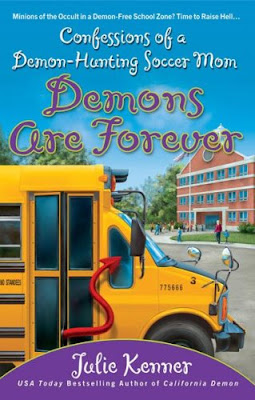 Kate, the demon hunting soccer-mom, is back, juggling play dates for a toddler, her teenaged daughter, her husband and his political machinations with the complexities of hunting and killing demons.

With the demons yet again coming to San Diablo, Kate is faced a more evolved and ongoing threat as well as the fallout from her daughter finally learning the truth about Kate and her secret double life. Of course, once she understands she has a lot of questions – and Kate isn’t sure how many she can answer, especially in relation to Eric, her dead husband who apparently had a life and machinations he kept secret from her as well. A secret that got him killed – and may still have considerable bearing on what the demons are plotting today.

I said before that this series had an interesting gimmick, but that it couldn’t live on the gimmick any longer. While it is intriguing and new to have a housewife as a demon hunter, juggling her life and commitments while still trying to run her secret life killing demons, it’s a great hook but it’s not the basis for a full book series and could quickly grow tired.

And this book avoided that. We have a much more focused plot with a lot less side distractions or her mundane life being described in as much detail. It’s still there, certainly, and remains hectic but we don’t have as much page time dedicated to these tasks. Instead, we have a much more involved and winding plot. The demons are back again and up to something but there’s a definite meta developing with their plot line, something to tie in the whole series in an ongoing devious scheme that brings all of these demons to this town that Kate chose because it was safe from demons.

In addition to the demons developing more into an ongoing threat rather than one off encounters, we have considerable increased complexity with Kate telling her daughter what she does and her (and her dead husband’s) past. Not only does this free up some of the familial duties but it also adds a whole new dimension to the story with Kate’s worry about Ally wanting to join in the fighting, with her concern about the demons targeting her and Kate’s constant battle as to exactly how much she should tell her daughter

Which is, in turn, complicated by David, the freelance hunter who may or may not have Eric’s (her first husband and Ally’s father) soul inside him. This is a wonderfully complex and emotional storyline with Kate torn between the man she used to love, the man she used to hunt with and the father of her daughter, and her current husband and father of her son – who she does love, but who doesn’t know her past or about her hunting demons. It’s a wonderful, rich, nuanced conflict that adds a lot of depth to the book.

Throw in, on top of that, Kate investigating exactly what Eric was up to and we have a lot of plot here – but it’s all interwoven. She can’t investigate Eric without touching on issues of what to tell Ally and without considering the whole David/Eric issue nor without looking at the ongoing demonic scheme that is apparently involved in San Diablo and throughout the Forza. It’s really nicely done to have all of these plot lines touch each other, even though they’re approached separately.

That’s not to say that Kate’s life as mother and (aspiring) political wife isn’t still there. We still see her juggling child care commitments, PTAs, volunteer work, social commitments and her family. And it’s excellent that they are there on two fronts.

Firstly, because it’s nice to see someone juggling the fantastic with something that is so mundane. A lot of Urban Fantasy protagonists either just don’t seem to have a day job (often having infinite money because they/their lover is just that rich. And really, if your 400 year old vampire is super rich one would assume some of that came from actually doing stuff, even if it’s just calling his stock broker or business managers, rather than putting his money in a hole and expecting it to breed), or if they do it’s either extremely flexible, deeply involved in the supernatural (quick quiz – how many Urban Fantasy detectives can you think of? If you can’t count one for every finger you’re not even trying) or otherwise both extremely fantastic and easily ignored. A substantial amount of Urban Fantasy protagonists never have to worry about money, about scheduling their time and often don’t even have to worry about family (beyond love interest or a distant “my long lost cousin Bernard who hardly appears in the story is being threatened by the bad guy for extra drama!”). This makes Kate a very original character. She has family who is there to be more than just imperilled – yes, they are imperilled but that’s not their sole purpose of existence. She has commitments. She has a budget and these all make her much more of a relatable person.

Secondly, she’s a woman in her 40s and a mother. This is not a common protagonist in the genre by any stretch and it’s really nice to see. It’s nice to see a woman who isn’t in her 20s or (*gasp* in the dotage of her 30s!) actually being the protagonist and primary actor. It’s nice to see a mother have her own story rather than being a support role of someone else’s. It’s nice to see her frustrations and annoyances and her struggles, nice to see her as something other than either a villain or perfect, distant figure (or absent figure entirely). And she even likes to have sex – and is even attracted to men other than her husband (sort of). She is a character that we hardly ever see – not as a character. As background, yes, as cut out, yes. But not a character and certainly not a protagonist.

She also has good relationships. Not just with Stuart, her husband (which is perhaps the weakest largely from absence and the secrets – we see the strength of it when they’re together but, again, we also see the strain that her secret life causes), with Eddie (an excellent parental/mentor relationship with all the best gruff edges) and her daughter Ally (who is far more than an imperilled prize and is actually a person in her own right) and especially with her friend, Laura. Ok, that last, I admit, is somewhat contentious because Laura does spend most of her time researching for Kate, cooking for Kate, babysitting for Kate and otherwise presenting a pretty one-sided relationship. But Laura does have her own issues that Kate references and shows some level of concern towards, I think it avoids being an exploitative relationship and appears more as a “triage” situation. I envisage this:
“My husband is leaving me!”
“Demons are trying to eat my children!”
“Well, damn, talk about stealing my thunder.”

I would like some more focus on Laura’s issues, but I still think there’s a strong friendship there and Laura is a great character in her own right, strong, capable, enduring, resourceful without being the kick-arse fighter. I think this is vital to make sure you have strong female characters as opposed to a strong female protagonist who is an exception to the rule.

It’s a shame that on top of that we have Nadia, the hunter who drops in, gets on Kate’s nerves, makes blatant come ons to Stuart AND David – and both Kate and Laura slut-shame her aggressively. It’s a shame that, with good female characters, we then get the sexy woman = evil trope.

In terms of other inclusion – it’s poor to worse than poor. We have complete erasure of GBLT people and POC, but her martial arts instructor/trainer/guy she spars/flirts with is a White man who has given his gym a name that implies he’s Asian for business purposes.  It’s all kinds of nasty and sums up the entirety of the books non-inclusion.