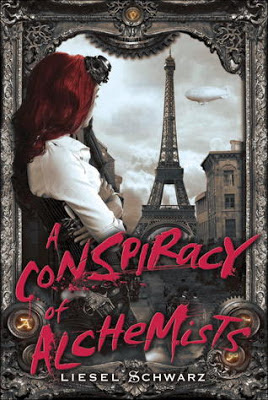 Though society would much prefer that Eleanor Chance to remain docile, akin to all women of good breeding, Eleanor refuses to live such a confined life.  Having turned her back on a making a good match at her debut, Eleanor now supports herself as a dirigible pilot transferring freight. Things were going well for Eleanor until Patrice, an acquaintance, arranged for Eleanor to fly a small package from France to England, much to the distress of Mr. Hugh Marsh.  From the moment Hugh and Eleanor meet there is clear tension between them, largely due to Marsh's sexist beliefs.

It isn't long before Eleanor is drawn into a world of vampire, alchemists, fairies and warlocks.  None of this is at all in alignment with her faith in science and everything rational.  To make matters worse, her father has been kidnapped and Eleanor learns that despite all of her faith in science, she has been bestowed with a birthright which makes her the balance between light and shadow in the world.  Can Eleanor put a stop the coming clash and make sense of the legacy bequeathed to her by her mother?

A Conspiracy of Alchemists falls into the genre of historical steampunk.  Like all steampunk, science and wonderful steam creations are central items in the story.  Schwarz does a wonderful job with the setting and elements like a trip on The Orient Express add a great level of authenticity to the story.  Throughout A Conspiracy of Alchemists, there is a consistent feeling of a world on the cusp of great advancement, as the rules surrounding gender and convention begin to shift.  It makes it quite easy to see Eleanor Chance as a precursor to Amelia Earhart.

Eleanor is a very strong protagonist and is quick to defend herself when needed.  She does not see herself as a damsel in distress and seeks to be adequately prepared for situations as they happen. This is buoyed by the fact that on several occasions, she actually saves Hugh's life and in the end, is able to stop the plot engaged in by the alchemists. Eleanor never succumbs to rushing off ridiculously but instead attempts to take the most logical approach each time. It is further gratifying that in this world brimming with male privilege that it is Eleanor who holds the real power.


I must say that I was quite irritated by the romance between Hugh and Eleanor.  On several occasions Hugh clearly manipulated her and lied by omission and yet, despite all of her logical faculties, Eleanor continually forgave him.  How many times can one be manipulated before deciding that trusting your betrayer is not a good idea?  I found this to be a contradiction in what is otherwise a very strong and capable character. The way that this is handled makes it appear that as long as one's intent is good, the level of manipulation is immaterial.

I further found it interesting that despite his acceptance of Eleanor's power, Hugh originally feels that she should freely sacrifice her life to the warlock council.  He many not have agreed with the council's methods but he certainly saw it as Eleanor's responsibility to submit. It is only because he fell in love with Eleanor in the end, that he turned his back on the archaic council and not from a strong sense of moral right and wrong. This did not endear him to me as a love interest at all.

Steampunk has a long history of erasure and A Conspiracy of Alchemists falls into the same vein.  Other than a speculation by Eleanor that Hugh may "prefer the company of men," there is no other mention of same sex attraction, or GLBT characters.  The characters of colour were all promoted into obscurity and only appeared on the Council of Warlocks.  On the council itself there are two men of colour and their role in the story comprises of 2-3 pages. This is not inclusion and falls a form of clever tokenism.  Obviously, in terms of inclusion, A Conspiracy of Alchemists leaves much to be desired.  This sort of omission is quite common in steampunk; however, it is never acceptable.  If a world can have vampires, fairies and fantastic machinery, there is no acceptable reason for it to be devoid of well drawn historically marginalized people.

I read A Conspiracy of Alchemists rather quickly and did indeed enjoy Schwarz's descriptive writing style and attention to detail.  The story itself was quite easy to follow and the historical aspect added something new to the steampunk genre itself, in fact, for that alone, it would be worth reading this book.  There were however times when I felt that Schwarz's attention to detail meant that the story itself didn't progress as quickly as it should though.  In all, this is a good first novel and something I am sure that fans of the genre will find an interesting entry.

Editors note: A copy of this novel was provided by Netgalley