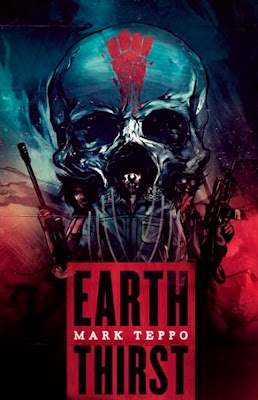 Silas is an Arcadian, a blood drinking, sun avoiding, earth dwelling child of the Mother, on a mission from her and the Grove to desperately try and combat the tide of destruction humanity inflicts on the planet. It’s a desperate fight, one they seem to have already lost, but the Arcadians have many gifts to help them.

Despite this, Silas’s latest mission falls apart, badly. So badly that it’s impossible that it was merely an accident. It seems the Grove itself may have been compromised and he cannot return to the Mother. Worse, his opponents had a new weapon, a chemical that burns Arcadians and does far more damage than simple bullets ever could to the ancient warriors.

He frees the only person he feels he can trust, Mere; an investigative journalist with strong experience in challenging large, multi-national agricultural companies and they begin unravelling the knot of what is actually happening

But as they travel the world, do the research and piece together Silas’s shattered memories, there’s clearly far more going on than they expected with at least 3 distinct players and it has ramifications far beyond Grove – and maybe even Mother isn’t what she seems

I have to give this story all kinds of praise for its originality, because it has a truly remarkable concept. Vampires as environmental guardians, resisting the corruption and pollution of the world. The whole sleeping in native soil myth which Urban Fantasy often discards now brought back to have vampires connecting with the earth to heal, avoiding the sun because, combined with airborn pollutants, it harms their chemical sensitive bodies – it’s a wonderful twist on the old legends.

It’s tempting to think of these vampires, these Arcadians, as gentle because of their environmental leanings. Humans are over-consuming, polluting and, ultimately, disposable if not outright in need of culling. They are warriors and guardians, fully willing to use their deadly skills to protect the Mother.

The whole concept and the world here is incredible, and that’s just made more so by this globetrotting story across the southern hemisphere unveiling more and more of the mysteries around this multi-faceted conspiracy. It’s complex, it’s action packed, it’s extremely well paced and it’s huge – a true sense of being global about it

There’s also some great commentary on activism and empty gestures – ignoring corporate control and over consumption in favour of gesture politics that gets in the news and makes people feel good – the whole putting a “save the whales” sticker in your Hummer, mindset.

Silas is an interesting character – he’s a soldier, he follows orders, he fights for the Mother – and he doesn’t question and he doesn’t think a lot. Until everything is broken open, the mission goes south, allies turn against him and there are enemies all around and no-one he can rely on. Contrast that with the excellent character of Mere, intrepid investigative reporter, used to unravelling mysteries, exposing the bad guys, the corruption and finding he most convoluted and complex of motives. They really work together as a team, bringing an awesome combination of strengths to the table and each being very strong and very capable in their own right. I loved these two characters together, loved how they worked together and loved how they tackled the story together.

We also had another excellent character in Phoebe. Even though she doesn’t have a massive presence in the books until the end, I like her because of the way she contrasts with Mere, giving the book two strong, capable female characters who come from different moulds. They’re both strong in different ways, Phoebe’s more active, physical and independent with Mere’s excellent investigative skills.

With such excellent female characters, I had hoped for some decent POC. We have a Latino villain (one of the villainous groups) and background or randomly met POC, but not much else. We have no GBLTQ people and there’s a lot of side and minor characters we pass making for a decently hefty minor character base.

The main story problem I had with this book is that I found it confused and confusing. I think part of that is thematic – it’s a thriller investigation. The protagonists are desperately trying to find out what’s happening, they’re confused, there’s all these forces allayed against them and they don’t know why or who they’re connected or whether the forces are working together or what they want or anything and it’s a desperate race to find out and discover exactly what everything means. So there’s a thematic reason for all this confusion. We have the Grove and Escobar and Kyodo Kujira and Securitores and Hyacinth Holdings and some of them may be connected and some of them may not be and some are working together but it’s temporary or they’re enemies or or or… and this one wants to kidnap an Arcadian alive, and these want tissues samples and these want to kill Arcadians, but the one who wanted a live Arcadian just killed a prisoner and and and… It’s very tense, it’s very confusing, it makes you think and there’s a lot of razor edged tension caused by the protagonists facing these things they just don’t understand and desperately need to find out before it’s too late. There’s a wonderfully well played sense of “what’s going on?!” And it all gets even more glorious when one of the given allies of the book, the force we KNEW was the good guy, then gets serious question marks put over them and we suddenly have nefarious actions and dubious intent.

But this goes too far when we also add in Silas’s fractured memory. The Grove removes some of his memories to help him deal with his extremely long life, but that has left him with holes and buried memories that are often triggered, bringing him flashbacks and insights – but they often seem irrelevant to what’s going on, add completely unconnected information and just add another oddly shaped piece to an already very convoluted puzzle.

It doesn’t help that things we should know, things the characters know, seem to be kept deliberately vague and confusing to add to the tension. Like at no point in the book does it explicitly tell us what the Grove, Arcadia or the Mother actually IS. Or how an Arcadian is made, or what they are. Or even why the sun sometimes burns them and sometimes doesn’t (something about air pollution?) They come across Escobar and it’s a while before we come close to piecing together exactly who he is. What does drinking blood actually do for an Arcadian? Is eating meat a bonus? Not a bonus? These are things we should know, these are things the protagonist knows and not knowing them is just adding to an already very confused world.

In the end, I found the amount of confusion and work needed to read this book detracted a lot to it. There was the tense thrill of the unknown but it was pushed too far – but beyond that, the story, the concept, the characters are excellent. It just needed its mystery to be a tad less mysterious. If you work at it, this book is really, truly awesome – but you do have to work at it.

A copy of this book was received through Netgalley