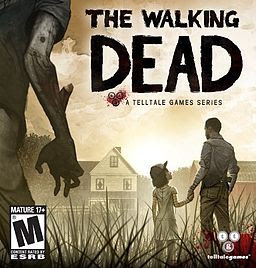 When I first got this game, I thought it was going to be a Resident Evil style survival horror – I’d get to run around a building or complex or city with lots of guns and blow the heads off zombies while collecting oddly primary-coloured healing herbs. Yes, they’re a guilty pleasure of mine. Tension would come with things leaping out at me from behind doors, or hordes of enemies to gun down or even a big bad that just won’t die.

Not that there aren’t tense action moments. But they aren’t “how many zombies can I kill?” moments. No, they’re you scooting backwards with an injured leg, your back hitting a car with nowhere else to go, trying to load a shell into a shotgun while the Walker crawls after you and then dropping your only shotgun shell! An entirely different kind of tension but still very nerve wracking.

But, more than that, it’s a game about hard choices, again like the comics and the series. It’s about deciding who lives or dies. It’s about forming a group, forming a relationship with them, having real characters and companions – and then them dying, and then not being able to save them.

There are several moments when someone will die. Will. You can’t save everyone, you won’t save everyone and often you have to choose who lives or who dies and even to save yourself at the cost of others. And you often have to make these decisions in split-seconds, Walkers don’t wait for you to ponder the ramifications. Some people will hate you for what you have to do, some people will be evil in the dystopian world and you’ll have to decide what to do with them. Some won’t be evil – but will still be dangerous. And when seeing several of these dangerous people there’s then a question of who to trust, if anyone.

This is also a story where things and people change based on your decisions throughout the game which creates another difficulty – not just on deciding who dies or not – but how to interact with the party. When they have arguments and disputes, who do you support? What if you agree with one but the other is your friend? Can you risk alienating people? What if something is the right thing to do but not the safe thing? How far do you go? It says a lot about the quality of the game – writing, graphics and voice-acting – that all of these combine really well to make these decisions matter.

I don’t know if I’d call this game fun. In fact, having completed it until the next chapters come out I would definitely say it’s not fun. Fun games don’t leave you chanting “no” at the screen and the ending scene doesn’t leave you feeling vaguely beat up and sad. It’s powerful, it’s emotional both in ways that you hardly ever see in the computer games. There’s no happy ending, there’s no easy answers and you don’t leave with a happy sense of victory. In short, it’s incredibly true to the comics and the TV series – it’s desperate, it’s character driven, it’s tense, it’s difficult – not in the sense that it’s hard to play, but that it forces hard choices on you – and it has a realness to it that other computer games only wish they could manage.

It also helps add texture to the game and the comics - it's easy to shout at their bad decisions, much less so when you, in a moment of fumbling panic, killed that Walker with a noisy gun rather than a quieter bludgeon.


This game also did something very unusual in terms of inclusion. In most computer games, your avatar is a straight, white man. That is the compulsory character you play. In some computer games, you have the option of changing skin tone or gender (these, usually, won’t change any of the dialogue in the game and often end up as cosmetic). A very few have compulsory female avatars and a teeny tiny few will have an option for a GBL avatar.

So, in most cases you’re playing a straight, white, male character with, less often, the option not to. This is one of the few games where your avatar, your compulsory avatar, is a Black man. Not only that, but you actually mention race in the game – and challenge racism (I don’t want to make it sound like we spend the game dishing out lectures – because that’s what people always seems to assume when we say “challenge racism” it’s more simple – someone assumes you can pick a lock, you a university professor, because you’re Black and you slap it down, that kind of thing). We meet other POC on the road, including Clementine, the girl we are determined to protect. There are a lot of women and they’re in diverse roles – mother, vet, soldier, journalist, good, bad, caring, tough – different. Like most computer games though, there were no GBLT people

My final words? I finished this game feeling rocked and slight exhausted. But I also finished it deeply impressed.