Review: Elemental: The First by Alexandra May 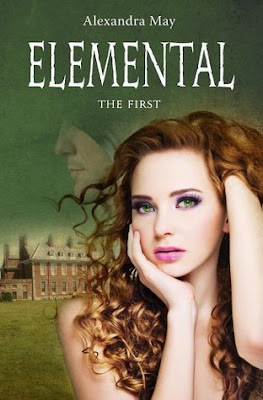 Rose Frost has had a difficult childhood moving from place to place due to the demands of her father’s job – and it has only been exacerbated by her odd gift, a gift she doesn’t understand and has scared her in the past.

Her father’s job has now lead her to live with her grandmother, Daisy, while her family move abroad. Long estranged from the family, Rose remembers little about Daisy’s home in Warminster, Wiltshire but quickly re-establishes the few old friends she has in the area

But people are going missing in mysterious ways and there are definitely secrets being kept in the town. Not least of which the mystery of Halika Dacome, goddess, saviour, perhaps even devil who is constantly referred to – and who haunts Rose’s dreams and may be the key to everything – her gift, her family’s secrets and the enemy that is hunting her.

This book is probably a decent prologue for the series. I now know who everyone is, what everyone does, I have the world building, the concepts, the relationships, the setting – I have all the information for the whole book series now.

But it’s a long prologue and I kind of wanted to read a book, not a prequel for an actual story. I think this book can be split into 3 parts. In the first, we have a brief introduction where we’re introduced to the idea that Halika Dacome is going to be reincarnated into a young girl’s body and that there’s a bad guy who wants to kill her and he has a grandson who’s not exactly on board for this plan.

Then the bulk of the plot where we follow Rose who is 16 and has an odd gift and lots of hints about someone called Halika Dacome. And there’s a boy who is attracted to her but everyone says is a wrong ‘un and he has an evil grandfather. I felt a little like I was given the answers and then was asked the question – but everyone was acting like the question should be a great mystery.

It doesn’t help that for the majority of the book she never explores this power. She uses it to find a mysterious box she doesn’t open (I’m still not sure what this box is for?) and she uses it to make herself warm when she’s cold, even when someone is found well and truly mangled and tortured she doesn’t use her ability to heal. The result of that is that for, maybe, 75% of the book we have a paranormal novel with precious little of the paranormal – it’s a mystery, it could be a famous five book.

And the mystery kind of lost me as well. People are going missing and, since one of them is the father of a boy who is the friend of Rose’s friend, the plucky teens decide to investigate in between going to coffee shops, going to picnics, meeting a bewildering array of people and getting odd shoe-horned in references to Halika Dacome inserted into the story but never really developed or revealing anything. At some point during the investigation they decide that the big bad guy is involved because… no-one likes him much? And then they’re interested in a ruined church and ley lines and gems and vacant property – and just a lot of info pushed in that is connected by vastly implausible leaps of logic. They don’t tell Daisy, Rose’s grandmother, she with all the answers because they don’t want to get her in trouble/don’t trust her/reasons?! Which ends up with both Rose and Daisy constantly telling each other “we need to talk about important things” (please god TALK ABOUT THEM!) and never actually doing so! Anything seems to take precedence to speaking with the woman who has all the answers – even when Rose is (or should be) blazingly furious with her.

There are events or elements that I don’t get either. A car blowing up… why? Mira’s accident. Rose’s headaches. None of these added anything to the plot.

When we finally get the big reveal and the supernatural taking a part, the book ends. Just as it’s beginning, as we finally know what’s happening and the supernatural elements are moving forwards and it’s time for the meat of the story – the book ends. They sit down, have a great big grand reveal info dump and then end. I actually sat there flipping back and forth in shock that the book ended there! But you’ll be pleased to know that we do get an info-dump explaining what was blatantly obvious from the very first chapter.

I had great trouble identifying with Rose – not just because she had some classic tropes (like being the most beautiful girl in the room but thinking she was the ugly duckling or how she arrives and absolutely everyone likes her and thinks she’s special, the love triangle of 2 guys she finds utterly fascinating enough to be hurt by them not being with her after about a week’s acquaintance) but because I just couldn’t understand her. I couldn’t understand her lack of curiosity – she just accepts everything. She isn’t curious about nor does she explore her gift, she doesn’t question Daisy when it was clear she knew things, she isn’t curious about how Morgan knew about her, she just accepts that a military unit is following her round every waking moment because of her dad’s job. Her sister doesn’t get back to her after weeks of trying to get in touch and she doesn’t even have a second’s worry?

For that matter, in the huge damn info-dump at the end she believes it! A completely unbelievable fairy tale and she swallows it?

And when it comes to Morgan her reactions are bewildering. She doesn’t trust him even slightly. Except when she trusts him with all her secrets. She gets enraged with him “spying” on her because she trespassed in his house (after expressly being told not to) and he had a hidden camera there! She’s furious with him because he doesn’t mention the blocked up tunnel under his house when there was absolutely no reason he ever should. She’s furious with him because she thinks he slept with another girl despite it being a) utterly obvious the girl was lying and b) he being a crush of about 5 days duration. Contrast that with her relative indifference about Daisy having soldiers watch her every move after promising her freedom.

I really did like the author’s familiarity with the setting and it is clear that the author knows Warminster well. But at times I think perhaps, too well. There’s a lot of information and events and description that is rather unnecessary. At times it felt a little brochure-y, like I’m being encouraged to take a holiday in Wiltshire.

Inclusionwise we got nothing. The female protagonist was annoyingly trope laden, her pro-activeness (when it appeared, because she accepts so much without a blink or question) came off as bossy since she was the new comer handing out orders and everyone seemed to revolve around her often without good reason. The other female characters are all just satellites orbiting around Rose.

This book had a great concept, a very original concept when we finally discovered it. But its execution was poor and dull, with a lot of unnecessary fluff and a character I found particularly unlikeable. I was extra frustrated by the answer being there and easily obtainable if Rose had just chosen to seek them. I will probably read the second book simply because, having mine through all this I might as well finally get to the actual plot, but it will be more from frustrating, unfulfilling ending than actual anticipation.