Review: Zombie Whisperer by Jesse Petersen, Book 4 of the Living With Zombies Series 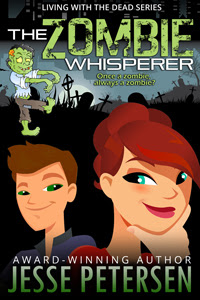 Sarah and Dave have managed to find a safe place – inasmuch as anything is safe after a zombie apocalypse. They’re hold up, isolated, capable of defending themselves and well stocked up to face the coming year. They’ve even come to terms with Dave’s half-zombie nature and use it to their full advantage. The only problem is Sarah’s growing restlessness. After months of constant fighting for survival, the quietness of their lives is wearing on her.

That, and the fact she is pregnant. And, with Dave the father, who knows how much of the baby is human and how much of it is zombie?

But visitors arrive with that rarest of commodity, hope. A chance, maybe to cure the zombie plagues, a chance to put the zombies down, a chance to restore the world to what it was. A chance that rests on Sarah and Dave – but it’s a chance that requires them to trust these people. And if there’s one thing the zombie apocalypse has been very clear on, it’s that there are very very few people out there you can trust.

One thing I’ve always loved about this series is that it’s fun. It’s funny, it has a lot of lightness about it, it has a lot of snark about it. Yet it manages to balance that level of snark and fun with a full sense of the dystopia and fear that comes with it. Yes, the parties are getting a little more blasé about the whole zombie killing thing given how long they’ve been doing this, but there’s still always that edge of fear and worry. We have the dystopia, we have the end of the world feeling even while keeping that lightness and that fun about it. In this book it’s less due to the horrors of the zombies and far more down to the horrors of seeing their home, Seattle, in ruins and seeing what the zombie apocalypse has done to it. We have the wonderful combination of the heavy, dark emotion, the painful realisations that come with dystopia, the light and snarky fun and humour and the character growth with their loving, but not always smooth interactions and development as a couple. All three together in a wonderful combination. We even had a nod to the tragedy of what the zombies were – not just walking, empty monsters, but people, reanimated cruelly and driven by hunger and rage and pain.

I was also impressed by Sarah and Dave’s interaction with the army guys. They are suspicious with good reason – one of the staples of this series and dystopians in general is that when law and order breaks down, people can become even more dangerous than the zombies. But that suspicion never completely overpowered common sense. It was well maintained, their trust is not easily for sale, but they could also be reached. It was, again, well balanced and very relatable.

And I liked that this was a dystopian with hope – that is rare – they had an objective, they have a plan, they are actually working to solve this mess. I don’t consider this an essential of a dystopia by any means, but a long running dystopia is often going to struggle to find a natural ending (beyond “we died, all of us”) or any continuation without some goal to aim for.

An interesting dynamic of this book is between                 and Sarah over his super-zombieness. As a half-zombie, he doesn’t attract the attention of the zombies any more, they don’t try to bite him. That means he can take them out easily with no risk. Sarah, while extremely good at arse kicking, still runs that risk – unsurprisingly, Dave tries to protect her and Sarah resents it. There’s a lot of nuance in how the issue is dealt with  and it fits well with the ongoing relationship issues that Sarah and Dave have battled through and resolved throughout the series. A lot of these challenge issues of paternalism, had Dave reaffiriming Sarah’s strength and we had an awesome moment where Sarah shot Dave down for trying to manipulate her protectiveness over the baby

I did like that Sarah remained active throughout her pregnancy. There is a habit in Urban Fantasy that, when your heroine falls pregnant (a term that always bewilders me – it’s like she trips and crawls to her feet with a large 9 -month baby belly “aaargh, I fell pregnant, clumsy me!”) then no matter how touch, how strong, how badass she is, she instantly waddles (and it is “waddles” no matter how graceful she was before) her way to a fainting couch interspaced with regular bouts of vomiting, fainting and severe mood swings (usually causing weeping). It doesn’t matter if she’s strong enough to punt cars and powerful enough to defeat armies – get pregnant, to the fainting couch. Not Sarah, being pregnant didn’t massively change who she was, it didn’t render her the helpless little thing to be protected and coddled, it wasn’t treated like a disease or severe disadvantage. This is refreshing compared to what I’ve seen elsewhere.

I also like that Sarah isn’t the Strong Female Character who stands above all other womenfolk.  Lisa is as capable a fighter as Sarah and very like her in temperament  (I also like that, when riding to the rescue, her boyfriend is concerned but doesn’t try to stop her or play the protective “stay home and be safe!” role). Nicole is rather different but, again, she has her own  strength and determination.

This book didn’t have any GBLT characters and it had one Asian woman. In the past we’ve had such a small cast that the lack of inclusion has been less noticeable – I don’t say I’m ever happy with erasure, but when you’ve got 2-3 characters, it’s more understandable why not a lot of diversity is represented. This book not only had old-home week with a shed load of past characters coming back, but a few new characters as well.

This is the last book in the series and I have to say I’m sorry to see it go. It was a fun take on the idea of a zombie apocalypse, taking many of the things we loved and presenting them in a different light. And yes, it was amazingly fun to have a series about a grim dark future that still contained laughter – the skill it took to write this book to balance both the grim, darkness of the setting, the moments of poignant grief and fear and worry still having their impact while still keeping this light, fun, character driven focus.

It’s a shame it’s the last book, but I also praise the author for knowing when to stop it, with the conclusion it had, there wasn’t much story left to tell in this world without starting an entire new story arc. So it’s with deep regret we see the Living with Zombies series end – but it’s definitely one people should check out – and it’s put an author on our radar we look forward to reading in future.

A copy of this book was provided by this author for review.
Posted by Sparky at 3:00 PM