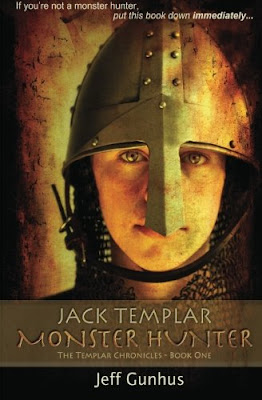 Jack was a normal 13 year old boy looking forward to his upcoming 14th birthday. Until he starts going through some changes – greater strength, greater speed, greater fighting skills, it’s like a super hero’s origin story. Though becoming a hero isn’t nearly as fun as he expected it to be, not when people are frightened of the new, different you.

Far less appealing are the monsters, the Creach. Disguised among humanity, they’re watching him and beginning to show themselves to prepare for his 14th birthday. They time when he comes of age in the monster world – and becomes fair game to hunt.

Suddenly he’s on the run, backed up by hunters he knows nothing about, learning new, shocking things about his family history, finding out the family he does know are completely different from what he imagined and discovering that so many of the people around him were secretly monsters, watching him, waiting for their chance.

This book has a rather unique  writing style – and I think it’s going to be a “love it or hate it” moment. It’s written as if the protagonist were remembering his story. It’s also written as if he is presenting a warning/guide to other hunters: Jack is warning the reader against reading the book, giving hints and tips on how to kill various monsters, little mini-lectures as if an experienced hunter were recounting an experience to a new hunter. It’s something that is maintained even on the author’s website (with a password found in the book to allow real hunters in without the “creach”) It’s an interesting and certainly unique style and has a very strong spoken word feel to it as well. You’re either going to love its unique feel, or you’re going to find it frustrating.

The plot itself is very action orientated – and the action is done well. We have monsters hunting the newly of-age monster hunter just as his physical abilities kick in

I can’t say I like how the story came together – I think the big bad was defeated too easily and rather anti-climactically, I think Jack had a massive about-face of personality and character pretty close to the end. I’ve seen a lot more extreme a 180 character turns and it had some justification, but this felt very abrupt. It almost felt like the author wanted to hurry the story along or was afraid of losung momentum. I also found the villains a little cartoony – not necessarily in a bad way; it had a cheesy style that was fun in its own right.

I think this book is setting up a series. There’s a lot about the world, the hunters, why jack’s so special, that all needs explaining. A lot about origins, a lot of questions unanswered, a lot of hints without back up. It was well paced in terms of keeping the action moving, but I think a lot was leaped over in the process – but all of that can be easily addressed in a second book in the series. There was definitely enough world building to keep this story moving. I think we needed some pauses though, not just for the world building but to absorb the impact of the losses - of the sacrifice. Especially since the rather awesome, powerful and poignant slogan of the hunters is "Do your duty, come what may." With the hunters willing to die - not even hesitating - when needed to save Jack, I think that would have had far more impact if they'd had more chance to reflect on the loss and relate it to that saying. There's a powerful theme there and it's done well - but far more could have been done with it and with these really good scenes.

There are several physically capable female characters in the book – his aunt and the two other hunters. I find his aunt the most intriguing and would have liked to have heard more of her story – her conversion was a powerful one. I do think all 3 could have used further development (and do think that Eva may be developed far more in later books and I’m intrigued that Master Aquinas is a woman who leads the hunters and that they don’t feel the need to differentiate titles based on gender) but at the moment they’re pretty much “women who fight”. But, then, this book is very much focused on action after action after action with little in the way of character development for anyone.

While the book doesn’t have any minorities, Jack’s two friends come from difficult backgrounds that are touched on in a way we rarely see in urban fantasy. Often when we have a character who has a difficult life or childhood it’s fodder for pages and pages and pages and ye gods pages, of dramatic angst, grief, recriminations and other stand-ins for actual character building. In this case the traumatic lives the friends live is somewhat understated; one is struggling to stay with his family and friends even as his guardian, his grandmother, succumbs to dementia and child services want to take him away. His other friend is covering for an abusive father, trying to hold his life together even as he comes to school with bruises. Neither spends a lot of time talking about their situations and we don’t see a lot of them either – but what we do see, what we are told, is powerful and has a lot of impact and emotional content – perhaps more so because we don’t have pages of exposition about it.

I could see a lot of good in this book and I’d actually highly recommend it. Unfortunately, for me, it had stylistic elements that I don’t particularly like. Not because they’re bad or poorly executed or anything like that – they’re not. I do think the book does an extremely good job of pulling them off – for all its writing style the book is well paced and the action keeps coming. Jack is something of an everyman but still forms powerful friendships and attachments. The villains may be cartoonish but they have that dramatic, evil flare that a good cartoon villain should have. It’s excellently done – but not to my personal, subjective taste. If I have one objective criticism, it's that the book needs more depth to it, more oomph - it's more a series of fights strung together and it has the potential to be a lot more.

A copy of this book was received through netgalley
Posted by Sparky at 3:00 PM