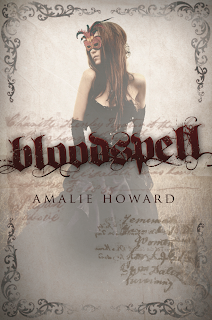 I can’t. It’s no use, I just can’t finish this book. The characters, their contrived, useless conflicts, the intriguing world that is hopelessly undeveloped and, above all, the immense cliché abuse just defeat me, Not only can I not finish this book but, since I was tempted to DNF it after a mere 10%, going any further would be unfair to the other DNF books that I finally gave up on.

Now, saying you’re tempted to give up by 10% is pretty extreme – but this book begins with so many of the classic clichés, tropes and general fails that I was cringing.

Firstly, we have a prologue paragraph telling us there’s a law that forbids vampires and witches from consorting.

Right, folks, who can tell me what the plot is about? If you answered “it’s about a vampire and a witch falling in love” have a cookie. I have no idea why we have this new habit of giving away the plot in the opening prelude, especially when you have damn little plot, but it has to end.

Then we have a girl, bullied at school with dead parents (mark off two more points on your checklist). She has super special powers she just doesn’t want because she wants to be normal, wooooe! Yes, it’s another teenager with super powers who just wants to be like everyone else – like every teenager never. Mark another cliché off the checklist. Oh and she has a book that may guide her about her specialness but she just can’t bring herself to read it because it’s just too awful

She goes to a new school and meets a vampire (no he’s not labelled as such but after the opening prelude why even pretend this is supposed to be a secret). And ZOMG he’s hot and awesome and hot and sexy and hot and has an amazing voice and he’s hot – this goes on for a few paragraphs.

Then we switch to his POV  - actually, brief interlude for a side rant: the book keeps doing this. There’s no chapter break or anything else, we’re suddenly in Christian’s head rather than Victoria’s – suddenly her thoughts are a mystery and his are an open book. Then we whiplash back again – no rhyme or reason, no necessity, just constantly switching back and forth clumsily to allow more exposition

And yes, it’s all about showing AND telling. If Victoria thinks Christian looks sad, she will describe his sadness, then we’ll go into Christian’s head to describe that yes, he is indeed sad. Interspaced with massive infodumping that is repeatedly shown or can easily be inferred but the author treats the audience like we’re a bunch of concussed kittens who can’t read any subtext at all. Which is probably why the opening paragraph appears just in case we didn’t get the not-so-subtle-clues on the way.

Anyway, I was distracted by the awful writing – back to the first 10%: so we then enter Christian’s head (and yes, he’s a several hundred year old vampire going to school because… no, no reason, just because. After all, of course your 200 year old Parisian vampire aristocrat is going to go to a private school in rural Washingto - errr, Maine!) and he finds her awesome/sexy/hot/pure/wonderful/compelling/amazing/etc etc etc.

At this point I think they passed each other in a corridor. They have had zero meaningful interaction but both think the other is the most amazing thing in the world ever.

But there’s more! Because not only are we going to have that old forbidden love thing coming to bite them on the arse, but it turns out that good/musty vampire Christian who never ever kills to feed because he’s a good vampire, can’t resist her! She smells so good, he can’t be near her or he will drain her dry, nomnomnomnomnom! She just smells SO GOOD TO Edward- sorry, Christian. Can’t imagine why I mixed them up.

Finish off with a pretentious hobby – am I the only one who sees a trend in poorly characterised YA protagonists having a pretentious hobby dropped on them to provide some rough attempt at character building and make them seem extra special and not like their shallow, lesser peers? It’s usually classical literature, classical music or long dead artists. In this case it’s classical music (we get to long dead artists later for a twofer).

And, of course, vampire Edwar- err, Christian plays the piano like a super virtuoso saintly amazing person who expressly the true depth of the tear jerking emotion he holds in his heart through his music and they can have pretentious conversations about classical composers to show how they’re not like other teens.

From there we engage in the most painful relationship drama you could ever wish to avoid. It’s not just that the endless conflicts are ridiculously contrived – but that they’re none of them developed or resolved. So Christian keeps driving her away for her own safety (I hate that trope). I think he does it three times. And each time he lasts maybe… 8 hours? Before going back to her because she’s so irresistible. Then we rinse and repeat. In between Victoria decides he’s just so cruel and awful and mean, but that usually means that he just doesn’t hang around with her – I mean it’s presented as him being cruel to drive her off, but that’s largely him not falling head over heels in love with her and not trying to spend time with her – which she then interprets as the worst thing ever.

Anyway, they establish a relationship and Christian pulls some self-control out of somewhere and no longer wants to scarf her down – or the author forgets. But now we have Victoria discovering her powers are dark and dangerous and could kill Christian! She knows this because they decide – for some bewildering reason – to try and kill each other to practice their powers and find out their addictive lethal abilities are indeed addictive and lethal. I know, I’m as shocked as you are! Anyway, she then decides she has to be allll alone. For about a week. Then she wants him back because none of these convoluted conflicts can ever develop! They just appear and peter out without being resolved or developed or made into any kind of pointful inclusion to the story! They just happen and then everyone decides to move on to the next one!

The “I could kill you” conflicts eventually run out of endless repeat value only now Christian has remembered that pesky vampire law and has reservations so Victoria decides that she hates him and thinks she’s ugly and she’s met so much hotter and better women and how awful is she and… yeah, because Christian would totally give you this idea by never looking at another woman, ever. Nope, she just pulls it out of nowhere because we’re trying to fit ALL the romance conflicts in this one. Which is where we met my breaking point – Victoria discovers Christian made a vampire over 100 years ago and clearly he must love her more than Victoria, and how could he look at another woman over a century before she was born?! Oh how could he that evil mean person?!

And I put the book down. I was done. Past done. This relationship isn’t between two over-emotional drunken children  because emotional, drunken children would have SOME logic to their actions. They didn’t. They just went from ridiculous conflict to conflict, with no basis, no development and no resolution to any of them.

The relationship was the breaker, but there was plenty more wrong with it. Victoria has 2 friends when arriving at the new school – one who hates her on sight and is so mean, and then Charla. Charla who helps Victoria from the very first day. Charla who is nothing but kindness. Charla who tells her she has a desperate crush on Gabe who is determined to keep her as a friend-with-benefits. Charla who says how very very jealous she gets over Gabe. Guess which boy Victoria decides to kiss to make Christian jealous? That’s right! Gabe. And guess who she has private study sessions with? And guess who keeps flirting with Victoria? She’s a classy friend that Tori.

Through in Leto, the info-dumping familiar, who communicates telepathically without using italics or speech marks or anything. Really, there’s NOTHING to differentiate telepathic communication from normal thought or just the basic description of their actions.

We also have Christian’s evil twin who is of course an evil, sadistic, murdering monster to Christian’s mustiness – because there always has to be an evil counterpart. But both Christian and evil-twin’s law breaking doesn’t matter because the council of multi-millennia year old vampires are, for reasons that are never explained, completely terrified of the brothers so occasionally tut under their breath at the naughtiness – which means even the conflict over the forbidden love peters out into pointlessness.

There was just nothing in this book that interested me or drew me in. I was skimming when I wasn’t just hating everyone on the book. The plot went nowhere – any actual plot of Victoria’s developing powers is derailed by the ridiculous romance and the endless rejection of those powers. It’s boring, it’s undeveloped and the endless clumsy clichés are used in the place of any actual plot or character development. This is writing by the numbers and I feel vaguely proud I made it as far as I did. Other reviewers have declared it to be a rip off of another series - I don't think it is necessarily, simply because this book is made up entirely of strung together, overused cliches that it's impossible not to see parallels of other books in it. It resembles other books because it has precious little original content and just rehashes the same tropes we see a thousand times.