The Queen is Dead (Immortal Empire #2) by Kate Locke 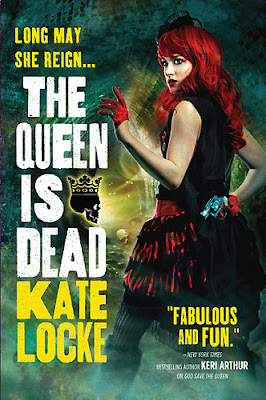 Xandra has had a lot of changes in her life – from half-blooded Royal guard to goblin queen. Despite being monarch, she seems to have lost a lot; her family no longer trusts her, she’s lost her job, she’s lost her home, she’s earned the enmity of Queen Victoria herself, she’s become a tabloid sensation – and universally feared. And she still doesn’t know what she wants to be or become – she’s not ready to make those decisions.

But she doesn’t have much time to delay, not with her brother going missing, possibly falling victim to the same conspiracy that her mentor was part of; experimenting on unusual half bloods to see if they can be used to increase aristo numbers and tip the balance of power. With her own unprecedented goblinhood and her sister giving birth to a full blooded vampire, her family are prime targets for experimentation.

And, of course, Victoria is breathing down her neck, with the police following Xandra trying to find out what happened to her mentor. Being harassed by the police and demonised by the press doesn’t  make investigating any easier

This series has one of the most original world settings we’ve come across in Urban Fantasy. The idea of a modern Steampunk – a 21st century world, with the immortal vampire Queen Victoria ruling over it – creates a really fascinating world when it comes to tone theme and aesthetics. We have many of the elements of the modern world and a similar level of technology, but all with a Victorian twist as the elites of the society are still from that era. So we have minidresses – with corsets. The technology is subtly different, there are mores of etiquette in high society that still have to be upheld. Yet all of this is done without a lot of info dumping, this different feel is given with a few descriptions of clothes, the way people talk and different words for things like motorbikes and mobile phones that make it clear what they are while still having a strong hint of a more steampunk aesthetic.

There’s a lot of research that has gone into this book making sure that the places visited are very close to actual London with the necessary changes for the setting. I particularly like references to obscure things like the church of St. Andrew by the Wardrobe.There is also a generally good maintenance of tone, keeping the Britishisms intact and the new vocabulary from the setting. Occasionally it does go over the top though – like the details of the geography are very accurate but also long winded and not strictly needed. Or a generally well done Xandra will spout long string of slang and profanity that is just a little excessive and fake – like her Britishness is really trying to be rammed home. I don’t know how noticeable it would be to someone who isn’t English, however.

There are a number of POC in this book and a lesbian couple who are just included without fanfare. They may not have a massive role, but they are there and fully integrated without undue comment or inference as well as a natural assumption that they’re going to get married and there’s no issue with that. While they’re background characters to a large degree, they’re refreshingly free from problematic tropes.

There’s also Penny, a transwoman. Penny isn’t a background character by any stretch and she plays a pretty major role in the story and is very valued by the whole cast, despite that she is a mixed bag of good points and fail points

On the plus side, none of the main characters misgender her or ever question her gender; anyone who does is seen as being extremely out of line and in strong need of a slap. Similarly the transphobia from her father is presented the same way. It’s also clear that her gender is not based on whether she is taking hormones or has had – or is pursuing - surgery or not.

On the negative side, she is referred to as tr@nny once in a way that forgets that’s a slur and once as a drag queen. And while Avery and Emma’s lesbian relationship blends seamlessly into the setting, Penny being trans is mentioned quite often and not allowed the same level of background integration.

This book has some excellent running interpretations of class – people who disappear, who is looked for and who is ignored, who can act and break laws with impunity, the divide between half breeds with acknowledge aristocrat parents and those without. There’s lots of constant references to how social status affects everything and makes for different rules and considerations.

There are several female characters in the story, and most of them avoid stereotype and show their own capability and strength as well as their own agendas. Her mother, Avery, Penny, Ophelia. They don’t have super huge roles (but no less so than the men in Xandra’s life as well) and they’re not as super as Xandra – but then, she’s a goblin and she’s a queen, they’re not meant to be or expected to be and her greater capacities are clearly labelled as because she’s a goblin. They have flaws, but they’re the same flaws that we see in the men around her as well.

I also like that Xandra, while having many reservations about goblinhood who she can’t help but consider monsters, still revels in her powers. This is something we hardly ever see in urban fantasy, a heroine with special abilities who likes it. She likes her strength, her agility, the fact she is physically more capable than those around her. She embraces that much at least even before she accepts herself and her position.

Her relationship with Vex is also excellent – especially for a werewolf romance! He doesn’t try to dictate to her, to stifle her in the name of “protecting” her and he is only a shred of jealousy (and, considering it was an old ex and first love she was worried about, that joking thread of jealousy was rather restrained). He’s also wise, kind, understanding and an excellent foil to counter any attempt of hers to curl into a ball and blame herself for everything. I keep waiting for the shoe to drop, but it doesn’t.

This series naturally deals with different groups and their own fears and prejudices – the fear and hatred of the goblins, the fear of the human masses by the vampiric and were aristocrats, the rivalry between the vampires and weres, the regarding of just about everyone as food by the goblins, the human’s fear and hatred of just about everyone, the halvies standing awkwardly in between, depending on their upbringing and not really fitting anywhere: feared by humans, used by the aristos. But despite all these prejudices and hatreds, the book is very careful not to draw parallels with actual oppressed or marginalised groups – or oppression in general. Every group has its own power, which Xandra acknowledges and even when considering things like mobs of humans after her, she acknowledges her own personal strength as a goblin and political strength as their queen; even while acknowledging her own prejudice against humanity. It’s an interesting, multi-faceted, nuanced look at intertwining prejudices where no side can be said to be overwhelmingly dominant.

This makes for some excellent meta plot behind the exciting events of the day. The ongoing experiments of the aristos are just  symptom of the larger power struggles that dominate the political life of this world – and Xandra, with the goblins behind her – is now poised to tip the scales massively in any direction. I love Machiavellian politics and love that this series is going to go deeper down that route as more every faction tries to court Xandra’s favour. This series should just keep growing and getting better – especially if the author keeps up the combination of excellent, fun book-long stories interlaced with this growing and epic metaplot.