Carnival of the Cryptids 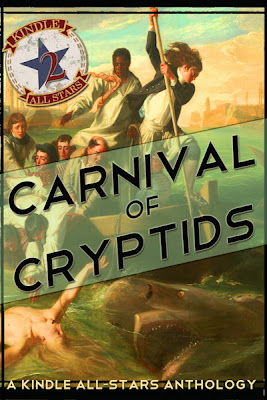 Anyone who has read my reviews will know I have a problem with short stories. I find them terrible paced – and can generally only tolerate them when they are part of a series and then have a strong foundation to build upon. A stand alone short story I generally don’t like and avoid – they’re either rushed and don’t cover anything in enough depth and leave a lot unanswered or they’re stretched out and never had enough meat for a story in the first place.

So I approached this book, an anthology of stand alone short stories, with a due sense of suspicion and dread.

And was happily proven wrong.

There is one story I wish had more development – Six Gun Diplomacy (an awesome story of roving trouble shooters in a great western, gunslinger style) – because I felt there was a lot of the backstory and apparently huge world that could have been built upon. This isn’t really a criticism of the short story per se – it was actually my second favourite in the book – but more praise for the characters and the world that seemed so much immense fun and to be so rich as to positively demand more stories and more development. It’s a waste of a perfectly good setting to limit them to this one short story.

Most of the rest were beautifully contained: like Where is Captain Rook (a story of European explorers trampling casual on the mysteries and lands of Native people), The Cage (a story of humanity and freedom and exploitation and what it means to be a person) and Oh My Darling of the Deep Blue Sea (a story of grief and loss and living with that loss) with all the information, character development and story neatly encompassed within the story. Everything was covered as much as it needed to be and not a word more. They were very artfully and consciously written and designed from the start to be short stories. They left no threads unfinished nor anything hanging or brushed over. They were tight, contained and extremely meaningful and powerful in their presentation. There was a lot of emotion packed into them

Other stories certainly left threads unfinished – The Ogopogo Club (a moving story of abuse and endurance and determined vengeance) and ABC (a creepy story of the unknown in the mundane and the normal, cover ups and secrets) but they did it by not even trying to end them. The relevant parts of the story have been told. The mystery, the unknown, is part of the story and the very essence of what a cryptid is about. There’s no attempt to bring these to a close because them being left open is an inherent part of what the story is about. And, again, it’s really well done

My favourite of the entire book was The Paring Knife. Not because it has any great plot but because it was so damn funny. A spoof of Master Chef/Iron  Chef/etc etc etc using Cryptids as ingredients, it’s one of the few books that not only made me laugh out loud, but actually had me helpless with laughter.

The only story I didn’t like was the odd filler that was used to glue all the stories together. It was odd, a little incoherent, tied to hard to be relevant to each of the stories and wasn’t remotely and tried clumsily to convey a message which it failed badly to pass on. Worse, it was written in the second person; no-one writes book in the second person and there’s a reason for that – it’s a bad idea. Don’t write a story “you did this, you did that”, it’s a story not an RPG and it didn’t work. It felt contrived and left me with a constant running commentary of “no I didn’t. I’d never do that. No I didn’t, I don’t have a sister. No I didn’t, I don’t even know what those coins are.” Using “you” doesn’t make a story more intimate, just jarring.

Other than that, the only real problem with this book was its complete lack of unifying theme. Yes, it’s all about creatures of legend and myth, the cryptids, but the theme and tone of the book is all over the place. We have mysterious, spooky stories full of more questions than answers. We have very close to reality possibilities, like ABC about alien big cats. We have stories that are poignant and painful, less about monsters and more about personal story and grief and endurance like the Ogopogo Club and Oh My Darling of the Deep Blue Sea, through to some deep commentary with Where is Captain Rook? And The Cage. Then we have awesome adventure wildness with Six Gun Diplomacy going through to the utter awesome comedy of The Paring Knife. All of it split by odd, random second person inserts.

On their own most of these stories are awesome and powerful, each in their own way. The fun action packed are really fun and bursting with extremely well written action. The deeply emotional ones with powerful human stories are moving and eloquent and evocative, full of emotion and stark realness and a true sense of what these people are going through. The ones with commentary are insightful and sharp with undertones and overtones and so many messages wrapped up between them. The funny ones are hilarious. But you put them together – glued together with this awful second person ramble – and they don’t fit. Particularly since the stories are very short – so you get one emotion well established, then a heavy whack of confusion from the filling before running into a massive gear change for the next story. Going from the deeply painfully poignant Oh My Darling of the Deep Blue Sea, to the hilarious and light hearted The Paring Knife is like changing from 5th to 2nd gear while going 70mph down the motorway. It’s jarring to say the least.

Which leaves me saying to get this book. Get it, because it’s more than worth it. Get it, not just because all the proceeds from this book go to charity (though they do), get it because the book itself is a worthy addition to any shelf. But don’t read it back to back, cover to cover, like I did. Treat each story as a separate entity and read them separately. This book is a rainbow, each colour needs to be appreciated in its own right, but mix them all together and you get a weird kind of muddy brown that detracts from all of them. Appreciate each one for the gem that it is – and don’t force them together on a shoddy mounting to create a gaudy mess.