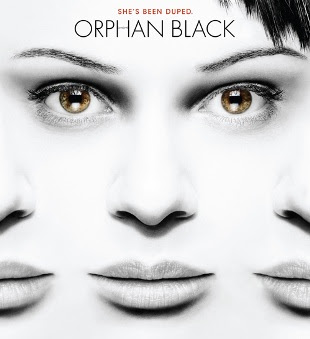 Allison wakes up before her husband and checks the memory card on the hidden camera to see what happened during the night. There’s a moment in the early hours of the morning when he gets up and looks at her then leaves – but then the card is full.

Actually starting the day he’s a lot less patient than usual and snaps at Allison over various things that haven’t been done around the house. She asks him where he was in the night but he snaps at her about how busy they are and how much they have to get done right now. He leaves to do some shopping still snarking at her – and she hits him with a golf club.

Ok then. That was rather disproportionate.

Sarah is having an easier time talking to Paul because he’s not unconscious from a severe head injury. He’s very quick to point out her own lies and conning him – about having sex with him without being who she said she was which means both quickly put aside some of the moral outrage. They – whoever they are – have leverage over him and he knows very little about the whys of what he’s been made to do. Sarah doesn’t trust him – and does a runner out of the bedroom window. Hey at least he’s conscious

Sarah calls Cosima about Paul and she says from a scientific point of view that it makes sense that the monitors know so little so they can’t skew the results. She’s also concerned about Delphine being friendly since it may be her own monitor. Hmmm… maybe but Cosima was the one who made friendly overtures to Delphine… Sarah advises her to keep away which irritates Cosima since she is being treated as the “science monkey” and Sarah isn’t following her own advice. Cosima goes on to talk to Delphine, saying she’s bored, and gets an invitation to a “Neolution” lecture from her

Allison, with her concussed husband, then decides to interrupt to call in Sarah to help with her whole assault and battery thing. Getting rid of the kids she then drops her husband down the stairs. Oops. On a far creepier note, Paul has a bug in Beth/Sarah’s car and is tracking her. And then he starts grinding pills up into one of the booze bottles.

Allison’s husband, Donnie, wakes up tied to a chair. Hey Allison gets stuff done. When he dodges her questions she starts playing with scissors in a very disturbing fashion. Then she uses a glue gun (even she’s shocked by that but doesn’t back down) to ask many questions while Donnie denies all. Which is when Sarah arrives and has a total “what have you done!” moment. Which gets worse when it turns out there’s a pot luck to be hosted at Allison’s house. Oops, pesky social commitments.
This leaves Allison to go play hostess with the moistest while Sarah pretends to be Allison to question Donnie (quid pro quo!). Time for Allison to call on Felix to come play bar tender – dropping his afternoon with an apparent client, since he was in bed with a man who paid him.

Time for Sarah to put on her Allison accent and start the interview while Allison bumbles about upstairs and her friends think she’s drunk. Donnie confesses to getting up in the middle of the night to watch cricket and thinks Allison is out of her damned mind and needs to know everything about his life. He tells her to get her “PMS shit together” and Sarah/Allison temper snaps and she tells Donnie that his wife is the rock of this family and how dare he speak to Allison that way. Nice, not good for undercover but still great.

Paul, meanwhile, meets with the sinister Olivier and tells him that “Beth” is taking pills, quitting her job and in her “dark place” again. Olivier doesn’t mind and won’t blame Paul – so long as Paul doesn’t interfere, any result is evidence; this seems to also include Beth being driven to suicide. Which has ominous undertones when we consider the bottle Paul spiked.

Cosima goes to the lecture with Delphine and it seems that Dr. Leekie’s Neolution involves cybernetic enhancement of flawed human bodies. Choosing evolution as a human right. After the lecture, Cosima asks Delphine about the possible eugenic interpretation of his Neolution before Delphine, in major fangirl mode, pulls her to meet him. Delphine fangirls, Cosima pulls out her cynicism.  And when everyone’s looking the other way steals 2 bottles of booze much to Delphine’s horrified delight. And in the aftermath we have a possible flirty moment – or just Delphine kissing Cosima’s cheek because she’s French

And to Vic – breaking into Felix’s home to check his lap top which has directions to Allison’s. Where Felix arrives dressed in his impression of “suburban” to try and patch the party together because Allison has well and truly lost it and is out of her brain. He rescues Allison from various questions and Chad, one of the guests, hails the novelty of a gay bartender. Sarah tries to comfort Allison as they come to the conclusion that Donnie probably isn’t her monitor (especially since they’ve known each other since highschool) and Allison passes out from the booze.

Things get more complicated because both Vic and Paul head to Allison’s house. Sarah goes upstairs to talk to Vic and Paul sneaks in the back to find Allison passed out and Donnie tied up. In the room with tied up Donnie Paul uses the lap top and Allison’s hidden spying device to watch Sarah and Vic talk. He goes upstairs to pose as Sarah’s employer in the scam to drive Vic off – until Vic draws a gun. And then Aynesley, Allison’s very good friend, joins the conversation just to add a bit more complication, Vic and Paul leave so Sarah, as Allison, can listen to Aynesley pour out her heart about her arsehole husband, Chad. After back and forth, Aynesley comments on “Allison’s” changed shirt and how strange she’s acting – and how she intends to investigate.

In the garage, Vic is quickly and painfully beaten down and disarmed by Paul. Paul has questions for Vic, lots of questions about Sarah. He also has a nail gun. Which is when Sarah comes in and Paul threatens Vic to try and make her co-operate. When Sarah has to wrangle one of Allison’s children, Paul nails Vic’s good hand to a chair. Ok, I think we can conclude Paul is officially a villain.

Speaking of suspected villains – Aynesley goes snooping in the shut off downstairs and finds Allison passed out. She helps her to her bed.

With the nailed hand and beat up face, Sarah kicks Vic out and tells him not to return. Take the hint, man. And then Aynesley pops up AGAIN, in the garage this time, bemused to find Sarah/Allison awake and not in bed. Paul reaches for the gun and Sarah steps in, grabbing his hand and pretending they’re having an affair. Aynesley finally backs off.

Hectic party is over and Allison goes to bed with her freed husband Donnie who is Not Happy, what with the being tied up, beaten with a golf club and torture thing. She describes it as a break down and tries to talk about it – but after Sarah chewed him out, Donnie admits fault; she is the rock of this family. And in his special box wasn’t just porn but letters with woman he once had an affair with in the past who later developed lupus and he never heard from her, he kept the letters because he has no idea what happened to her and wanted to keep some reminder of her. He apologises and cries, breaking down in Allison’s arms.

Paul and Sarah arrive at Beth’s flat, and he grabs the poisoned booze. She tells them they’re clones and that they’ve counted 9 so far. He puts the poison booze back and picks up another. She tells him that’s what he’s for – monitoring a clone.

And we close seeing Delphine meeting Dr. Leekie in a hotel room, apparently in a sexual relationship

I am both disturbed and impressed by how good Allison is at keeping someone prisoner – she doesn’t just gag she blindfolds and ear muffs them!

Felix is a prostitute now? And even that takes second place to running to Sarah’s aid? Someone check the bingo card, I think Felix may have missed a stereotype (next week he’ll be cutting hair while ice skating and we can cry bingo). It’s not like they were desperately in need of a bar tender there or there was any real emergency to get him involved in.

I wonder why they’re going with Cosima and Delphine – the treatment of Felix makes me worry. But I do like Cosima and want to see more of that line beyond science monkey

I have to say I was sure Donnie was a minder. But the dodging and weaving to try and keep their normal lives, especially Allison’s, the very epitome of normal, together is a story in and of itself.