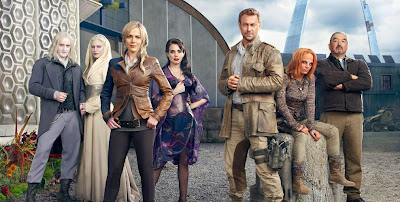 A busy day at Defiance market when a Castithan man spots a human man who is apparently looking for him and we have a chase scene until the Castithan trips and falls. The man thinks he’s got him, points his gun – only to have the Castithan throw an explosive and almost escape. Until Nolan comes out of nowhere, pins him and cuffs him. The man who was chasing points a gun at Nolan for stealing his target then they recognise each other, Nolan calls him Eddie.

To the Lawkeeper’s office where Nolan takes his old friend Eddie’s guns (Defiance maintains a no weapons policy for visitors). Eddie’s a bounty hunter for the Earth Republic and the Castithan is wanted in Yuma. In the cell the Castithan is being treated by the Awesome Dr. Yewl and recognises her. He praises her for her amazing scientific achievements during the Pale Wars, but promises to keep them secret. In particular he mentions the “Biodyne project”. He tries to get her to let him out with strongly implied blackmail, Yewl tells him he has the wrong person.

Eddie just wants Nolan to deliver the Castithan, but Nolan wants him to stand trial in Defiance since his explosive took off a grocer’s leg. Which is when Tommy comes in to confirm who the Castithan is – Pol Maddis, the Castithan who invented that particular explosive. He’s a weapon’s designer, a very talented one, who made weapons during the Pale Wars. Eddie’s bringing Maddis in for warcrimes which Nolan cynically notes must be worth a lot of money to him.

To Need/Want for a drink and Eddie trying to make his seeking a pay day seem more acceptable. And Irisa arrives and isn’t that impressed with Eddie since he’s making disparaging comments about Irathients when she comes in – but he remembers her as a little girl and considers himself her uncle.

The argument doesn’t end – Nolan wants Maddis in prison but Eddie still wants his payday so Nolan gives him some money- for drink and a prostitute. Eddie has his eyes on Kenya and there’s an awkward moment when he realises Kenya and Nolan are together – but Nolan steps back and recognises Kenya’s choice to do her job.

She takes him into her room but then suddenly remembers a scheduling conflict. Eddie thinks it’s because she doesn’t want to sleep with Nolan’s friend (which he seems fine about) but Kenya says she’d sleep with his brother if he had the money – but calls in 2 other girls, on the house for him.

Time for Nolan to argue with Amanda about Maddis. Nolan pushes delivering Maddis with his friend Eddie to Earth Republic, getting lots of goodwill and him out of town quickly, before Amanda faces an election. Amanda wants to use him to negotiate an extradition treaty with the Earth Republic, with Maddis being sufficient incentive to convince the Earth Republic to give right of way to their new maglev. Amanda doesn’t trust Eddie either- a bounty hunter and scavenger.

In the restaurant, Quentin is researching the cave paintings he and his dad saw. And he’s joined by Nicky, the ex-mayor (and secret bad guy). After playing nice she goes to sit with Birch and tells him Quentin must have found the artefact that Luke had.

Lawkeeper’s office – and poor Tommy trying to figure out what he has with Irisa while she, not very encouragingly, sharpens her knives. And Maddis gets something passed to him through the grill of his cell.

At Need Want, Kenya talks to Amanda about Nolan and Eddie and how she didn’t feel comfortable being with Eddie because he was Nolan’s friend. Because of that she considers breaking up with Nolan, evidently having bad experiences in the past

And at home Quentin tells Rafe about Nicky’s questions which has Rafe spooked – he wants rid of the artefact. Quentin thinks the caves and the watch (it’s a watch?) are related to an Earthquake in 1911; but Rafe doesn’t care, interestingly he’s afraid of Nicky and calls her a dangerous woman.

There’s an explosion at the Lawkeeper’s office – Irisa and Nolan run to check. Tommy is unconscious and Maddis has escaped. Nolan finds a scrap of paper residue and goes to confront Eddie. The explosive used to free Maddis is one that Eddie knows and has used before. But Eddie points out if he had freed Maddis he’d already be out of Defiance with Maddis to hand in the bounty. Nolan agrees and gives him a gun to help hunt him down.

Maddis, meanwhile, collects his stashed case of explosive components, killing someone to get it back.

In Amanda’s office, she gets to play host to the new Earth Republic ambassador, Connor Lang, who Amanda apparently knows. He implies incompetence on Nolan and Defiance’s part for letting Pol Maddis escape. Their argument is derailed by a big shed load of sexual tension. They agree that Defiance will get the right of way for their Maglev at Oklahoma City and Earth Republic gets Maddis – if they can find him quickly. Because if they don’t’ a convoy of Earth Republic rollers is on the way to tear apart Defiance to find Maddis.

Nolan and Eddie go to question Yewl as someone who has the technical skills and supplies to provide the explosive components but she doesn’t crack easily and has her perfect, awesome snark to Eddie’s aggressive questioning.

Maddis is Datak Tarr’s house (aieee, the blinding white everywhere!) eating his food. He introduces himself to Datak Tarr in a way that tells Datak he is part of the Voltanis collective and Datak welcomes him and plans to smuggle him to Brazil and the Votanis capital. He goes to call his contacts but Maddis distracts him with food and friendly conversation – and Datak pulls a gun on him and tells him to get out. He tells Maddis he supports the Votanis but Maddis’s actions jeopardise him in Defiance. Maddis accuses him of being a traitor, sending money to the Voltanis to assuage his guilt while he assumes whatever culture will benefit him the most. But Maddis has slipped something in the food – that unleashes debilitating painful current into Datak when he uses his ring, making Datak drop his gun.

Down in the mines, Quentin prepares to destroy the artefact as his dad told him to – but the hallucination of his dead brother Luke tells him not to. Is this supposed to be a literal hallucination or representative of Quentin’s inner conflict? Or a ghost? Or some other random woo-woo? In the end, he pockets the artefact.

Eddie and Nolan do their patrol with Eddie assuring Nolan that Kenya really likes him. And they search Datak’s house – Datak is very friendly and welcoming even in the face of Eddie saying they suspect him because they’re both Castithans. When they leave, Maddis makes Datak drive him to the checkpoint. Datak talks about his worry he’s not doing enough for the Votanis collective but Maddis doesn’t care – he just likes killing people.

Which is when the Lawkeeper’s car shows up, forcing Datak off the road. Datak asks how Nolan realised Maddis was with him and Nolan says Datak was nice – very out of character for him. Tommy and Irisa take Datak home – so Nolan can let Eddie take Maddis. Nolan tries to mock Maddis with his upcoming execution and Maddis scoffs – he will get a luxurious lifestyle with the Earth Republic. They don’t want to kill him, they want to use his expertise. He’s only running because he thinks the Votanis collective will pay more. And yes, Eddie knew. Nolan pulls a gun and shoots Maddis in the head. Eddie loses his shit, especially since the man complaining about WMD is “No Man Nolan” who believes in leaving no man alive.

Eddie pulls a gun on Nolan – there’s a 250,000 bounty on Nolan’s head which he will collect instead. Nolan protests that this isn’t Eddie – but he spent 6 years in prison after helping Nolan free Irisa, it changed him to become someone who will do anything to get ahead. While ranting Eddie gets too close and Nolan takes his gun off him

In a flash of guilt Nolan agrees to hand himself in to give Eddie his bounty and right the past wrong – so long as Irisa remains safe. But then the Earth Republic convoy arrives. Connar checks Maddis’s body. He rants at Nolan for being out of his jurisdiction and committing murder – to which Eddie puts his hand up to the murder, claims he did it. Eddie takes the fall for Nolan and is shipped to Vegas prison.

And Birch searches Rafe’s house, looking for the artefact he thinks Quentin has. Quentin comes in while he is search and Birch shock him and takes the artefact out of his pocket. The shock doesn’t last long and they fight – Quentin managing to pin Birch and strangle him while his hallucination brother Luke cheers him on.

At Need Want, Nolan tries to talk to Kenya about meeting up later but she shuts him down and says she doesn’t want to meet – it seems to be a break up.

On the drive to Vegas prison, Eddie asks for the innocuous components to finish off the explosion he’s carrying.

And in the mines Quentin dumps Birch’s body into a blue lava flow.

I liked that Nolan put aside any jealousy over Kenya and left it up to her whether she went with Eddie. He recognised her job as a sex worker was her job and it wasn’t his place to police it. Yes, Kenya chose not to go ahead – but it was her choice. Kenya, as a sex worker and the owner of Need Want, is strongly cast as someone who has her own strength and her own choices.

The justice system of Defiance leaves much to be desired – Nolan just kills people? Even with reason the lack of investigation or consequences is disturbing. I also think that they missed the opportunity to explore a lot of nuance here – which maybe they’ll do later with Yewl? Obviously during the Pale Wars there were major battles and deployment of WMDs; but what culpability do you have for weapons developers on each side? Where’s the line? How big does the weapon have to be before you declare the CREATOR to be the culprit, rather than the wielder? And how does that mesh with Nolan and Yewl using what must be described as a WMD against the Volge in the first episode? Where’s the nuance!

I’ve said it before and I’ll say it again – Defiance has so much meat to it it doesn’t need the woo-woo of hidden tunnels and magic trinkets. We have the Earth Republic and Votanis collective, we have the pressure of choosing a side or remaining independent. We have the Tarrs vs the McCawleys, we have Amanda as an inexperienced mayor trying to win support and juggle the factions – these are immense story fodder.