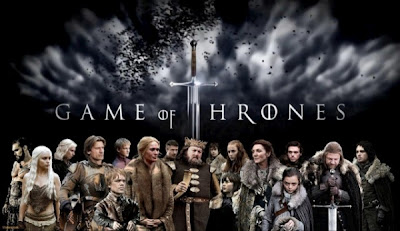 In the Riverlands: Arya & the Hound

Arya wakes up early and decides the best alarm clock will be a heavy rock applied with force to the Hound’s head. Unfortunately, he’s a light sleeper. Time for them to ride off and he warns her that there are men worse than him out there – she disagrees that there can be men worse than him and he points to his brother who is Not a Nice Man. He adds that there are violent people and rapists out there; and how he saved Sansa from the latter not long ago.

He’s also not taking her to Kings Landing – he’s taking her to the Twins to be with her mother and brother, for ransom. He also tells her about her uncle’s upcoming marriage.

Gendry is taken to Stannis who examines him and declares he is half-Robert and half low born. Gendry is taken away to be given a comfortable room and Stannis doesn’t see the point with lots of analogies to slaughtering a lamb. Looks like Gendry is headed to sacrifice.

In the dungeon, Davos is continuing to learn to read (and quite pleased by his progress) and Stannis drops in for a very awkward visit and belated condolences for his son. He also tells Davos about Gendry’s upcoming sacrifice – and Davos isn’t a big fan of Stannis killing his own nephew. Anyway Stannis has come to release Davos so long as he swears not to raise a hand against Mellisandre – he agrees, but adds he won’t hold his tongue and pushes further that Stannis doesn’t want to, why else would he release Davos just before the sacrifice of Gendry, knowing Davos would speak against it?

Stannis is still caught up in Mellisandre’s visions though – and of a battle in the snow.

Gendry is stunned by the wealth of his room and Mellisandre and he talk about the contrast between how they lived as poor people and the nobles; how he is unsure about every luxury, afraid he will have to pay for it. She instead turns to her religion and how to “draw” his power from him using the rituals of her god – which naturally involved nakedness and sex. The Lord of Light also requires kinky bondage and all this sex to happen with her fully naked and him with his trousers on. Oh and leeches. Yes leeches – and she brings in Davos and Stannis to watch.

Mellisandre is into some very very unusual kinks.

Taking the3  leeches full of special powerful king’s blood, Stannis casts each into the flaming brazier each with a name – usurper Robb Stark, usurper Balon Greyjoy and usurper Joffrey Baratheon.

Sansa is being primped by a stony faced Shae when Tyrion comes to visit. Feel the tension in the air. It’s their wedding day and Tyrion tries to reassure her that it wasn’t his decision but she won’t be a prisoner – though he reflects being married to him is a different kind of prison. It’s not great reassurance but it’s sincere. After much flailing, he promises her that he will never hurt her.

Meanwhile, Margaery is playing super-duper friendly to Cersei who Does Not Like It but has to put up with it. Cersei tells a passive aggressive little story about House Rain that was the second-wealthiest in the land, just like the Tyrells, and how it challenged House Lannister and how the Lannisters slaughtered them. What a pretty little story. She adds that she will have Margaery strangled in her sleep if she ever calls Cersei sister again. Well, that was overt. It seems Cersei has given up the subtle manoeuvring against the Tyrells. Hey, Margy, you’re marrying her son, you could always call her mother!

Sansa emerges – and Joffrey steps forward to give her away (they could not possibly make this wedding any worse). One long walk past all the assembled dignitaries to Tyrion’s side, where he removes a stool. The ceremony begins, which includes Tyrion putting a cloak (offering her his protection) across her shoulders, causing tittering across the crowd because Tyrion isn’t tall enough to reach Sansa’s shoulders without the stool that Joffrey removed, she has to kneel.

At the wedding feast Lady Olenna drives Loras from the table by gleefully describing to him and Margaery how messed up the family connections will be. And Tyrion gets steadily more and more drunk. Sansa excuses herself from the table when it’s clear how lost Tyrion is and Joffrey follows despite Cersei trying to head him off. And Tywin lectures Tyrion on being drunk and how he needs an heir (with a side swipe at Renly, of course) so needs to be sober enough to “perform.” Isn’t that a wonderful conversation to have with your father. Tyrion throws Tywin’s own insults back in his face

Lots of people are miserable – except Lady Olenna who seems to be immensely enjoying herself – and Loras tries to make conversation with Cersei but she just cuts him off and walks off. And Joffrey accosts Sansa, threatens to rape her and demand that Tyrion and Sansa go through some dire “bedding ceremony”. As he presses, Tyrion threatens to castrate him. Joffrey starts to explode and Tywin steps in – no bedding ceremony and he’s sure Tyrion didn’t mean that threat, did he now. Tyrion resorts to self-depreciating drunken rambling and leads Sansa away.

Alone with Sansa he keeps drinking and asks her to call him Tyrion. He also confirms that Sansa is 14. He tells her that Tywin has ordered her to consummate the marriage and she pours herself a drink. Sansa starts to undress, removing her elaborate over-dress, he stops her removing her shift. He tells her he won’t share her bed until she wants him to. She asks what if she never wants him to and he raises his cup and says “and so my watch begins” (a reference to the Nights Watch who are celibate – well, technically). He passes out on a couch.

They next day they’re wakened by Shae who is not even slightly solicitous of Tyrion, she also notes the unstained nature of the sheets on the bed.

Yunkai has hired a considerable number of mercenaries – including a band called the Second Sons, led by Mero, a Bravosi who Ser Jorah calls dangerous. Daenerys decides to meet with him – and she knows he’ll meet with her because a man who fights for gold can’t afford to lose face to a girl. Nice using of misogynist culture against them.

The meeting begins with Mero claiming he saw Daenerys working as a prostitute. She is unmoved by the crude insults and instead focuses on how much her armies outnumber the Second Sons. She promises to pay them well if they change sides but the mercenaries know that if they break their contract with Yunkai they will not find work again. She says they won’t need to – she’ll make them lords when she conquers the Seven Kingdoms; though the captain with Mero points out she has no ships, cavalry or siege weapons. Daenerys is confident she will get them. Mero himself continues to be misogynist and unpleasant and Daenerys still supremely unruffled – and gives him a barrel of wine to share with his men. When Mero leaves Daenerys tells Ser Barriston to kill Mero first.

At the Second Son’s camp, Mero (who continues to be obsessed with his penis and, naturally, has a half naked woman on his knee) and his 2 captains talk. After talking about prostitution, questioning the difference between being a mercenary and a prostitute and more, they finally decide to send one of their number in to infiltrate and assassinate Daenerys.

That night, the assassin (whose name I can’t remember so will hereby call Dragonbait) makes his way through Daenerys’s camp disguised as one of the Unsullied. Daenerys is in her bath being attended to by her totally not!slave honest, Missandei and they have developed something of a friendlier relationship – Daenerys stunned by the number of languages Missandei speaks and Missandei feeling comfortable enough (just) to correct Daenerys’s Dorthraki (she’s not as fluent as she thinks she is).

Dragonbait arrives and holds Missandei at knifpoint and reveals himself to Daenerys. But he’s not there to kill her (damn, do I have to learn his name now? Daario Naharis) and dumps the severed heads of Mero and the other captain on the floor. Daenerys gets out of her bath (naked, of course, complete with camera panning up her body). He agrees to fight for her – swearing the Second Sons to her (including “his heart”).

In the North where it’s really really cold: Sam & Gilly

It’s cold, they’re camping and they need a fire and Sam’s babble annoys Gilly because his greater vocabulary makes her feel like he’s trying to confuse her. They discuss a possible name for baby Nameless. She likes his father’s name but Sam asks her not to – because of his father’s cruelty. The crows start acting up and Sam goes out to check though Gilly wants him to stay inside. The birds are gathered around the hut. And a figure emerges from the dark.

A white walker, after the baby. Sam attacks him with his sword but the Whitewalker just grabs it and it shatters. He knocks Sam aside and advances on Gilly and the child. Sam grabs the obsidian dagger he got from the Fist of the First men, charges and stabs the Whitewalker. That works. The walker shatters and they run.

Tyrion’s drunken self-insulting rambles remind me a lot of his confession scene with Lysa Arryn – using terrible and ribald descriptions of himself to disarm people and make them back off. It shows a lot of complexity with his character, a lot of depth – the bigotry he faces and the way he has to negotiate it while at the same time suffering from it.

Actually I don’t have a whole lot to add this episode. Joffrey is still vile, Loras is still a toy, Renly, while dead, still gets snide remarks, Daenerys is still a great beloved saviour of all who is so very precious. Cersei seems to have given up political manoeuvring in favour of just snarling and lashing out. Are her anger and Tyrion’s drunkenness signs they are giving up or just angry acceptance?

After progress, the nudity on Game of Thrones is pushing back – with gratuitous nudity from Daenerys and Gendry managing to have sex with a completely naked Mellisandre through his trousers. And why is it all of Mellisandre’s red priest magic involves her getting naked and having sex? Thoros of Myr regularly uses his woo-woo fully clothed; why oh why is that do you think?