Chasing the Shadows (Nikki and Michael #3) by Keri Arthur 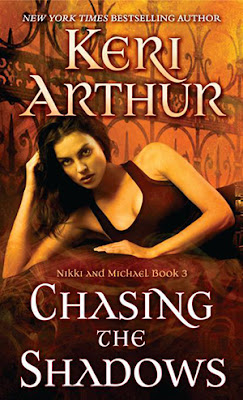 Michael has been spending a lot of time on missions for the Circle lately and not nearly enough time with Nikki; he misses her terribly. And Nikki misses him – but is equally frustrated that they’re apart because he won’t take her on missions with him. This comes to a head more and more as Nikki rejects his constant protectiveness, his refusal to let her go into any kind of danger and risk and his insistence that she stay at home.

Especially since she has a case – as a private detective with Jake – that takes her into the middle of Michael’s new mission. Women have been kidnapped only to later reappear mutilated and murdered – and vampires are definitely involved. Michael tries to get Nikki and Jake to stay out of harm’s way, but Nikki is ready to deal out an ultimatum on this; she will not be cossetted and cocooned and Michael has to accept that or their whole relationship may collapse.

The story is pretty well done except for two big caveats. It’s decently paced, we have a nice mix of description and action, we have a series of slow reveals and clues that general home in on their target. It’s a nice, decent, well written detective story with a nice balance between action and adventure, exploration and discovery. I could have liked it because it’s a strongly written book with some decent elements and a nicely maintained sense of drama, tension and emotion.

Except for Nikki and Michael themselves.

One of the reasons I hate the insta-love or fastforwarded love tropes is because, when you actually introduce conflict to their relationship, I’m left wondering why they even bother with each other. Nikki, as is her wont, even lampshades the whole ridiculousness of it when she points out that all they have is good sex. This is true – so why do they have all these massive declarations of love – why do they even consider themselves in love when all we have ever seen of them together is arguing or having sex?

This is particularly glaring to me when Michael both spends months away from Nikki and has completely ramped up his condescending protective crap insisting on wrapping Nikki in cotton and putting her on the shelf because she’s just too delicate and fragile to handle what he does and the risks he takes.

It makes no sense. Nikki grew up on the streets in a gang, she’s a private investigator, she’s a psychic whose powers are growing at an almost Anita-like rate. She’s not some delicate fainting flower who may get woozy at the awful awful violence. She’s also a thrall. His thrall. That means unless you pulp her brain or decapitate her she’s actually immortal. He may actually be easier to kill than her, what with his vampire vulnerabilities. The only big weakness she has is that if he dies, she dies. So to keep her safe he decides he needs to head into danger all alone and leave her behind?

What kind of alien non-logic is this?! Because no matter how I play it back, all I hear is “oh you delicate flower of womanhood, rest here and loosen your corsets – I shall send in smelling salts every 15 minutes lest the wallpaper shock your fragile countenance!”

There’s lots of talk of compromise between the two – but where do you compromise when one side is so completely wrong? He wants to wrap her in cotton and make her feel fragile (and they have an added friction with her feeling like a kept woman with him) and she wants to be treated as a full, active partner. Where’s the compromise? Where’s the room to compromise? His insistence that she be wrapped in bubble wrap is so complete that he won’t even take her to their HQ to have her powers tested to see what is happening with them. For added nausea, Michael is really condescending when arguing with her and continually calls her childish and even throws in a “I will treat you like a full partner when you act like one,” ooooh, really? Really? That line’s going to stand? Because that deserves a swift kick to the yin yangs, that one.

Ultimately, the fast-forwarded relationship meant I was left wondering why Nikki is with Michael – no matter how very sexy he is – because sexy is his only positive; we have nothing else of him developed enough to justify why she would tolerate his crap. Yes she constantly challenges him, but there is still a level of him being portrayed as somewhat reasonable and her objections are not listened to.

This is supposed to contrast against Jake and Mary’s marital difficulties – but the comparison falls flat. Mary wants Jake to slow down because he just had a stroke – and that following several hospital visits for injuries (and near death) he got on the job. He’s also not nearly invulnerable. She also presents a viable alternative. And, after years of living where he wants to, she finally wants to move to a San Francisco – or another, larger city. She also presents a compromise that is reasonable. The fact these two are presented together just makes me feel the unreasonableness of Michael isn’t really being accepted.

As an added problem this argument consumes a vast amount of the book. It actually comes across as being extremely self absorbed – here we have women being kidnapped, brutally tortured and killed and Nikki and Michael continually take time out so they can have another round of the same argument. It’s boring to read, it never develops and there’s only some vague concessions at the end. It got in the way of the story, bored me and irritated me.

My second caveat is that there is a nasty stripe of homophobia through this book. I’m going to delicately dance on the edge of spoiler here – but the big bad is attacking, kidnapping, torturing and raping women because they bullied him for being gay.

Throw in that there’s a good chance he isn’t gay because it’s never overtly said – just endless stereotyping and deciding he has an “effeminate voice” or once how he put down a glass in an effeminate way. How exactly do you even do that anyway?

So, perverse, bitter gay villain who we draw the line out of actually making unambiguously gay and then heavily garnished with some unsubtle stereotyping? No thanks.

This awful hot mess also constituted the only representation of anything resembling a minority. There weren’t a lot of female characters either - except victims and the never seen witch who telepathically pokes Michael now and then. There’s only Nikki and she’s generally embroiled in her squabbling with Michael with odd breaks for making silly decisions purely to spite him – and I can’t say I blame her simply because he is so smothering with his “protectiveness” I’d be tempted to abseil down sky scrapers just to make a point.

The next book? If we’re going to continue with Nikki and Michael’s relationship then I want it to be an actual relationship. Not sex, not fighting – show me something that indicates this couple is actually a couple. Give me something to invest in this relationship, give me a reason why Nikki tolerates him.

It’s also past time for some decent inclusion but, after this book, I don’t have a lot of hope for that.

I’d also rather there not be another kidnapping. 3 books, 3 lots of kidnapping. Or, at least them getting to the victim in time – honestly they don’t have a great success rate. And I’m beginning to think there are strong elements being continued in each book (a vampire enemy, a horde of fledglings, a kidnapping victim they have to find but won’t reach in time, some underground explorations – 3 books, it’s getting repetitive).

Work on those 3 and the next book could be pretty decent – but this book rather crashed and burned.