The Walking Dead Vol. 15: We Find Ourselves 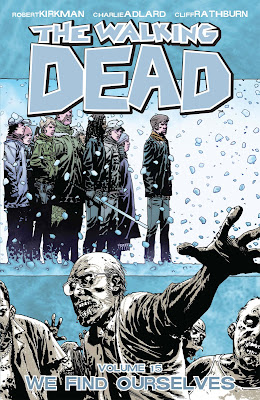 This volume represents a big shift in the culture of the Walking Dead. To date they have been all about survival - just living day by day and trying to survive in the zombie apocalypse world. Now they’re moving from surviving to thriving - to actually growing and living.

We can see this in many little ways; Rick changes from focusing entirely on keeping his family safe (which, tangentially, may save the others) to focusing more on the community as whole. From looking for somewhere safe they are now making plans to making the place safe - taking ideas how to protect Alexandria from a zombie horde and securing the sight for the long term, including thoroughly mapping the streets around Alexandria. Rick is even making plans of staying there for decades - he is in a position to look decades into the future. And these plans require him to have a full community - people working together are a resource.

They have gone beyond surviving day by day - they intend to live. It’s an important change.

But one thing about surviving is that you keep moving and don’t have time to stop and think. Now they’re in Alexandria, their dead are even buried in graves. They have time to grieve - time to relearn how to grieve rather than operate - as Michonne mentions - by getting by day by day. Rick has a breakdown, he tries to encourage Carl to feel and grieve again (even while acknowledging that the traditional masculinity he has been brought up with leaves him unable to express grief either), they begin to feel what happened to them catch up.
As for the Alexandrian group, we have Nicholas’s little fake rebellion basically based on ego, anger and fear. Their little bubble has been burst, they’ve lost their false safety and now Rick is in charge - a perfect person to blame.A scapegoat for their illusions being shattered and them no longer being able to stick their head in the ground and live in denial.

It was quite a slow week as far as action went, but it did cover a major change in direction of the group.

On issues, we have a few: 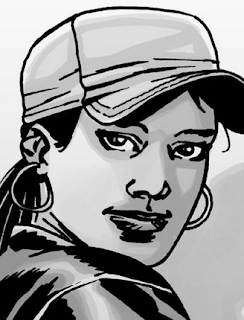 There are only two women of colour at this point in the story: Rosita and Michonne. What they both have in common is that neither of them are fully realised characters in comparison to the rest of the cast. Rosita simply exists to be a love interest for Abraham. We don’t know anything about beyond this point.  Rather than investing in Rosita they have chosen to draw her in a very stereotypical fashion.Yes, Rosita is a Latina, but really? Big hoop earrings in a zombie apocalypse? And where the hell does she find the time to get her eyeliner so perfect? Yes there is a segment of the Latino population who looks like this but it is problematic that they have chosen this as the sole representative of Latino culture without once giving her a developed character.  I guess with the look they chose to give Rosita, I should be thankful that they didn’t have her running around calling Abraham Papi.

In this volume, Rosita revealed to Abraham that she is aware that he has been sleeping with Holly.  Abraham revealed that now that Rosita is not potentially the last woman in the world anymore that he wanted to explore his options.  While this was written as situational lechery, it in fact worked to show that women of colour are disposable. As soon as a White woman came along, Abraham could not possibly be content with a WOC.  I know that there will be trolls thinking about the Tyrese/Michonne/Carol love triangle but this is far from the same thing.  White women do not have a history of being cast aside and constructed as inferior the way that WOC do.

There’s also a problem with Holly and Rosita - both Abraham’s love interests and Holly is as much a non-character as Rosita. “Love interest” literally encompasses the entirety of their characters.


Another problematic female character is Maggie - I’m not entirely sure what happened to this character who has become steadily more fearful and frail with every passing issue. I am hoping that this is part of her stopping and feeling as mentioned above - the past losses catching up on her - but her constant fearfulness feels like a terrible devolution of the character. Especially since her fear is used as more and more of an excuse to limit Glen’s involvement and make him less and less a useful member of the group - a trend that has been escalating from before Woodbury.

It has been a quite volume this week -  one of those volumes where you can feel everyone catching their breath waiting for the next drama - and the next death toll. I do hope we get some development of the background Alexandrians - there’s a lot of them and we only really have names.