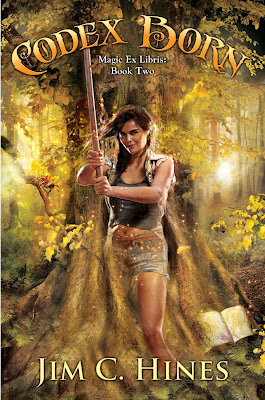 Isaac, Lena and Nidhi are developing their new relationship – but hardly have the chance to do so on peace before being called into the field again.

There’s been some murdered Wendigo – and Wendigo are pretty hard to kill.

But throw in some strange, lethal metal insects, creations of a dead Libriomancer and his far less fun father.

Then throw in the Devourers, dryads and a dragon and there’s certainly a lot to handle; all confused further by Gutenburg’s secrets and that nagging question as to whether or not they’re actually on the right side.

I love the very concept of this world. The idea of pulling things out of books – and now e-readers – and both the wonder and the complexity that can come with that. I love the geeky shout outs to so many books I’ve read and loved. I love just how much the love of reading and the power of it and this genre which we adore so much is all just worshipped in this series.

And things have got complicated – wonderfully, gloriously complicated.  We have an enemy – who everyone hates, even his allies and rightly so. Then we have an enemy who Isaac kind of feels sympathetic towards with lots of recognition of past injustice. Then we have Gutenburg who may be their ally and super powerful and he may have some extremely good reasons for his decisions – but he’s still done a whole lot of evil, he’s still keeping a whole lot of secrets and Isaac still doesn’t trust, despite working for him. And under all that you have the big nasty monsters that may try to eat everyone.

And part of that complexity is the complexity of the characters (while still giving us someone who is evil and we can hate without having to be complicated about it – because that’s fun too). The entire history of the Libriomancers is a fascinating one that’s been really well developed. I love the dispensing of the idea that Gutenburg is the first Libriomancer – the Chinese have been printing long before him and already had their own variety. At first it seemed like a simple case of Gutenburg attacking, slaughtering and stealing from the Students of Bi Sheng. But then lots of nuance get added:

Are we judging someone based on what they did 500 years ago? With attitudes, standards and thought processes that were prevalent at the time?

Gutenburg was involved in a war – not only did the Students of Bi Sheng fight him but multiples forces were trying to destroy him while he established his power – he saw it as a fight for survival.

And, of course, Gutenburg’s organisation did end up bringing order and peace to the magical world – albeit in a Pax Romana fashion.

I like how all of these are raised without in any way justifying or excusing what Gutenburg did or that it was wrong – even having Gutenburg admit it. The nuance is there for human complexity, not dismissal. And Isaac still acts against Gutenburg’s express wishes, especially when it comes to continuing what he started; and receives tacit support from Pallas and the other Libriomancers as well

The same applies to Gutenburg keeping secrets – it’s annoying and patronising and it could harm the Libriomancers – but at the same time why does a 500 year old with centuries of study and mastery over someone under 30 all his secrets and knowledge? Isn’t it reasonable for him not to trust or rely on people that much weaker and younger? And don’t the Libriomancers already trust him to lock books? Except, of course, that secrecy is equally used to cover up his nefarious deeds, build his legend and head off any challenge and criticism.

But then there’s the very nature of the Libriomancers – intelligent, brilliant, imaginative people who are caught up in and absorbed by books. People with infinite curiosity, massive imaginations and a slight inclination to poke things while asking “what if…”. I love them, it’s an absolutely awesome portrayal but equally adds credence to why Gutenburg may want to keep some things from them because they WILL poke at it.

In addition to all this human world building, I love nuts and bolts of the world – how so much thought has gone into making everything work. Like the body temperatures of the Wendigo (and a wonderful acknowledgement of where Wendigo come from) or how using magic to travel at super speeds means you risk friction burns from the air, or werewolves shifting in their clothes and being in agony because denim just doesn’t rip that easily and it’s the last thing you want constricting over your swelling nether regions.

I also love how a lot of the world building – the new ways of using magic Isaac is learning, the nature of the Devourer and a lot more doesn’t have a simple answer. Some things are theories – hotly debated theories – which is excellently realistic. Why should they know all the rules of magic? That’d be like us knowing every law of physics – real life doesn’t work that way.

One of the best items of world building we have is examining Lena’s past – because not only does it add a lot more detail to this character, build her and add to the plot as well, but it also calls out a trope in fantasy that has sorely needed it. Sadly, the comely nymph is not unknown to High Fantasy –and there’s certainly been some awful, trashy books that have included creatures little different from Lena. But by taking the story from Lena’s point of view, making these vapid, hollow sex fantasy “characters” real brings home how truly horrible they are. The whole sexist narrative of them is challenged by Lena’s experience, her being shaped and moulded against her will – how she values both Nidhi and Isaac because it’s the only way she has any kind of choice or opinion of her own; to have 2 competing views. The portrayal takes this trope and throws into harsh relief just how creepy and wrong it is; her whole character is a challenge to all the sex nymphs mindlessly drawn to beefy protagonists over the genre.

The racial inclusion in this book is more prevalent than in the last, which is a step up. Nidhi is a character from the very beginning – though she isn’t as central as Lena and Isaac. There are scenes when we have large numbers of Libriomancers gathering for battle some of them are POC. Of course, the followers of Bi Sheng are Asian and far more than just villains – even potential future allies. Jeneta, a brilliant 14 year old Libriomancer, inspired by poetry who has discovered a whole new way of using Libriomancy, is Black and, while not central now, seems likely to be in the next book. I think Nidhi is the closest we have to any central POC in all and this is primarily Lena and Isaac’s story.

Lena is bisexual and Nidhi is either bisexual or a lesbian. Again, we have a focus on Isaac but it is definitely not pushing Nidhi into the background. There’s a lot of balance in their relationship and some wonderful growth as they learn and grow into their three-way relationship. While Lena’s attraction has uncomfortable edges of woo-woo to it along with all of her sexuality which always makes it problematic – Nidhi does not and is legitimately, non woo-wooy – attracted to Lena. Lena even made a point of saying how she can use her lust magic on most men and some women, acknowledging that her power doesn’t cross sexual orientation which is excellently reinforcing and breaks a lot of the tropes we see with magical seduction.

This is one of those books that, when it’s over, you look at it with deep disappointment and slight shock – what do you mean it’s over?! I haven’t finished basking in the awesome yet!?! Give me mooore! It was an epic act of willpower that made me not flick right back to page one and start all over again. Exciting, funny, geeky with an excellent world and some awesome characters, good, evil, flaming spiders and lots of epic. Buy it, read it, love it. Anyone who loves books, especially anyone who loves speculative fiction, will love this series.