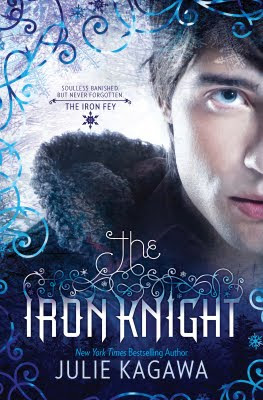 Ash made a promise to Meghan – he would find a way to be with her in the Iron Realm, a realm poisonous to the fae. Even if that means becoming human.

Which calls for a quest – first to find Grimalkin because he normally knows, well, everything and from there a quest to make Ash mortal. To find him a human soul. All the while accompanied with Puck for his own brand of randomness – and the deep underlying pain that still strains their broken friendship.

This book, as can be guessed by the title, focuses on Ash. Hmmmm…

Ok I’m going to confess a “your mileage may vary” moment, but I don’t like Ash. I don’t like the whole centuries old immortal falling head over heels for a teenager after spending 5 minutes with them trope. I don’t like the idea of a centuries old immortal deciding to give up his life, his allegiances – just about everything that defines him – to dedicate his whole being to a teenager he’s known for a month, if that. The whole concept of Ash from book 1 has annoyed me.

Add to this that Ash isn’t exactly romantic and glamorous in his angst. He sulks, he pouts, he becomes passive aggressive and snarky and doles out the silent treatment. He’s moody and just a little petulant; I suspect he looks like a teenager, but he’s supposed to be several centuries old, we would hope for a little more maturity.

And this book feels like a grand show case for the angst and every encounter feels like another way to develop more angst into the tale. Puck comes along with him – allowing lots of angst about Ariella being dead, lots of angst about Puck loving Meghan and even a side order of angst from Puck about how he never took his chance to be with Meghan. (And, side point again – but uckies, ew, creepy! Puck has been watching Megahn since she was a baby. He watched her all her life until the age of 16. The idea that he missed the chance to make his feelings known is just intensely, skin crawly creepy here. She’s 16! He knew her as a baby! Get away from her you creepy creepy person you).

And the seer –  is she there for any other purpose than to pile on more angst and a love triangle plot? To have Ash doubt about whether he wants Meghan and to wring his hands for more moping and angst? We even have a random encounter with some Thornguards which seems to exist only to bring home to Ash how impossible it is for him, a Winter Fey, to exist in the Iron Realm for yet more angst about the hopelessness of it all.

Even the ending is positively saturated with angst

Frankly, I have little time for it and had a hard time dredging through the endless moping. The only redemption came, for me, from the side characters. Puck is always fun – wild and random and light and carefree and silly – but always, lurking under there, an edge. He seems so reckless and silly and playful but underneath there’s always a suggestion of how dangerous he can be, of how his pranks and japes can easily turn into malice and danger if he is sufficiently provoked. I like Puck, he’s a fascinating character and worthy of more time in his own right – once he’s away from Ash and his eternal angst field that can even make Puck start moping.

I liked Wolf – though I think he lost some of his awe and the sense of sheer power to him that we got from Winter’s Passage, he was still an excellent edition and probably a core of the true nature of what the fae are. Of course, the show was stolen by Grimalkin who is eternally awesome with some of the best lines, constant, sheer brilliance and some excellent snark with Wolf (who is an inferior species being a dog) and added, perfect cat phrases like him not understanding why having not a shred of loyalty is a BAD thing!? Grimalkin is awesome, he adds a vein of gold to this book and is one of the main reasons I kept on reading.

The Seer whose name I am trying not to reveal was… not a good addition. While I liked her portrayal as this excellent, awesome master manipulator using her seer powers to set everything up for the greater good, she’s still a figure who exists to sacrifice herself for other people’s stories. Her whole presence in this book is to be a mystical, self-sacrificing guide (which Grimalkin does better) and to help add more angst to Ash’s already overloaded moping bank and ultimately lay down for the greater good. This is further a problem in that she is the only female character in the book – certainly to any appreciable degree.

Which compounds with the fact that this is yet another book without a single minority of any kind. That’s 4 books and 2 novellas, it’s not a good record.

The other positive element of the book was the world building development and underscoring. I’ve always loved the world created in this series and I think this book did a great job of adding more of the weird and wonderful. By bringing in the Deep Wyld, the River of Dreams and all the oddness that comes with it, it truly underscored the oddness, the weirdness, the alienness of the fae and the beings and powers that make up faerie.

But it also developed so many of the concepts that had already been touched upon. Like how fae do not have souls and are just the creation of human dreams and imagination – which is why it’s vital to the fae that they be remembered by humanity. We see fae fading to nothingness, unable to remember their names after humans have lost them and, conversely, we see Wolf and Puck as both empowered and long lived because they’re such iconic figures who have been remembered over and over. Wolf even joins the group in part because the adventure will be a story that is told ensuring he continues to be remembered.

There was some wonderful development on what names and promises mean – and the actual consequences of fae breaking a promise. It underscores just how much promises are inviolate to the fae or they lose their entire sense of self – or even their existence. The world building was really well done and keeps me invested in this series.

The story itself was decent. It was linear, we had the classic magical infallible guards and the group following them and overcoming whatever monsters or traps were along the way. It was pretty predictable, we knew they’d get there in the end and none of the encounters were particularly novel to make the journey particularly new or different – though it did have many opportunities to show off the world (and Ash’s eternal angst). It wasn’t badly written and was decently well paced – though still contained a lot of recapping that felt pretty unnecessary – especially since the recapping feels like vast pieces of text copied and pasted from previous books. It was a pretty good dungeon crawl, an adventure with gribbles and fighting that was well presented and decently interesting and exciting – but I can’t say it was anything special beyond that

In all, I can’t say I was particularly disappointed in this book per se because I knew what I was getting into when I realised it was a book all about Ash the Mopey. But it was a story without any real twists, just a series of encounters and fights pasted together, heavily intertwined with lots and lots of angst. We have the continued erasure of minorities and don’t even have the epic consequences that permeated the other books so well. It closes the series and tidies up loose ends but I can’t say it thrilled me.