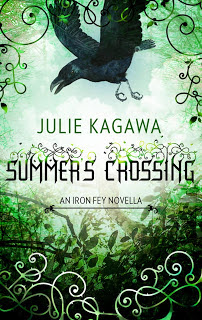 Ash has made an oath, he will find a way to be with Meghan. But before then the Leanansidhe would like to remind him that he owes her a favour. And a fae can never go back on his word.

A story with lots of Puck’s point of view! Excellent!

I like Puck. I like his joy, I like his fun. I like his effortless competence. I like the fact he breezes through life secure in the knowledge that he can usually get himself out of whatever mess he gets into. I like his irreverence. I like his willingness to try anything and truly embrace his life and immortality. And I like that, under it all, there’s a hard edged core that shows you just how dangerous the Trickster can be

So a book following Puck’s POV primarily? Count me in.

And then Ash comes along – noooooooooo! Ash being Ash, he drags Puck into his angst aura and the moping begins.  In particular Puck’s unrequited love for Meghan. I hate this – I hate this when Ash is moping but even more so when it’s Puck. It strikes me as the worst character conversion since Marvel turned Loki from a source of utter chaos to Angsty McDaddyissues.

I’ve said it before and I’ll say it again, I do not like Puck’s crushing on Meghan. I find the idea of a centuries old being and a teenager creepy at the best of times, but add in that Puck has known her since she was a baby and it goes well beyond merely creepy. I don’t like it, don’t like it at all.

So there’s some angst and some moping and Puck wondering if he could let Ash die just so that he can then make moves on the grieving Meghan which turns the moping unrequitedness into a special kind of arseholery that leaves me yelling “whyyy Puck? You and Grimalkin are the only characters in this book that doesn’t make me want to slap them!”

I also hate that Titania is dragged in again. Now I would love the idea of the tumultuous and volatile Summer monarchs sparring passionately, playing devious little games against each other and generally being capricious, malicious and, well, fae. That would really work for me. I also like the idea that the Seelie court is not the source of light and goodness and even they will snatch mortals for their own ends.

But I don’t think either was really pulled off. While Summer can be intimidating, ultimately Titania is the source of most the threat. And while Oberon and Titania may spar, Titania is the one presented as petty and flighty and spiteful. I really do hate how Titania has been portrayed in this series.


At least we had one of the few POC in the series in this book – but only a mortal Indian child viewed as a prize between the competing queens.

The story itself, once we get past all this, is a fun little novella – a glance into the life of the random actions of Puck and Ash being his normal self. Yet… I don’t think it particularly adds something. I know one of the unwritten rules of novellas is that they shouldn’t be required reading for the overall series, but I generally hope they’d add something. Some sense of why  it’s there – some character development or world building or expanding a side issue. I don’t think we really get that in this book.

It’s a fun little novella and it carries all the advantages and flaws of the Iron Fey series, but it’s also pretty missable