Gossamer: A Story of Love and Tragedy by Lee Thompson 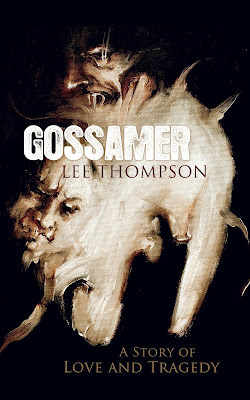 Dorothy has had a long, magical life. Fleeing persecution, death and betrayal, she and her aunt sought their own sanctuary, a place of their own with their own people sheltered by magic. But even that was a tragedy, leaving Dorothy alone with her immortal followers – followers who worshipped her and adored her and the gifts she brought, but couldn’t fill the hollow within herself.

Until one man came who brought love – and brought tragedy to her people. Now she must resort to luring in others to her lethal trap to try and save some of her people from the monster she invited among them. Which is where Brooke, Natalie and Angel arrive in this isolate sanctuary and find themselves drawn into the web.

This book opened awesomely. We had Dorothy and her story, her history. We had her power, her childhood, the persecution and trials she faced. We had her developing her power, we had her aunt and her own awesomeness. We had them challenging the norms and motives and evil prejudices of the era in which they lived. We had them escaping it while condemning it, we had them setting up their own community, and their lives there. The magic, the carousel, the heartbreaking split between them.

It was fascinating. It was powerful. It was meaningful. It was evocative and poetic and painful and beautiful. I was hooked, this book looked awesome. I couldn’t wait for more information about Dorothy, more of Dorothy’s story, her struggle to ensure her community survived and thrived, the challenges hinted at with the man and his hunger, the oddness unveiled with the boy and his spiders. I knew I was going to love this book.

That was Part One of the book. Truly excellent characters, an amazing story, a fascinating world, a great concept and a beautiful, emotive, poetic style that was a sheer joy to read.

Then we reached Part Two.

Dorothy became an odd, plotting, side character trying to run some kind of convoluted plan that I never really understood but involved stuff happening. Instead we focused on Brooke, her daughter Natalie and her new husband Angel.  A family of three arriving in town to wander around for convoluted reasons and promptly info-dump the hell out of everything. Page after page after page after page I was given more information about Brooke and Angel’s childhoods than I know about my own parents’. Brooke’s first marriage was covered including why she dumped Natalie’s father and why she is so protective and controlling and various others things covered. At length. Angel’s father, stepfather and how that contributed to various issues in his own life and romantic life. His love of carousels was described in eyeball-desiccating detail. We have descriptions of their jobs, why they do their jobs, what they think of their jobs. I’m scrolling through my tablet notes as I write this review and it’s just dozens of highlights with the notes “long winded” “unnecessary information” repeated over and over again. I can track my growing frustration as the notes change to “rambling” “yet more rambling” “why are you telling me this?”, “am I bothered?” and “ye gods who cares?!”

All of this is written in the most rambly, overdescriptive, style that is supposed to be ominous or evocative but fails utterly because it is so convoluted and so constantly interrupted with the massive info-dumps. In trying to make me care about these three people, the author forces a huge amount of information about them, shoe-horned in without rhyme or reason and in the driest, dullest style possible. Unlike Dorothy who had me invested as her story was SHOWN in dramatic, poetic, amazing detail, this dull recounting forced in every time a character stood still for two seconds didn’t just leave me not caring about these characters, it left me actively hoping something would kill and eat them so we could move onto something more interesting. The endless description is so clunky and unnatural that they feel LESS like actual people than if the info had been left out.

There’s an added problem that Part One, in all its glory, pretty much gives us a strong idea of exactly what happened to the town, if not in great detail. So the ominous mystery of the bad stuff about to happen to the family of three never really develops because I already know the answer. The great revelations have already been revealed which, added to the fact I really really do not care what happens to any of them, leaves the whole book with a decided lack of tension.

And there’s how it’s written – this book is written in the first person from Dorothy’s point of view; while at the same time it’s an all knowing narrator. So Dorothy will describe Natalie looking at her as “Natalie looked at me” and then have a full detailed (incredibly, unnecessarily detailed) description of what Natalie was thinking, despite us not seeing the scene from Natalie’s POV. It’s a really jarring tool that doesn’t help me get into the book at all and it made the constant description of every little thought and memory seem even more jarring and unnecessary than a classic all knowing narrator would have.

And I have no freaking clue what happened to Angel, between obsessing over fairground rides and randomly stripping naked I just gave up trying to understand. There was a lot of random inserts that just happened – like Natalie and Brooke suddenly having hallucinations and disappearing doors – it didn’t do anything. I expect it was to add to the random build up of tension, but it made no sense for Dorothy (and there’s no-one else who could have created these illusions) to do it. It’s just THERE as padding for more angst/fear/tension attempt.

The only reason I didn’t DNF this book is vaguely clinging to the hope it would return to its former glory. It didn’t. The only reason this book didn’t get 0.5 Fangs is because Part One is truly excellent with lots of commentary on patriarchy, history, freedom, some truly excellently emotional scenes and some genuine awesomeness.

Part Two was just awful to me. Rambly, clumsily written, full of info-dumps, a pre-revealed mystery, characters who were not remotely compelling or interesting, a clunky POV, unnecessary scenes and a lot of bogged down description with stalled, broken pacing. We had some attempts at strength by presenting Brooke as capable, intelligent, determined through her history and actions – but it’s so clumsily written I can’t remotely get behind her. Part Two of the book is just written in a style that grates on me, it’s too full, too packed, too bloated with no connection to the characters from me.