The Walking Dead Volume 17: Something to Fear 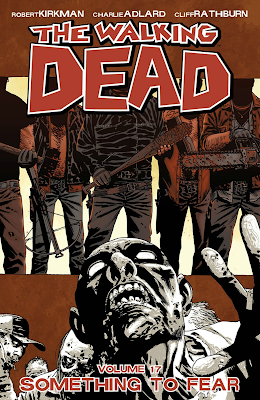 This volume we see Rick’s optimism and positivity about the new nation he plans to lead reach greater heights. He’s even talking about ending the zombie apocalypse in 5 years. He has so little fear of the zombies now that he nearly pushed through a wall of them chasing Negan’s group. His confidence and optimism has reached a level of arrogance.

And this is especially true when we see his consideration of Negan’s gang. The idea of Negan’s Saviours being an actual threat never occurs to Rick. He offers to destroy them without knowing what he’s gone up against (much to Andrea and Michonne’s consternation). The idea that the Saviours could be as dangerous or more so than his group is beyond him. So extreme is this cockiness that it feels almost unrealistic, especially from the man who lost a hand, a wife and a daughter to the Governor (in fact, he was still talking to Lori on the phone until recently). This level of confidence - bolstered after seeing his combat superiority compared to the Alexandrians and the Hilltoppers - seems to have reached not-quite-believable heights. I can see him being confident and invested in his ideal future - but he has erased one of the more defining elements of his - and other character’s pasts - to come to this conclusion.

This shaky story and not-quite-justifiable cockiness seems to be forcing a theme - of Rick’s harsh crashing to reality. But the theme does feel forced - because we can’t really believe that Rick would become so naive in the first place.

To add to the forced feel of this volume, that cockiness is used to justify some dubious decisions - like Rick deciding to turn to Hilltop for help, despite having seen how fearful and inept Hilltop has been in the past. But Rick making that decision was needed to set up the ambush (which he, somehow, never predicted) and for the death of Glenn. Just as Abraham and Eugene going out alone was needed despite them knowing of the Saviour threat to lead to the death of Abraham.

The loss of Glenn is a deeply sad moment - and part of the Walking Dead’s anyone-can-die ethos - but it has left the series without any Asian characters.

The two major female characters in life at present are Michonne and Andrea. He has an equally long relationship with both women. Andrea has become his lover and Michonne supposedly his trusted friend but despite assertions that he values these women, his actions clearly show otherwise. Andrea makes it clear at the very beginning of this that she is not as hopeful about their interaction with the Hilltop as Rick is but he is blinded by his ambition Rick keeps singing rainbows and lollipops in complete denial of the world they live in.

When they meet up against Negan’s group, Rick simply orders Andrea into action by saying her name. This is exactly how Rick has treated Michonne for quite some time. At that point she ceased being a person and became a weapon for him to use at will. Rick trusts Andrea to act on his command and even stay behind and guard Alexandria in his absence, but when it comes to his plans on how to deal with Negan, Rick does not feel that he has to share anything with Andrea. He instead brings in Jesus claiming that he is protecting Alexandria and this is after Andrea has proven herself to be at the very least as capable as Rick. If Rick truly recognised Andrea as an equal or even respected her skill set this is not a decision he would have made. To lie to Andrea as a way of supposedly protecting her actually infantalised her.

When Rick decides to seek peace with Negan, he is worried that Michonne will take off and start a one woman military campaign, that she couldn’t possibly accept the peace. This is very reminiscent of the Angry Black Woman trope, that Michonne, the Black woman, could not possibly accept a peaceful solution. It’s noteworthy he doesn’t feel the same need to restrain Andrea.

Michonne turns round to him and says she doesn’t actually like to fight. She fights because she needs to to survive - she isn’t always looking for violence. In fact, she calls out one of the ongoing problems we have with Michonne’s characterisation - that she is like an attack dog on Rick’s leash. To have Rick worry about her violence when he has been the one both directing and encouraging that violence is exasperating to say the least.

But, more than that, why is Michonne having to say this? How long has Rick known Michonne? How long have they fought side by side? Why has it taken so long for Rick to realise this basic element of Michonne’s personality? Why did Rick even fear Michonne would go off on a commando raid? Similarly, while it’s nice to see Rick finally thanking and acknowledging Michonne - it IS finally after a ridiculous number of episodes taking her for granted

In the eternal “we’ve all got to feel guilty” angst padding this volume, Michonne even considers whether she “forced” the Governor into attacking by what she did to him after he raped her. Which is not only ridiculous for having Michonne accept any guilt over the matter, but also denies that part of the reason the Governor raped her and cut off Rick’s hand was to force them to disclose the Prison’s location - he was always aimed at them.

We also aren’t a big fan of how Abraham and Eugene talked about Rosita. There was very little consideration of the fact that she just isn’t interested in Eugene. It doesn’t matter how little choice there is or how nice he is - she isn’t interested.

In all, this volume is probably the weakest one we’ve read to date. Negan feels a lot like the Governor #2. The pacing was slow and both the theme and plot feel a little forced and convoluted. For the first time, we fear The Walking Dead comics may be running out of ideas. We have previously discussed Issue 100 before in more detail.