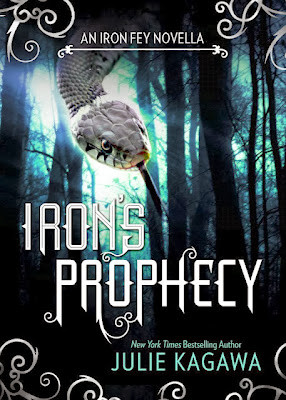 Meghan is the Iron Queen, Ash is her consort and everything couldn’t be better. Being Queen is hard work but Meghan rises to the occasion – even making notes to ensure Mab remembers where their borders lie. Ash still has the power to ensure his old associates at the Winter Court respect his ice and his blade. And there’s a baby on the way – things couldn’t be better

Except for an oracle with a dire prophecy concerning that child. A prophecy that requires them to delve into the outer reaches of the Nevern

This is a nice, bridging novella. I think it was just what was needed to mark the transition of the Iron Fey to the next set of stories no doubt set a considerable time in the future from where they are now.

Meghan and Ash both have their happily ever after. Meghan is settling in as Queen, Ash is finding his place as consort. They both seem more than capable and Meghan is even willing to stare down Mab in her own hall – she’s come a long way, she isn’t a simple mortal girl any more.

We even have some wonderful moments of that – like Ash trying to play the protector and Meghan (nicely) making it abundantly clear, SHE is the super powerful faerie monarch, thank you very much, she doesn’t need to hang around at the back like a delicate little flower waiting for the menfolk to save her. She can not only save herself, but has done so – and can save her menfolk and her kingdom as well for that matter.

And Ash is, for once, wonderfully free of the angst that makes me want to bury him somewhere. Of course, he has no reason to angst. He has some natural wistful thoughts about the court and family he left behind, but compared to the epic, book consuming moping that characterised his every breath to date, it’s a blessed relief. Ash is now happy (I know, I nearly fainted) and even has sufficient power that he isn’t angsting about that either – it’s a wonderful addition of closure to their story.

Which I think this book is, in part, about. Meghan is queen – and we see that she is very powerful and capable. The message is clear – we aren’t going to get books of Meghan struggling to hold the throne because it’s firmly in her possession. Ash is happy and her consort – and we see he both is happy and capable in the role. We’re not going to get books of Ash moping through the halls because he’s mortal and just not good enough. Grimalkin and Robin are very much clearly written as very much themselves, no new developments and things to dent their awesomeness.


The story of these four feels written and finished – but we then have the prophecy. A prophecy about Meghan’s unborn child and her brother, Ethan and a whole lot of foreshadowing and ominous rumbling. If the story of Meghan, Ash, Puck and Grim is written, then the doors have been opened for the story of Meghan’s child and brother in the future.

As, I said, a bridge book. And an excellently positioned one at that