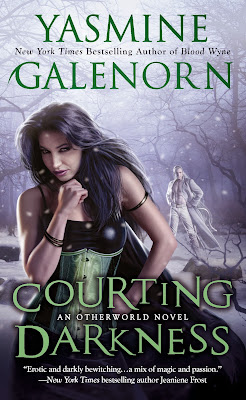 Hyto, Smoky’s ancient and lethal draconic father, has finished threatening from afar and is finally making good on his threat to make Camille suffer – blaming her for how much face he lost in the Draconic world.

Having a powerful White Dragon hunting you is a terrifying situation – but with friends falling into portals and the Elder Fae lurking around and running amok, Camille can hardly hide.

But nor can she escape the grasp – and tortures – of her ancient, sadistic father-in-law.

Oops, I spoke too soon.

Ok, a little unfair, but I can’t help but be a little disappointed in this book – primarily because the series were getting better. Better written, more focused world building and characterisation, more pointful storylines and at least some of the bloat corralled – or if there was going to be bloat at least it would be USEFUL bloat. So did Blood Wyne advance the main story? No. But it expanded relevant world building – the vampires – and developed Menolly’s character and relationships (and introduced new plot lines that weren’t all that essential but the Otherworld series loves its side tracks). So bloat – but bloat with a purpose.

The main storyline centres around Camille and Smoky’s evil father. Already that’s going to be shaky because Smoky’s evil father has been a pointless background looming adding nothing to the whole series for a very long time – it was the very definition of a storyline that could have been cut. It has added nothing in 9 books except angst and it adds nothing now. It wasn’t even used as an avenue to develop Smoky’s character to explore the dragons’ world building. It did nothing to advance the world building or the meta plot

Nor did it develop Camille’s character – unless we consider additional trauma to be a necessary expansion of her character (I don’t). We don’t see her develop any real connection to Aeval yet, despite joining the Unseelie court in a week (the whole book covers about that long). There’s nothing really from her relationship with the Moon Mother, her magic – or, well, anything.

About the only change to anything when this book finishes is Camille has some more scars and trauma and they pick up a grateful refugee to act as a maid.

The main plot line is pointless.

The secondary plot lines? Chase goes on a magical mystery tour of the Astral in which we have ELDER FAE (scary music) who are there… to be Elder Fae. I mean the concept was introduced last book and we’re going to just have them scattered about this book for… reasons. It kind of ruined the whole sense of the Elder Fae as a major super-rare terrifying unique forces around to have so many of them scattered around. Herne drops in to, I dunno, have massive genitals I think, because I have no clue why else he was there. The whole storyline felt like a clumsy addition – maybe it should have been broken off as a short story or just ignored as completely and utterly unnecessary.

Throw in some more randomness – let’s have Sephra drop in to top up Camille’s daddy issues because how else will we deal without epic catastrophic angst? Seriously he served no other purpose. He literally dropped in to repeat how much he’s disowning Camille.

But other than the story not adding any meta, was it any good? Not really. There wasn’t much story there (lots of distraction padded up the word count). They learn Hyto is around. They spend some time being scared of him, we have the side plots, some brief drama over the Vanzir and Camille badness from the last book and then Camille falls into Hyto’s hands and we get page after page of torture, humiliation, rape. It was an unpleasant read and it was, as I’ve said before, an unnecessary one and I hate having rape in a story anyway but when it doesn’t even have a story purpose it just adds to the badness. Especially since this follows right after the Vanzir/Camille magical-I-just-had-to-it’s-not-my-fault-rape and the fact that Vanzir, Menolly and Trillian have all been raped already in the books. It did not need more rape. I really did not, even if the big bad does end up with lots of comeuppance

And I have to say the writing took a big step back as well. The recapping in this book is ridiculously excessive. But not just the recapping – there’s also a lot of repetitiveness in both the recapping and the plot as well and a lot of pointless, long rambly asides – like Camille going to a meeting with the Unseelie Queen (who was virtually a long rambly aside in herself) decides to have a long reminiscent musing about her mother. Just these interludes of ramble that, again, add nothing to the plot or world.  Even the story itself, how it progresses from stage to stage, is really convoluted and drawn out. They couldn’t just learn Hyto was in the area – they had to get a clandestine message, then they had to face down a demon in a big show down in the Wayfarer and turn him into a poodle (don’t ask)… all to learn “Hyto’s here.” A text message would have done.

It’s a pattern that continues throughout the book and harks back to the worst of the over-written bloat of the past.

In all, this book is bloated, it’s overwritten, it rambles along without getting anywhere, it’s the 10th book in a series without advancing anything substantive in that series and it adds some more gratuitous torture and rape to a series that already has more than its fair share of torture and rape.