Vampire Diaries, Season 5, Episode 4: For Whom the Bell Tolls 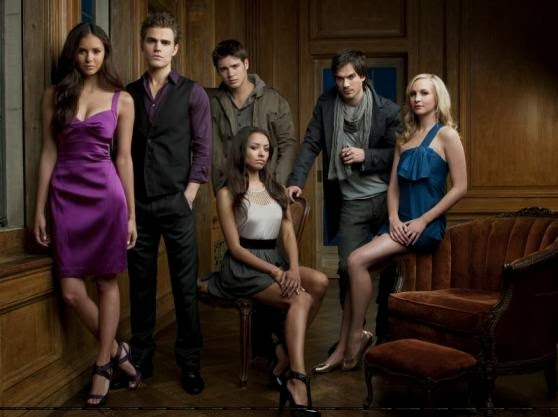 Damon and Stefan are on a road trip – Stefan knows lots of day to day things – but he’s been reading his journals (full of extra whining angst – over a century of extra whining angst, good gods the tedium!) and none of it is ringing any bells (though if I were Stefan’s subconscious, I’d deny all knowledge as well). Oh and Stefan thinks he’s the fun brother and Damon the safe brother

Well, maybe – I’ve said before that Stefan has a magical aura of mustiness, able to turn even the sexiest, funnest, most amoral vampire into a dull, angsting , moping Louis.

Damon deliberately wrecks the car to prove a point. Stefan accepts that no, he is not the fun brother.

Elena is concerned about sending Stefan off with Damon since they may do Bad Things and shares her worry with Caroline who is pretty sure they will do Bad Things (and then they can all laugh about it later. Tee-hee a serial killer!). But time to infodump what Vampire Barbie has been up to – she’s trying to get close to Creepy Professor Maxfield who knows far too much about vampires, as well as semi-dating Jessie (he-who-is-going-to-be-snack-food) and she’s bringing him to a special Mystic Falls rememberance graveyard ceremony/party/fawning founder worship

Really? She goes to college and she’s STILL going to these Mystical fall events? And how many events can Mystic Falls HAVE?! They always seem to be getting ready for some massive, town-wide celebration (they just had one where the mayor died!), this one called Remembrance Day – because you remember dead folks.

Stefan and Damon are in a bar, already drinking to the town’s Remembrance day celebrations while talking about how morbid it is – and Stefan zones in on the waitress. He’s convinced he’s a vampire – but Stefan also has a problem with drinking live blood. Stefan puts forward the idea that his whole ripper-serial-killer-thing may be because of his remembered trauma and guilt – and since he doesn’t remember he may be safe now! I agree with Damon that testing “am I still a serial killer?” is probably not a great idea. Elena, realising a scene has gone on for several minutes without her, turns up and Stefan forgets her name (*snerk*). She’s displeased with Damon for not making introducing her the priority of his 200 year recap.

To Bonnie and Jeremy where Bonnie’s new source of entertainment is watching Jeremy work out (really Bonnie, surely he showers? This must be much much more entertaining) and telling him every girl on the other side thanks him for it (there’s an image for you now Jeremy – all the invisible ghosties be watching you).  Alas, light jokes cannot stay because Jeremy has been dodging all their friends for Bonnie – because they still don’t know she’s dead and they’re all waiting for her to show and fix Stefan’s memory. Because, as Jeremy puts it in the most shamelessly lampshaded moment on Vampire Diaries, ever “she helps”.

Speaking of, Matt calls Jeremy to ask for advice about him losing time and apparently going wandering, getting muddy and picking up weapons. Jeremy naturally thinks it’s the serial-killer Gilbert ring but Matt denies it – he blames (rightly albeit with little reason for the logical leap). Clearly he needs Bonnie’s help and why can’t Jeremy summon Bonnie and make her fix things!?

On to Elena with Damon and she calls Bonnie as well – because she needs someone to fix Stefan! And Damon has already tried 10 times or more.

Meanwhile Stefan is hunting the waitress and assuring her he won’t hurt her and isn’t a serial killer in his perfect “I’M A TOTAL SERIAL KILLER” creepy voice. Damon rushes in to drag him away just in time, Stefan breathing heavily and having trouble. From there it’s to the Salvatore family crypt which has a lack of tasty servers to nosh on. It does have several dead Salvatores (Damon fills in the gaps: father killed by Stefan, Uncle Zach killed by Damon. Bright side - mother died of consumption). Damon goes to meet Jeremy after Jeremy texts him for a 1-on-1 meeting leaving Elena to compete with Stefan for most tragic family prize (she wins) and Stefan to flirt.

This leads to them going to the school and re-enacting the first time they met to try and fire some memories before they have to leave because someone’s cut himself and Stefan’s control frays. Elena gets to pull some of the “look cool vampire tricks!” on Stefan and Stefan clues in that they dated once – but Elena assures him she wasn’t put off by him ripping off heads (alas, no, she wasn’t) nor was she bored by him (I was) but that it all changed when she became a vampire.

They go to where she died, there’s more touching memories of how perfect a boyfriend he was and Amnesia!Stefan is in full blown crush mode and how being around her controls the hunger. Anyone in the audience not see this coming? They nearly kiss and Elena reveals she’s with Damon. Stefan is surprised – and then says the hunger returns and disappears.

On to Caroline and Jessie in the cemetery where everyone is ringing bells and partaking in the eternal Mystical Falls celebrations. Caroline proves that she’s very smart with her revising with Jessie, adds the death knell of her relationship with Tyler and confirms her attraction to Jessie-who-is-so-going-to-be-dead-by-the-end-of-the-season.  They kiss.

On to Jeremy with his meeting with Damon and Jeremy begins to spill to big secret about Bonnie – while Bonnie begs him not to. Damon doesn’t want it to be true because if it is everything in Elena’s life goes to crap (in ELENA’S life?!). Jeremy tells Damon that Bonnie’s dead even while she tells him not to.

Mat interlude! Mat checks one of the cameras he has lying around to see what he did to cause a cut on his hand and he gets a little message from Gregor, his passenger. He’s told to protect the knife, that someone will come looking for it. If he doesn’t, Gregor will slit his/their throat.

Elena calls Damon to let him know that Stefan’s gone AWOL and there’s an entire graveyard full of celebrating townsfolk to snack on. Stefan’s among them and runs into Caroline and promptly informs her that he’s 10 seconds away from killing and eating everyone – including Jessie who has a papercut. Caroline compels Jessie to leave and hide and Stefan evades her when she tries to take him to get some blood bags.

Stefan fines Jessie and bites him (Vampire Diaries – where Black people are snack food) – and stops. And monologues in a rather villainous fashion (self-control gained by evil monologuing?) while Jessie begs him to let him go. Stefan’s all bitter and angry because being the good one and not murdering everyone (well, much) has not resulted in everyone giving him treats and him getting Elena. How can he even feel bitter about his brother “stealing his girlfriend” when he can’t even remember either of them?! Stefan lunges in to attack again.

Caroline rushes in and tears Stefan off Jessie and tells Stefan he’s better than this! Stefan leaves and Caroline feeds Jessie her blood – he’s actually going to live! Really? Wow, didn’t see that coming. He’s still so dead by the end of the season. Or possibly evil. Then dead.

Elena and Damon find Stefan back home, burning his journals. He flounces from the room because he can’t trust either of them and doesn’t want anything to do with them because waaaah he doesn’t get the girl he wants who he can’t even remember but Elena is just so damn special, waaaaaah. Elena again wonders where Bonnie is because they need her magical witchy problem solving power and Bonnie ALWAYS comes when Elena calls. Damon tells her Bonnie is dead.

Caroline finds Stefan pouting in the Salvatore crypt and someone’s filled her in on Bonnie’s death as well. Caroline’s sad that Bonnie’s dead and Tyler left her and she was just so used to them always being there – how can she just move on? (By grieving. For a few minutes. You don’t actually try to “move on” the first day you’re told a friend died). But it’s ok Caroline, you have Stefan to lean on.

Elena is in bits because she can’t keep doing this – Stefan gone and Bonnie dead she just can’t handle it – with ghostly Bonnie watching through the window.

Matt, Jeremy, Damon, Elena and Caroline have a ceremony for Bonnie at a tree stump in the woods. Bonnie appears next to Jeremy and tells them that it’s ok – because they (the weeping Caroline and Elena) need this – and (thankfully) adds that she needs it as well. She then tells him what to say to comfort Elena and Caroline and with personal messages for each of them. And Tyler arrives – Caroline runs to him and hugs him.

Bonnie says “this is good. This is all I wanted”

We close with Jessie being tested by Dr. Maxwell asking questions about Caroline. Maxwell tells Jessie that he has vampire blood in his system – step 1 to creating a vampire. He then injects him with something lethal – step 2.

Ok so he did die – but will come back. I wager he will die again (evil then die I think) especially with Tyler back.

Bonnie “helps”. I laughed out loud when Jeremy said that line. Bonnie serves. This has been her role since the very beginning of season 1. She has served.  And now her death is inconveniencing people because THEY NEED HER SERVICE.

And all these people who need Bonnie – Stefan, Damon, Matt – sure they don’t know she’s dead but they DO know her father was just brutally murdered. So the outraged “she can’t pick up a phone and sort out MY problems with her pesky living her own life and grieving?!” is still nauseating.

Everyone is literally waiting for Bonnie to swoop in and serve – with little or no acknowledgement of her issues. And Damon thinks Bonnie’s being dead will make her life crap? And Jeremy can’t stand keeping the secret because it’s hurting so many people? WHAT ABOUT BONNIE? And that applies to all the grief scenes – the fact that Caroline and Elena both linked Bonnie’s deaths with people who had just left (or become amnesiacs) made it all less “Bonnie was so special to me and wonderful and a great friend” and more “woe is me! How will I cope! Woe!” There’s very little of the person they’re grieving for in their grief.

If Bonnie does return to the living in this or a future season it will be entirely because the cast need Bonnie to fix all the problems with her eternally servile woo-woo.  Which makes her “this is all I ever wanted” less a beautiful statement of love for her friends and more of her eternal service.

I’m also not loving the idea that being around Elena controls Stefan’s hunger. Is this supposed to be romantic? Their love is so strong and pure that it tames his evil serial-killerness (which never bothers Elena anyway)? Because to me it feels like Elena is being blackmailed with the safety of others. If, without Elena, Stefan becomes a serial killer then there is a threat element to keeping them together.

CW – I’m watching Beauty and the Beast with its amnesia plot line and now Vampire Diaries has started one? Are you sharing writers or just getting lazy?