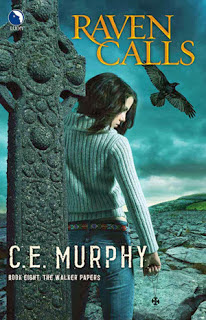 Joanne has returned to Ireland, at very short notice (but with a very awesome coat) to try and find a cure for the werewolf bite. Her decisions is further reinforced by her magic virtually dragging her to Tara.

But when there, and meeting up with Gary, she is plunged into her magic and into the past, to the old Aos Si rulers of Ireland, finding some surprising revelations about her ancestry and what that means and beginning to see the full scope of the Master’s powers and plans.

The magic gives her one last chance to see her mother – and to save her – and to close many of the damaged time loops that have been formed over the years of battling the Master. But the time when she confronts the Master directly is approaching…

Time travel. Lots of time travel. With time loops and paradoxes and all kinds of shenanigans.

This is a problem. It’s very easy to become lost and confused with time travel. The roving tenses, the shifting scene, the general blending of time and place can be very hard to follow. It has to be very carefully done to make sure the reader can follow without being completely, hopelessly lost.

Aaaaand, this is the Walker Papers which, among their many good points, also has a habit of leaving me completely, hopelessly lost even without time travel. The imagery, the description of power, the different realms – it all can be one confusing mess that has left me bemused and confused far too often.

So, The Walker Papers + time travel means we’re probably going to have a problem. And we did – it wasn’t clear. I had to stop and go back, I had to double check, I had to recap  and sometimes I just had to run with it and file it under “stuff happened, I don’t need to know what” and keep moving.

There’s also a lot of unexplained references to past books. Now I appreciate the lack of tiresome recapping, I do; I’ve made it clear before that I don’t like recaps. But even I had to stop and think about some of the things referenced.

So, it wasn’t an easy read.

On top of that, Joanne felt wrong to me – specifically, her dialogue felt… strained. I love Joanne, I love her snark, I love her exasperation, I love her irreverence, I love her trying to understand things and being frustrated with all this supernatural stuff and being frustrated with herself over the supernatural stuff. I love the fact that frustration plus her early resistance to anything resembling woo-woo left her with zero urges to play to various gods and revered figures egos. I love her snark over grandiose, ornate magical talk. And I love her glee when she remembers or knows something in her limited occult lore – even if she is running around and showing her blatant 101 knowledge in front of the experts. I love her habit of babbling when nervous.

And I loved it in this book – but at times it was a little forced. Partly because she has grown beyond a lot of this and partly because it was taken to ridiculous extremes – there were times when Joanne came across as childish, bad tempered and just plain mean, snotty and nasty; which has never been her before.

So there we have the negatives, and I won’t downplay them, they are problems. But there’s a lot of good here as well.

I loved meeting up with Gary again after so long without him – and I loved the way he was there, he supported Joanne, he was a hero in his own right yet never once taking centre stage from Joanne.

I loved Catriona – I hope she will be an addition in the future and it adds that not only is Joanne not the only magic user around, but she’s not the only kind of magic user around as well. She’s also an excellent, capable, determined character in her own right without super duper powers to make her so.

I think Joanne’s mother needed some desperate fleshing out (as did her father – but even without him being there there was a lot of context added to his story – and I think he will feature heavily in the next book). I like that we saw more of her than just the narrow bit of knowledge Joanne had – but in the end I think she was still kind of hedged in as Joanne’s mother, especially at the end, and she needed more than that.

I loved the clueless inability to grasp Irish spelling, it amused the part of me that is exasperated by the parents who have named their kids “Shevorn”.

There wasn’t as much focus on Joanne’s Native American ancestry this book, since it was more focused on her Irish side of the family, but it was still there and acknowledged – and we touched a lot on it both last book and, I think, will in the next book – so over the series it works. The rest of the cast this book were Irish deities or Aos Si and there was no POC inclusion.