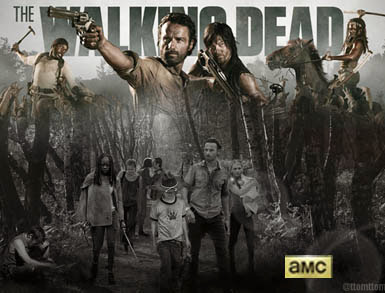 It's night at the prison and someone is feeding the zombies rats.  Inside the prison, Tyreese is making out with Karen and says that he cannot stop thinking about Zack and how people only know a handful of people.  He beings to sing to Karen and invites her to crash at his place but Karen says not just yet. Tyreese and Karen go their separate ways.   Karen heads into the latrine area and grabs some of the infected water to wash up.  When she hears a sound, she begins to search the area.  Zombie Patrick sits up, as Karen continues to move around the kitchen.  Karen makes her way to her cell, and lies down, unaware that Patrick is now roaming around.  Patrick stops in front of her cell but when he hears someone snoring, attacks them instead and bites their throat.  Now there are two zombies walking around the prison.

The next morning, Rick's alarm goes off at 6 AM and he wakes up Carl, as Patrick continues with his snack on D Block.  Rick hands over the baby, as zombie number two gets out of bed.  Glenn is watching Maggie sleep with a smile on his face.  He suddenly grabs his camera and takes a picture, waking Maggie up.  Where did he find that old Polaroid?  Glenn promises to bring Maggie breakfast after perimeter check and leaves.

Michonne is getting ready to leave and Rick tells her to be careful.  Michonne asks why Carl doesn't wear the hat anymore and Carl says it's not a farming hat.  Rick and Carl then get to work in the garden but as always, the zombies are lining the fence.  Carl suggests helping to get rid of the zombies but Rick says that he has other plans for the day.  Carl asks if he can help but Rick plans to keep Carl working all day.  Carl tells Rick that he has been trying and wants to know when he can have his gun back.  Rick goes back to talking about the garden.  Suddenly, gunfire goes off and Rick goes running.  Michonne makes her way back to the prison and Carl lets her in.   Two zombies attack her and Carl grabs a shot gun.

All hell is breaking loose in the prison and Darryl, Carol, Rick and Glenn are doing their best to fight off the zombies.  Rick is handed a gun be he grabs a shovel instead. One kid runs, screaming that she has forgotten everything Carol has taught her.  Carol attempts to save one man by amputating his arm but notices that he been bitten in the back of the neck.  They manage to kill off the zombies and find Patrick.

The residents of the prison begin the clean, up as Carol wraps the belt around Ryan's arm.  Ryan tells Carol to care about his children because they don't have anybody else.  Carol promises to look out for them and asks if he is up to saying goodbye.

Rick examines Patrick and realises that he has no wounds and just died.  Hershel says that he choked to death on his blood.  They begin to debate how he died and realise that he was infected .Dr. Subramanian explains about how common these infections are.  Hershel says that pigs must have spread the disease.  They consider that bugs like to run through close quarters and Hershel points out that they have all been exposed. Why no one thought about how living so closely together could be a problem is beyond me.

Carol brings in the children to say goodbye to their father.  Ryan tells Lizzie to take care of her sister Molly.  Carol ushers them out the room and says she is going to do what she has to do.  Lizzie grabs Carol's hand saying that she should be the one.  Carol hands over the knife and says that Lizzie has to do it before he turns.  Lizzie starts to panic and Carol grabs the knife and sticks it in the Ryan's brain, as the children cry.

Maggie and Carl are helping a wounded Michonne. Rick approaches and as they surround them, he tells him to back away. Carl admit to using one of the guns by the gate. Maggie asks what happened in there and Rick tells them about Patrick.  Rick tells Carl that Patrick was a good kid and that they lost a lot of good people.  Rick adds that the shouldn't get close to anyone who was exposed.

At the meeting table, they realize they need to separate everyone. Hershel points out that the illness can be lethal. They suggest using death row to seperate the people.

Karen and Tyreese are walking and she starts to cough.  Glenn tells Karen that Patrick died of a flu.  Hershel says that anyone who has been exposed should stay away and asks people not to panic.  They promise to get Caleb to take a look at her.  Karen says that David has also been coughing. When Karen and Hershel leave, Hershel tells Darryl to wear gloves and a mask to deal with the dead.


Darryl is digging graves when Rick approaches.  Rick says that he wasn't much use without his gun and Darryl assures him that they wouldn't be there without him.  Rick says that he has screwed up too many times and that he almost lost Carl.  Darryl tells him that he has earned the break.  Suddenly, Maggie screams for their attention.  The walkers have gathered at the fence and are causing the fence to become loose by the mere weight of their presence.  Darryl, Maaggie start to kill the zombies and Rick is slow to react.

Beth asks Michonne if she has seen anything and Beth says that she doesn't want to know who.  Michonne says that she should have just been left out there but Beth says that they care about her.  Beth continues to wrap Michonne's leg and asks if any kids died. On the floor, Judith starts to cry and Beth picks her up.  Michonne asks if Judith always cries like this.

At the fence, they continue to take zombies out. Sasha finds the corpses of dead rats and realises that the zombies are being fed.  The fence is starting to collapse. Darryl orders everyone back and Sasha points out that if the fence keeps bending in that the walker are coming over it.  Rick tell Darryl to get the truck.

In the prison Carol, approaches Carl, who wonders if Patrick was catholic.  Carol asks if Carl plan to tell Rick what he saw in the library.  Carol adds that she has to keep teaching the kids to survive.  Carl asks if she told the parents and Carol says that if she does, then maybe after this they'll understand. Carl says it's between Carol and them.  Carol points out that if he tells Rick, he will tell the parents and assures Carl that she is not asking him to lie.

Michonne is working out, while in the background Beth is singing.  Judith is still cranky and crying and when she spits up, Beth asks Michonne to hold her.  Michonne says no until Beth begs.  Michonne holds Judith at arms length and then begins to cry and hold her close.

Maggie opens the fence, as Darryl drives a jeep through with Rick in the back.  Rick grabs a pig and slices it down the side and leaves it for the zombies, as he and Darryl ride away. They stop after a few feet and slice and release another pig. Rick ends up with pig blood on his face and is clearly disturbed by what he has done.

Carol has the kids in front of the fence and tells them that they can feel bad about their dad dying.  She cuts some flowers and tuck it behind the hair of Molly, who takes her hand in return.

Rick is back on prison grounds and he is disassembling the pig den.  Carl wonders if the pigs made people sick and Rick advises that they should stay away from Judith for awhile.  Carl tells Rick that Carol has been teaching the kids how to use weapons and adds that Carol didn't want him to know.  Carl suggests that they let Carol do what she is doing.  Rick dumps gasoline and thanks Carl for telling him. Rick says that he won't stop Carol, or say anything, and then lights the remains of the pen on fire.  Rick then gives Carl his gun back and straps on his holster.  Rick takes off his shirt and throws it into the fire, then turns to look at the zombies once again lining the fence.

Tyreese goes to see Karen and finds the cell covered in blood.  He walks further and finds a trail of blood.  When he heads outside, Tyreese finds two bodies smoldering with gas cans beside them.  One is clearly Karen because she is wearing her bracelet.

Well that was another action packed episode of  The Walking Dead.  Clearly all of the extra bodies from Woodbury are going to be used for zombie fodder.  This week we got a clear idea of how dangerous a virus can be to the survivors.  If you looked closely it was evident which zombies died of infection.  I thought it interesting that the immediately went to the pigs, especially considering that animals and humans don't pass diseases to each other readily.  It seems far more plausible that they are having problems with disease because they are surrounded by bodies which are rotting.

Last episode we saw a Rick dedicated to becoming a farmer, clearly wanting to invest in the idea that the worst was behind them.  He was in a sort of mental utopia and even used an MP3 player to blot out the reality of the zombies at the gate. Even when confronted by a prison overrun with zombies Rick refused a gun.  At the end we seen not only Rick strapping on his weapons but handing a gun back to Carl.  Clearly, the reality of what happened has forced him to understand that they are not safe.

So far, we don't know much about Michonne's back story.  Last season, she was nothing more than the angry Black woman, giving stank eye to anyone who dared to look in her direction.  The first episode of this season, is the first smile we have seen from her.  See her cry holding Judith heavily implies that at some point she lost a child, and I can only hope that the writers explore this and continue to build her character.

Clearly something is going on at the prison.  We know that somebody is feeding the zombies and now we know that someone killed Karen.  Clearly, Tyreese is not going to take this lying down.  It does however disturb me that it will take the death of a woman to turn him from a passive into an active character.  In this way, Karen's life is nothing more than a means to and end.