Glitter & Doom (Masque of the Red Death #1.5) by Bethany Griffin 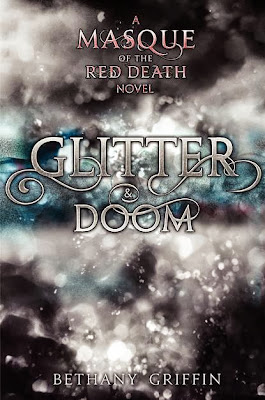 I always have mixed feelings about novellas in a series since I so often don’t see the point of them, perhaps due to my general love of meta in all things.

I find novellas frustrating because they often don’t have anything to add to the series and they’re too short to develop any kind of engaging story in their own right to pull me in. Sometimes they’re an interesting “day in the life” insight into the characters when they’re not facing the epic plot of epicness – which can be interesting character development but even that is of mixed utility, especially if it’s done before.

Without something to add to the main story – some advanced world building or plot or character development, something that will reflect on the main story I’m usually left feeling like the book was rather pointless, an unnecessary addition clinging to a main plotline at best or a cynical money grab at worst. At the same time, if the entire main meta rests on development revealed in a novella or short story, I find it annoying because such major developments should really be woven into the main plot line, not included in a novella which, I confess, I generally consider an add-on to a series rather than essential reading.

In all, I’m pretty difficult to please when it comes to novellas.

And all that being said, Glitter and Doom was one of those books that got it right.

Of course, part of the reason Glitter and Doom really worked for me was the same reason I found Dance of the Red Death kind of disappointing. The whole series follows Araby around when, frankly, she’s the least interesting and compelling character there is. Quite literally, just about everyone else: April, Elliot, Kent, Will, even Will’s younger siblings, would be more interesting protagonists than Araby. I actually want to praise the quality of these side characters but am stopped by the sheer lack of any compelling qualities in the protagonist herself.

Which is where Glitter and Doom comes in –a book that is about April and Kent and even a little Elliot. We get to see the backstories of Elliot that we missed and that add so much texture to his character. We get to see who Kent was, what motivated him, why he was involved, how he met April and how he actually became one of the team – rather than just a character who was dropped into the plot rather randomly.

In terms of story, there isn’t much there. In fact, there isn’t one. It’s completely impossible to read this book if you hadn’t read the first book because this novella is just a behind the scenes look at the plot that has already happened. It doesn’t tell the story, it fills in what was happening “back stage” while we were been dragged around with Araby.

It is also extremely short .