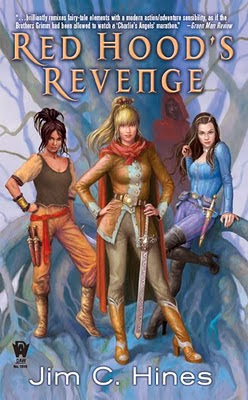 Roudette, infamous assassin, has a new target. Everyone assumes it’s Danielle and rallies to protect her – not suspecting that Talia is her main target

Nor that simple assassination is the last thing on her mind.

Caught up in a complicated, unimaginable scheme, Danielle, Talia and Snow White are transported to Arathea, Talia’s homeland. The land where she is still wanted for murder and a home she hasn’t seen for years.

And a land under threat. It’s a bittersweet homecoming and an extremely difficult and complex on – but Talia will save her people.

I love that we got more of the backstory of Talia in this book. We’d had some backstory on Snow but, ultimately, Danielle was the star of the series and it was her story, her family and her life that we focused on; inevitably this reduced the other 2 princesses to sidekicks. This was Talia’s book – and it was also a book that was heavily influenced by aspects of her character that in so many books in this genre would either not exist – or would be alluded to then quickly shuffled into a corner never to be seen again: namely that she is a Lesbian and a WOC.

We meet Talia’s first love, and it is love not lust, they have a relationship, they reconnect and Talia clearly values her as much as her friends Snow and Danielle. She isn’t secondary to them in Talia’s eyes and Talia risks all and deviates her quest in order to reconnect with her and save her. She matters to Talia and their scenes together make that clear – which makes their ending all the more frustrating.

Most of the book also takes part in Talia’s homeland – a Fantasy Middle Eastern parallel – which manages to get a considerable sense of culture and place without resorting to so many of the really tired, offensive stereotypes. There’s a lot of effort gone into making a full culture here, with a full history and populated by actual people. Not only are they not presented with many of the damaging stereotypes, but they’re free from exoticisation as well; yes Danielle and Snow are lost, but they’re presented as just that, people from a foreign land in an unfamiliar place. It helps that we see much of the story through Talia’s eyes and she has a real sense of familiarity and home coming which flies in the face of any attempt to present an alien, strange, exotic land.

We also had some wonderful development of the world – the history of the fae, the different forms of fae and human conflict that have touched every country in the world and the legends behind that. The whole faerie church and nature of religion – both as something sincerely believed and bringing healing and help to many AND a deceptive implement of social control to forward nefarious schemes was well handled. I also like that the fae in Lorindar are very different creatures from the fae in Arathea. A lot of fantasy books miss this – we will see 8 different human nations and then “the fae.” Or “the elves”. It’s nice to see mystical woo-woo creatures that are as divided and divergent as we are – after all, why wouldn’t they be? It’s a nice touch.

Which brings us to Roudette, Red Hood. Despite her name on the book, this is still more Talia’s story than Red Riding Hood’s – but I loved the twist all the same. Ok the nature of Roudette is one I’ve seen before – but it’s still a twist I enjoy. Especially the extra twists into her story, the Wild Hunt, the real story of her Grandmother (even keeping the big eyes and teeth) and Roudette being an assassin were all things that really worked for me. I could really believe that, yes, this is what really happened before the romanticism hit. It feels realistic, the hard, cruel core lurking under layers of fluffy happy tales.

It helped that Roudette was such a nuanced character. Far from a good person, there were layers and depth to her that, in the end, left me wondering about her. You can’t say she was on anyone’s side because, ultimately, many people aren’t – they’re on their own sides with their own agendas, their own motives and their own lives, not just extras in someone else’s battle.

Those twists are also reflected in the story – we have a big reveal followed by another big reveal followed by a completely contradictory big reveal. And nothing is really neat and nothing is really tidy – which I think works really well as a reimagined fairy tale BECAUSE fairy tales are so neat and tidy. The bad guys are evil, the good guys are precious and pure and infallible. Good wins, unreservedly, evil is vanquished, unquestionably. Fairy tales are neat (at least Disneyfied ones anyway, the originals tend to be much nastier and bloodier). This reimagined fairytale decidedly isn’t neat, it’s nuanced and complex with few easy answers.

The story also finally grabbed me – there was a problem early on when I got a little lost and I’m still not entirely sure how Talia managed to convince the soldiers to join her in the end – but the story carried me far better than previous books in the series; I was invested, I was interested.

I did very much want Talia’s story to end differently (and I’m outright annoyed by Danielle negotiating for her without consulting Talia first) – it’s especially glaring how different her tale is form how Danielle’s ended. I know there’s a motive to keep the series going and keep the three princesses together and there’s also Snow White’s story which hasn’t exactly ended in Happily Ever After either – yet Snow White’s is still to come. This leaves me with a reaction that is going to have to be belated – I will be unhappy if Snow also ends up with no fulfilling ending to her story and very angry and extremely unhappy if she does since that would single out Talia.

This book finally broke the barrier for me. In Stepsister Scheme, and Mermaid’s Madness there was something that stopped me loving the books. Some long windedness in the writing, some linearness in the plots, just something that manages to stop all the awesome elements coming together into something I loved.

Whatever that something was, it was missing in this book (perhaps because the nuance was more heavily presented, though Mermaid’s Madness had more than its share) but this one cracked it. I loved it and it was the best book in the series to date for me.