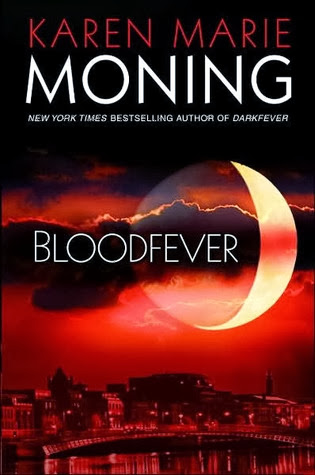 Mac is still in Dublin, working with Barrons to find the Sinsar Dub and defeat the Lord Master, the man responsible for her sister’s death and the man who is bringing ever more Unseelie into the city. In her quest to find the book, she and Barrons look for other objects of power and she tries to decide who to trust and how to learn more about the strange world she has been thrust into.

I am assured that this series does get better, I’m assured the plot becomes more exciting, the world develops and, in particular, Mac, the protagonist becomes more sensible and mature and I will actually root for her rather than one of the Unseelie chomping on her bones, nom nom nom.

I’m assuming all of this happens in a later book – because it didn’t in this one. Where are those hungry Unseelie?

The first element I couldn’t pass over was the complete and utter lack of plot – nothing really happened in this book, there was no coherent storyline. Oh, there were events, random events poking their heads up from time to time, but they were just that, random encounters, with no real rhyme or reason, no real connection to each other and more than a few of them happened either because of sheer random chance or through Mac’s own monumentally foolish spunkiness often through simply poor writing or characterisation. And then none of these events actually go anywhere – they happen, they then fade back into some kind of background idea.

How does she run into the Sidhe-Seers? She randomly runs into one of them in the street who, despite the eternal watch word “don’t let them know you can see them”, lets slip that she can see them. She goes to meet them aaaaand… nothing happens. How does Mac end up with V’Lane? Because Barrons’s shop assistant tries to murder her over random, unexplained and unfounded extreme jealousy. And does that faerie jaunt actually have any real long term effects on, well, anything? Nope. There’s the Hallow she and Barrons spend a decent amount of the book looking for – does it make any relevant difference to the actual story? Nope. The odd guy in the history department she thinks are cute turn out to know about the fae – how does he? Because Mac randomly decides to show him her diary. Why? Who know?! Even the big ending felt awfully tacked on – a character who could easily have been dead in the last book pops up to reveal very little, do very little, achieve very little, but take up page space and result in the book ending with everyone in exactly the same place they were when this book started.

Look, I can see how this is all foreshadowing for future events and it’s setting various forces and players in motion – which is fine but there needs to be something else! Have the flesh of foreshadowng, but you need a backbone of a plot to keep the book going – otherwise it’s just a big mushy pile of events and foreshadowing with no structure.


I don’t like Mac – I know I’m not exactly supposed to like her, this is early Mac who is going to get a lot more worldly – but she bothered me in many ways. She frequently made ridiculous decisions – like the aforementioned showing her diary of fairy knowledge to random strangers in the pub. But also we have breaking into Barrons’ garage then being surprised his collection of classic cars actually has security. Or she trips over a freaking OTTOMAN clearing out Shades in Barrons’s shop. This is a task that literally requires you to be able to manage 3 things: hold a torch, walk and operate a light switch. She could not do it. And she keeps a lot of essential secrets from Barrons – and, I get it, Barrons is an arsehole (more on that later) who treats her like shit but “ha he’s keeping secrets, so I will too!” looks ridiculously childish – especially when keeping those secrets only gets her in trouble (especially the fact she’s being stalked by a sinister shadowy figure).

Aside from Mac having the brains of a concussed prawn, she’s also not that nice a person. Her indifference to a man being murdered because he tried to investigate her sister’s death is stunning. Her treatment of her parents because she’s adopted is gross. And I loved her standing up to the other Sidhe-seers and cheered that Mac didn’t trust them (now if she could apply that to, say, random people in pubs as well). But her motivation is because the Sidhe-seers didn’t risk life and limb to save her in a desperate situation? Her entitlement through the discussion, her resentment of them not putting her first is palpable, especially when she has never risked herself for others – despite seeing the Unseelie prey upon humans all the time.

Then there’s Barrons the Arsehole. Barrons who tells her nothing, Barrons who orders her around like a small child (and then is always RIGHT, as if that’s a validation of his treating her like a small child). Barrons has zero respect for her and constantly makes demands without any explanation. There’s also a horrible moment I won’t spoil – but Barrons wants to permanently do something to Mac against her will. She defies him and it looks like at last we have some strength… but then he does it anyway and the plot then VALIDATES HIS ACTIONS. She told him not to, she drew a very firm line, he did it anyway – and she then has to say thank you because it was so vital.

The world building is also… shallow. There’s a lot of fae myths been brought in, but the actual depiction of Ireland feels shoddy. Like the driving license Barrons apparently has that doesn’t even remotely resemble European driving licenses – but sounds a lot like an American license. The measuring of human weight in lbs (not kilos or stones and lbs), the fact Dublin is apparently the soggiest, wettest place on the planet to poor Mac, missing the dry blue skies of Georgia (Dublin’s average rainfall is less than Atlanta’s) and Englismen called “Junior”. And Scotsmen introducing themselves as “of the Clan X”.  Or Mac decides to convince the police she has a reason to stay in Dublin by getting a job – but she’s a tourist, she has no right to work! The police could just as easily use that as an excuse to kick her back to America. And why does an extremely ancient Irish organisation have a motto in English?

Then there’s the writing. It’s so long winded, every few pages we have to have these appalling long internal monologues from Mac either pitying herself, recapping the various characters in the book, reminding us what various things are, recapping the last scene or doing all of the above. At length. As an example - she senses a menacing fae outside her door. She then rambles about clothes, her mother’s disapproval of swearing and myriad other nonsenses for the best part of a page before actually paying attention to the threat.

The remaining character is V’Lane – who is uber-super-duper-sexy and wouldn’t know consent if it hit him across the face with a haddock and he constantly justified his attempts to rape Mac with “I’m so amazingly hot I’m not used to people turning me down”.

Finish off with zero inclusion but the O’Bannions beings deadly dangerous because of that dark, savage, evil Saudi blood in them (that line could be copied and pasted from a Stormfront website)


Is there anything positive to say? The underlying concept has promise, the basic premise could be something good. For that, and because people I trust assure me it will improve, I keep reading – but this book was not something I could recommend.