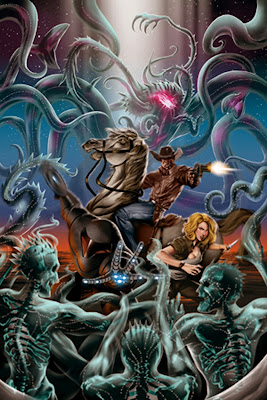 Jefferson has to return home from his new successful life he has built for himself as a successful author. And he’s not very happy about it.

His childhood home is the small, rural town of Piacyune, Mississippi and he’s spent a long time denying he had any part of it – or the skills and persona he once adopted there. The locals aren’t too pleased with his return either and he has a lot of demons to fight.

He also has aliens to fight – the Devourer, a giant, jelly-fish monstrosity scarfing down catfish and turning people into zombies. And he thought locals opposing his property development and trespassing teenagers were the worst he’d have to deal with.

Ok, when I was sent this book I have to admit I looked at the title and said “you have got to be kidding me?!”

But I’ve been surprised by terribly titled books before and I read the text around it and thought I might be surprised. So I accepted, I read it and fully prepared to unleash the snark I was halfway certain I would need to review this book.

I am glad I gave it the chance. There will be no snark. This book was astonishingly deep and nuanced with many shades of characterisation and oppression.

Jefferson, the protagonist is a Black man raised in a predominantly White area of the rural south of the US; he was adopted by a White family and, when his adoptive parents died he was left in the care of his not particularly bright (but very caring) brother.

He faced racism – a considerable amount in fact – as you’d expect. It was well presented, from several sources and always made clear to be unacceptable. It wasn’t covered up or dismissed and it wasn’t sanitised –but nor was it presented in cartoonish, exaggerated sense with lots of melodrama and monologue milked out for every last iota of tortured-protagonist angst. It was an excellent, balanced presentation.

There was also a wonderfully nuanced depiction of well meaning, but short sighted liberal people in this place encouraging Jefferson, as a child to be whatever he wanted to be – and like many children who idolise their big brothers he says “I want to be a redneck like my brother”. Cue the liberal teacher both wanting to encourage him to achieve something more academic since he’s so intelligent – and not wanting to tell the only Black boy in her class that there’s a career he CANNOT do.

There’s a whole lot of nuance in the depiction. And this becomes more complex when we go on to an adult Jefferson who has left this tiny little rural town in the south and moved north to the big city and he’s a super successful author. He returns home for important non-spoiler-so-I-won’t-reveal reasons and his attitudes are very different. He has natural hostility for the racism he faced but there’s also a huge stripe of contemptuous classism. He’s ashamed of where he’s from, he lies in his author biographies, he looks down on his old friends and neighbours and the way they live.

We have a wonderful intersection of oppressions here and a really nuanced presentation of both having a grudge for a very damn good reason but at the same time showing your own prejudices that are unjustified. It’s nuanced and it’s deep and it’s a fascinating, moving and highly emotional characterisation – backed up with some awesome female characters who are willing to call out bullshit, go in guns blazing, make plans, implement plans – and be balanced by victims of both genders. All in all it’s a whole lot deeper than I imagined complete with some excellent poking at some rarely questioned elements (like the second amendment) and a serious look at both poverty and child abuse.

Which sounds deep and big and nuanced. Don’t worry – the “Black Redneck” part was deep and nuanced but the “space zombies” is exactly what it says on the tin! A zany, silly, ridiculously hilarious, gun-blazing adventure against zombie mutant people from outer space! It’s campy, it’s funny, it’s immense fun and it’s so over-the top ludicrous that it’s beyond excellent – and comes with a murderous horse, an alien knocked unconscious by an exploding meth lab, the local Sherriff watching Agatha Christie marathons and a whole lot of guns, explosions and precocious children with hand grenades!

Which is just PERFECT! There’s high emotion and depth and nuance in this book and it’s carried amazingly with a story that is almost ridiculous but so damn fun it lightens the whole thing and makes you run with it. It’s funny, it’s exciting and it’s joyously schlocky and it helps balance the deeper elements of this book perfectly.

I have to recommend this book – that combination of depth and fun is a really hard one to pull off without either disrespecting the depth or dragging down the fun; this hits the sweet spot, this manages to explore some dark and complex issues then go riding through the woods shooting jelly zombie aliens in the head with a shotgun. This can move you with desperate regret and family loss then have a small child fend off their enemies with hand grenades. In many ways it shouldn’t work – but it does, it wonderfully, gloriously does.