The Portrayal of Carol on The Walking Dead 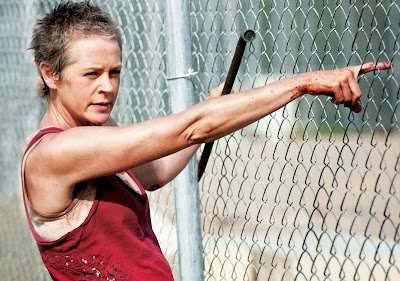 When we first met Carol she was just the abused wife of Ed. Carol never made eye contact with people and she was constantly silent. The first time we saw Carol smile and laugh in the first season, Ed was quick to punish her and remind her that she existed solely to be his servant. After Ed died Carol was still pretty passive, depending on other members of the group to come to her defense and fight the walkers. We very rarely saw Carol with a gun and she spoke very little, with the exception of occasionally engaging in conversation with Darryl. It was not until after Sophia died that we saw a shift in Carol. Suddenly she became the woman willing to do what had to be done. For the first time, she actively fought off zombies and was not afraid. Carol even began to teach the kids to be able to fight even though their parents disagreed, sure in the knowledge that the ability to kill a Walker is an essential life skill. To look at the character of Carol, is to see the greatest growth and shift of any character on The Walking Dead.


When we think of women who have faced gender based violence, the word “victim” comes to mind. Carol spun this definition completely when she stated that to survive everything that she had, she must have always been strong. Carol kept her household running, covered the bruises, she even learned how to set her own dislocated arms - and raised her daughter. Every damn day must have been struggle but she did it and she didn’t give up. That takes a strength of character that few realise and is certainly rarely portrayed in the media. Domestic violence victims are usually presented as weak or fragile, vulnerable or in need of rescue. To be clear, living with domestic violence is a terrible thing but it is foolish to think that women who do so are weak, as Carol so eloquently pointed out. Carol was never a victim; she has always been a survivor.


This week, Rick told Carol that she had to leave the group because he didn’t trust her. Many avid fans were disturbed by this and even suggested that the loss of Carol would eventually lead to problems within the group. The issue between Rick and Carol really isn’t about trust but fear. Carol saw Rick for exactly who is he is and that is why Carol told him that he couldn’t just be a farmer. Even more than Rick, Carol is now unafraid to see the world for what it is and do what needs to be done to survive. By her very nature, Carol stood to eclipse not only Rick, but every other male character on the show. Darryl doesn’t have Carol’s people skills, Rick is in denial about the dystopian world he’s in, Herschel is neither active enough nor ruthless enough and has his own sense of denial, Tyrese was very passive and is now very angry and Glenn is focused primarily on Maggie - who else could step forward and leader? Who else is connected to the whole group, respected by them, is a capable fighter and both actively training the children for this new world AND trying to get the adults to step up to her level? Who else is actively preparing the entire group to face the world they are in?


Carol easily outstripped every single man on this show. And in a dystopian world where men are always active and women passive, this could not be allowed to happen. The Carol of the television world is quite different from the one we met in the comics but that doesn't mean that the writers were willing to shift the model of straight, White, male leadership that they have designed their story around; with that in mind, Carol had to go.


This is particularly brought home when contrast the TV Carol and not just with the Comics Carol but just about every female character in The Walking Dead Comics.


In season 4, Carol has tackled a moral dilemma that we have seen face Rick repeatedly in the comics - the battle of whether to kill a person for the greater good. Whether to sacrifice a person for the sake of the rest of the group, whether someone is too dangerous to allow to live. These are all conundrums that not only Rick has faced as leader of the group but so have other male leaders - like Herschel in his decision to evict Rick’s group from the farm. More than Carol making this moral choice, she chose to do so unilaterally - without consulting anyone else, she decided to make a decision for the greater good. She saw a problem and she chose to fix it, she assumed the authority - she showed the presumption - to act on her own to correct this. 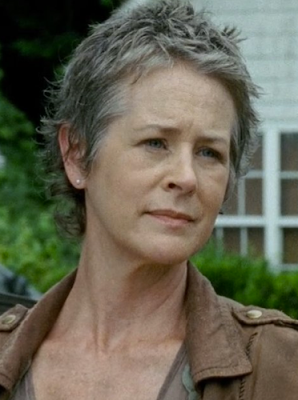 Whether we agree with Carol’s decision or not, it is still an astounding change that Carol had the confidence, the power and the authority to make this decision - to dare to make this decision. In the comics we have often complained that no woman has ever been included in the decision making processes. The group formed ruling councils without any female members; Michonne and Andrea, the only real examples of female strength in the comics, are only strong because they are weapons - they are never consulted for leadership decisions and Rick actively keeps secrets from them without any good reason. Women do not make decisions in The Walking Dead comics, they do not question the men, they certainly do not take unilateral action. That has always been the domain of the men in general and Rick in particular.


Carol is not only one of the best characters on The Walking Dead TV series, but one of the best female characters out there. Her growth, her depth, her complexity have all been a joy to behold and incredibly well presented in a way that creates a true Strong Female Character - not a super-lethal character or one with special woo-woo or amazing, unbelievable talents - but a Strong character because of depth, because of characterisation and because she challenges one of the primary sexist tropes not just of The Walking Dead but of dystopians in general - the idea that women do not lead and do not make decisions.


And could there be a better person to have at your side in a zombie apocalypse?