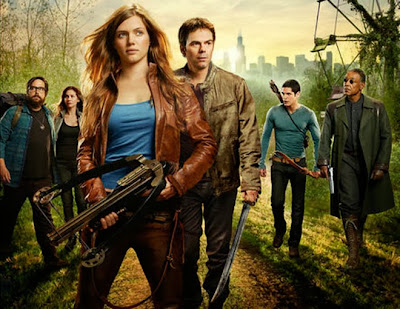 Rachel digs up Monroe – who isn’t dead. Are we shocked? Yes, this is my shocked face. Actually I’m kinda shocked because Rachel is actually doing something which MAY not cause a complete apocalypse – which is kind of unusual. Rachel being active usually leads to the end of the world in some fashion.

Monroe wakes up with Rachel, Miles and Charlie stood over him – and he’s so completely out of it on drugs he babbles on about how Miles missed him and is his bestest friend. He also wants to know where is son is. Charlie wants to know why Rachel had the whole 180 on Monroe – Rachel says because they need him. And because Charlie asked her to.

Living under the Patriots isn’t all wonderful – Cynthia complains to Aaron that the Patriots are dictating what books they can teach to children, Aaron’s worried about being overheard and a building explodes. A rather big explosion at that.

Aaron quickly checks on Cynthia as they were both thrown to the floor, she’s fine – but many others aren’t. Dramatic scenes of the injured follow and Rachel runs to help her dad, the doctor, help people. He has his surly face on.

Gene angrily confronts Patriot head Truman and accuses him of setting off the bomb and killing 3 people. Truman’s not having it – calling Willoughby the USA’s town and adding that it’s Gene’s job to keep the town healthy, happy and compliant (“compliant” huh? That’s an expansion) – if Gene is a loyal American that is. So much for Gene opening his eyes and confronting his bosses.

Truman makes a dramatic speech about the attack blaming more killing clans and, of course, justifying a larger military presence, imposing a curfew and sealing the gates. Keep ‘em scared and people will accept anything to keep them safe. And Rachel is taken aside by Calvin – a doctor who worked in the same department as her when she worked on creating the Nanites that turned off the power. He wants to talk.

Apparently Calvin is now the presidents senior science advisor. He was the one who made the wanted posters for her – because he wanted to learn about nano-tech from her, which he calls a genius accomplishment (though she doesn’t accept that because of how much damage it did – he says it’s still genius, even if it is disastrous). He also realises the nanites can do so much more than turn off the lights – and shows her pictures of the people Aaron burned with the nanites. He thinks the nanites have been modified – which Rachel claims is impossible. He’s not buying it – why here, of all the towns the patriots control – are the nanites acting up – if she’s not behind it, who is?

On to Rachel & co meeting with Aaron and warning him that Calvin’s going to want to get vivisecting. They have to get him out of the town with Monroe – which Aaron is so thrilled about since he trusts Monroe as far as he can throw him. Either way, he is not leaving without Cynthia, because if someone wants to get Aaron, they will use Cynthia.

Flick to Gene who is looking all tortured and having a flashback to 7 years after the blackout where he and what looks like the whole town are gathered to bury and burn several wrapped bodies. The town had a cholera outbreak that took his wife among the dead and when he returns home there’s a man waiting for him offering sympathy – and with a cholera vaccine. The man says he doesn’t want Americans to die from a “grimy 3rd world disease” and wants Genen’s help getting his country back

He goes to see Truman and meets Calvin: he recognises the Triangle symbol some of the patriots use on Calvin’s jacket and has a flash of people being tortured and a cloth with that symbol. Calvin wants to know if Rachel has said anything about him – sorry Calvin, I guess you’re not high on her priorities list. Gene also doesn’t seem to be that thrilled with the idea of spying on his daughter. And has another flashback:

9 years after the Blackout now, watching a man being tortured and helping them to keep the victim conscious when he passes out. Gene is clearly troubled by this but in return the Patriots give his town medicine – and assure him they’re the good guys.

Unable to leave Willoughby, Miles uses reflective metal to send a message to the still slightly zonked Monroe. Charlie has checked the guards and there’s a lot more than usual. They don’t know what the Patriots are planning but there’s no way they can get Aaron out – which is when Gene appears (you need to make your secret plotting more secret guys) and volunteers to get Gene and Aaron to freedom! He has a cart with a hidden compartment that he takes out of town to go find medicine – and they’ll let him out because they still need meds, even the troops. Rachel is wary – but Gene says he has to do it – this is his redemption moment for all the blind eyes he’s been turning.

Aaron apologises to Cynthia for making her leave her home – but she tells him home is where they both are.

And Gene meets an old friend – Shaw, the man he used to help torture people. He takes Gene on to see Calvin who wants to know all about Aaron – especially how he came back to life. Calvin thinks Rachel used the nanites to resurrect him; and Aaron has gone missing. Gene stands firm and rather than claiming ignorance starts talking about how he regretted working for the Patriots and how wrong her was to think they were helping. Calvin says what I’m thinking – it’s a little late to be clutching his pearls now and mocks Gene’s attempt to downplay his role in the killing and torture. Calvin threatens to slaughter the town until Gene co-operates and Gene folds - Aaron is the one controlling the machines.

Gene leads them to where they plan to get Aaron out of the town – but Rachel doesn’t show up. She and Miles are watching from a distance – Miles suspected that Gene was one of the Patriots (technically true) and commiserates with Rachel that her father is a torturing murderer who betrayed his own family. There there. Making awful decisions may be a family trait. (Miles then unnecessarily explains how he figured out that Gene was a traitor). When they don’t show, Calvin rightly guesses that Gene has been revealed as a spy – and that his daughter is going to be Very Unhappy.

The gang are all following Plan B: go through the sewer tunnels while Truman orders all his men to find Aaron and Rachel at all costs. And Calvin notices the sewer lines on the city plans. A troop of men find the building they’re in and begin pounding on the door as Aaron and Cynthia escape into the sewers. They follow the tunnel along and come out outside the town – to two men pointing guns at them. Things look difficult – until Monroe attacks both men and easily slaughters them. Then has a sit down – he’s still kinda woozy.

More guards arrive with automatic weapons – Monroe runs and Aaron and Cynthia take cover. The guards reach Aaron and start dragging him and Cynthia away. The glowing fireflies appear and the two guards on him and Cynthia become human torches – while Monroe kills the other two while they’re distracted. Cynthia and Monroe both give us stunned eyes witnessing the man who burns people with his brain

Monroe leads them away, he thinks burning people is a nifty trick and Cynthia is terrified of him though Aaron reassures her (not only because Monroe is on her side but Aaron could pull the burny burny trick) – but she’s not afraid of Monroe. She’s afraid of the guy who KILLS PEOPLE HORRIBLY WITH HIS MIND!

As far as fears go, it’s not that unreasonable

Back at Willoughby, Calvin threatens Gene again. Just for funsies really. Miles, Rachel and Charlie need to be escaping but, alas, something bad has happened in Rachel’s life which means COMPLETE AND UTTER COLLAPSE must now follow. Someone find this woman a bed to take to. She sobs inconsolably and Charlie holds her.

Now to the east, Neville is still trying to deprogram his son Jason after being in the Patriot training camp and Justine still thinks it’s a waste of time and that Jason will most definitely kill them both – especially since more cadets are approaching and they need to leave stealthily. Neville cuts Jason free – but also threatens him with death.

They move out across some fields with the odd ruined farm building and are ambushed by cadets. They take cover and Neville indicates that he doesn’t have any bullets. Jason grabs Justine and yells that he’s a cadet and has a captive. He goes in shouting that he’s a cadet. There’s a moment’s silence and he calls Neville to come in, it’s safe. Justine doesn’t agree – but when Neville goes he finds Jason, with a knife and a fair bit of blood – and some dead bodies. Lots of powerful nearly expressionless face acting I’m not even going to begin to try and parse – Jason gives the knife to Neville, his hands still bound.

That night they have a nice bonfire and Justine wants to leave, even though she’s a wanted fugitive to the Patriots. She had written off her son as beyond hope when he became a cadet, but seeing Jason save Neville’s life has convinced her there’s a chance she can reach her son. She gave up on him and that preys on her; then she collapses suddenly. Jason asks what Neville did to her and gets a patented Neville look in response.

Justine wakes up when Neville throws a bucket of water on her and she’s chained; he reminds Justine that she really should have been worried about trusting Neville not Jason. Her husband is Patriot High Command – he wants to know where her husband is

“Grimy third world disease” is unnecessary and stigmatising with a whole lot of west-is-best thrown in. Especially since there are so many other way he could have expressed his horror over Americans dying of a disease they thought long since defeated there.

Wording aside, these are elements of a dystopian I like to see explored because they so rarely are. Dystopians taking part in modern, developed settings forget just how many advantages we get from the technology, hygiene, medicine et al that we take for granted – just things like clean tap water make so much difference. It’s interesting to see that both Revolution and The Walking Dead are now touching on or exploring these elements – adding more depth to their dystopian worlds.

I’m torn – I want Justine on side and more developed but at the same time I like that Neville is so very focused on his own goals and won’t be derailed from that.