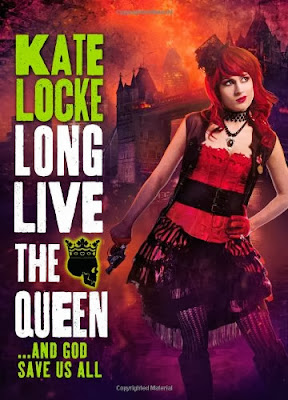 Xandra, Goblin Queen, is coming more and more accustomed to being a goblin and even staring down Victoria (or sniping at her across the table) but even as her life grows more stable the city and the country succumbs to more and more unrest. There’s a movement led by Xandra’s own mother to depose the aristocracy, some vampire aristocrats are gunning for the Queen, the human masses are rising up violently – and under it all the brutal, horrific experimentations continue in secret laboratories on half-bloods; inflaming all factions.

Into this powder keg a creature is released – she looks a lot like Xandra but is even more dangerous. But who was she created to target? Xandra? Victoria? Or just causing mayhem? As anger on the street grows and the hunt for the monster grows more pressing, Xandra has to play politician and diplomat to try and bring the country back from the edge of civil war.

This plot grabbed me and held me – even though it took me to the edge of cringing several times, it also backed off every time. I kept thinking “no, she’s going to play mummy and ignore the danger!” or “no she’s going to risk everyone for this creature!” And it didn’t happen. She was sympathetic – but she wasn’t a fool. The plot itself had twist within twist – ok, I knew who the big bad was pretty early (he wasn’t exactly subtle – or, rather, he was subtle but it was such a classic trope) but who was working with him, why and, ultimately, what his end game was remained a mystery right until the end. With Xandra’s father, the Queen, her mother, her sister and so many other figures constantly stepping into the shade as possible accomplices – then out then back in again it was a mystery to see who Xandra could trust and who it would finally be who turned on her in the end.

The action was exciting, the intrigue was deep without being confusing and the twists were twisting indeed all working extremely well with this setting which I love so much

I love Xandra’s growth as a character – her growing acceptance of being a goblin and not just that she is a goblin but her place in goblin society, her growing affection and ties to the other goblins and their practices. It’s amazing how a book can present its protagonist starting to eat human flesh and it still be read as an excellent moment of character growth and self-acceptance. Yes, I cheered the cannibalism!  Beyond the goblins, Xandra is accepting her role as aristocrat and a leader and even slowly expands her viewpoint beyond her people to the country as a whole. I love her transition between wanting to keep her people and loved ones safe (and viewing Victoria as a threat) to slowly seeing the wider societal problems that are tearing the country up (and viewing Victoria as an important ally, even if they still don’t get on). There’s a definite shift in Xandra, a lot of growth – but still that fierce loyalty that characterised her more than anything.

We have some strong diversity of cast between Xandy’s siblings and friends – Val and Penny are both Asian, Penny is trans, Avery is a lesbian as is her fiancée Emma who is also Black. The British Prime Minister is also a Black woman. Many of these characters play substantial roles, if not main roles – and they’re all pretty free from any kind of major stereotyping. In fact there’s a distinct opposite of stereotypes to most of them to an extent that also takes us away from previous books in the series. None of them are centre stage – but they’re there, they’re there a lot and ensure that Xandra, Vex, William and Victoria act with a powerful background of diversity.

On the gender front, this book wins on many levels. We have several women who are powerful in different ways (Avery’s easy crying being seen as a strength, for example, because she never represses or bottles up emotion), lots of fighting skill but also lots of strong brains. Xandra is extremely dangerous – but she’s also an investigator, playing to PR and a peacebringer – being a goblin and ripping people’s spleens out will not save the day. Xandra is reckless and a risk taker and Vex does complain at her about that – but he avoids patronising her, even when she is tearfully admitting she is wrong, he doesn’t order her or instruct her. He asks, he begs, and demands and, when he feels he pushes too far, he also falls back on wanting Xandra to remain true to herself. Even if that does mean taking the risks that give him grey hairs.

There is a lot of sniping between Xandra and Victoria – and sometimes it borders on ridiculous and I wish it were more toned down. But I think there’s a sense of 2 queens resenting the competition more than 2 strong women who hate each other which is so common in the genre. Also, despite Victoria often being presented as a threat, enemy or problem – Xandra and Victoria do begin to respect one another more and more.

The underlying premise of the series continues to be a wonderful analysis of multiple layers of class and the different facets at war with each other. Humanity are extremely numerous – but don’t have the physical superiority, the resources or the authority of the vampires and the werewolves – the aristocracy who rule over the country. Humanity lives under the unfair and unjust aristocrat  rule while at the same time the aristocrats, terrified of humanity’s numbers and aggression, cower in their fortified neighbourhoods and live in constant fear of humanity and a human uprising, the Queen herself with all her power, unwilling to leave her palace out of fear of human protestors. In between we have the half-bloods – tools and servants of the aristocrats, raised from birth to hate humans and to see themselves as natural servants, having little control or choice in their own destiny and kept in control with often illusory family ties. The way the aristocrats view them as a tool is epitomised in the very nature of the labs – built to experiment on half-bloods in the hope to enhance the numbers of and power of the aristos. Humanity may be a mass to be feared, but the half-bloods are useful tools, rarely given the respect of fear, property and things to be used by many factions of the aristocracy as they see fit. While the labs are the most blatant examples of this, Xandy also comments that Victoria’s servants are also half-bloods, ones sent by the academy once it was decided how each halfblood could best serve the aristocrats: they are pushed into roles of service, whether bodyguard or maid.

All these conflicting factions are further complicated and fascinating by the power each strata has. The goblins are reviled and shunned – and even cheated out of their heritage and inheritance – but they’re also the most physically powerful and terrifying of all the plague-blooded. The aristocrats are powerful – but human numbers and anger leaves them cowering and hiding. Humanity is the big threat that looms over aristo life, but they’re also the poorest, the disenfranchised and the most helpless when caught alone or in small groups. There’s a fascinating interweaving of power and strengths here that builds up a really excellent background and world to play in.