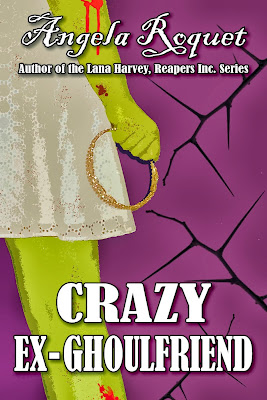 Janie is an outsider, a geek and ostracised at school. But that all changes when Matilda, chief Mean Girl, dies in a car crash.

And then comes back. She has one purpose in life – go to the prom with her boyfriend, Wayne – and if Janie doesn’t help her she will make her life hell

Of course, there’s only one way that Janie can have the influence to make this happen – she has to become the new Queen Bee of the school, the new chief Mean Girl, popular and loved (or feared) by all.

There’s a lot of that through this book – reactions are just off, people accept the existence of zombies just a little bit too easily and too quickly (to the point of making out with a rotting zombie for lots of “ew ew ew ew I didn’t need to read that). Her best friend in all the world starts shunning Janie with astonishing speed.

Her old enemies become friends with Janie ridiculously quickly. I know the whole point of the book is slowly winning these people over – but I would expect it to be slowly, not for them to latch onto their old bullying target on the first day she wears a different pair of shoes. The speed and ease of this transformation kind of undermines the entire plot of the book (which is on pretty shaky ground to begin with). The whole premise of the story is that Janie, bullied and ostracised school nerd, needs to become Queen Bee with training from the ex-Queen Bee’s zombie for a convoluted reason. This is the core of the book – and it was too easy. She launched from complete outsider to part of the It crowd with a new pair of shoes and some make up and a very small attitude adjustment.


That not only adjusted the plot but also went a long way towards damaging Matilda’s character. Yes she was a classic Mean Girl (points for “Matilda the Hun” that was good) but part of her character development wasn’t just that she wasn’t all bad, that she genuinely cared for Wayne and that Janie could see her parents and why that reflected in her – but also that Matilda was actually skilled and intelligent. Not in the same way that Julie was, but in her own way, recognising people’s cues, knowledge of fashion and make up, knowing how people react, knowing each person’s motives and ways to reach them – Matilda was shown to be fiercely competent in a way that very few books manage to portray. But you can’t hold up Matilda’s surprising skill and then have it be so easy.

Still, the idea is sound and the methods are somewhat fun and it makes for an amusing, if not as good as it could be, story of hijinks and shenanigans. The main character it’s awful – though I think much of her predicament comes from being unwilling to get Chloe, her best friend, in on the big secret. It also takes a while for me to like her since the story opens with her basically dancing on Matilda’s grave (before she’s even buried) and making plans to go to the dance with her boyfriend. That took me a while to get over and come to not entirely dislike Janie

I think I’m also suffering from a severe cultural dissonance. One of the ongoing plot elements is that the sheriff is running around trying to find out who supplied booze to the party and which teenagers attended it with dire consequences apparently looming over them. I cannot imagine anyone in law enforcement around here giving a damn about teenaged parties unless they’re breaking stuff, there’s a noise complaint or actual drugs are being taken. I certainly can’t imagine parents being happy a policeman was investigating it – they’d be far more likely to give the police grief for wasting their time and resources. And parents being angry because they’re 17 year old attended a party, DIDN’T drink and returned before curfew – and this not being seen as super-strict? It all felt a little alien to me, I kept waiting for someone to tell the sheriff to mind his own damn business or get on with dealing with actual crime.

We had two minority character – Eddie is her classmate: he’s Black and he’s there because the story needed to shoe-horn voodoo woo-woo. Other than that he isn’t stereotypical – being more of a weird character of randomness (or so described, we never really had any examples of that beyond Janie telling us he was weird and random). He was also described as having skin that always made Janie crave chocolate. And there’s her cousin Bennie who is gay – a flamboyant theatre actor who hated that his parents were accepting of him coming out because he didn’t get a “tragic 80s montage.” I actually am pretty speechless at the awfulness of that line; that “tragic 80s montage” is quite literally death to a lot of GBLT kids.

She calls Bennie at the last minute to pretend to be her boyfriend and take her out to, as he thinks, make a guy at school jealous. He drops everything and hurries over to serve.


In all, it’s not a bad little story. It has amusing moments, it ends awfully neatly and it challenges some assumptions rather than let even the Mean Girls rest in their eternal pit of evil – but it was also shallow, it didn’t explore its concepts as well as it could, it had huge leaps of dubious characterisation and events I wasn’t able to run along with.