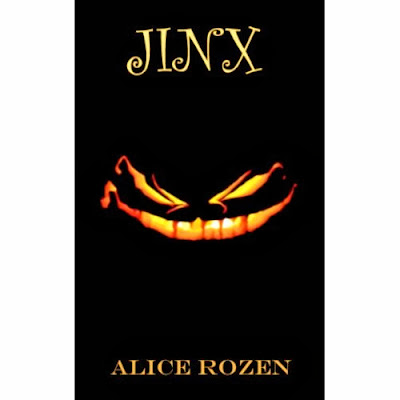 10 year old Jinx is just that - a jinx, terrible bad luck follows her around and leaves her very much the outsider.

When her long lost mother – her long lost demonic mother – arrives so much more comes clear for the young witch as she’s gifted with her grimoire and good friend and bodyguard (alas, no broomstick). Things are looking up this Hallowe’en.

Such gifts were just in time – because there’s dark magic afoot this Hallowe’en and the whole town is left in an enchanted sleep; it’s down to Jinx to save the day.

I made a mistake accepting this book for a review. I read over the email a little too quickly and focused on the GBLT character and said yes. Then the next day I looked back and realised I just accepted a children’s book.  Oh dear. Well, I’d agreed and I don’t go back on that – so I took a deep breath and turned to the book

I wish all of my mistakes could end so fortuitously.

It is a children’s book – meaning it is accessible to children. Parts of it are pretty simple and simplified, it’s not long and it’s not too twisty. But nor is it patronising, simplistic or boring – in fact it’s more than passable as a YA book or more, if it weren’t for the protagonist being 10. I think it’s accessible for children but unless you went in expecting a children’s book you wouldn’t know it.

The plot was fun (if a trifle unbelievable in places – like how quickly Jinx accepted her heritage or her random exploration of someone’s house). It was funny, it was witty, it was clever and it had some interesting original elements and plenty of imagination. The word use was excellently chosen and still very accessible and the whole thing was a joy.

Jinx is confident without being arrogant or cocky. She knows when she’s outmatched and also when she has a chance. She’s heroic and brave for the sake of protecting others, but also forgiving and able to see things from other people’s perspective – while not letting them forget the wrong they’ve done. I love that she is very intelligent – and aware that she is younger but that doesn’t mean she is lesser or less intelligent

“Being a child doesn’t mean I’m an idiot, it just means I haven’t had as much practice at life as people older than me.”

She refuses to be patronised or dismiss her skill or potential or decide that since she’s a kid she can’t possibly make a difference or that, as a girl, she needs a prince to rescue her.

“I order you not to catch me, carry me, or rescue me in any way. If I can’t do this without a prince saving me, then I’ll hang up my hat for good.”

And she’s very clear that while other girls her age may very much want to marry a prince one day, she’d rather marry a princesses. Almost unheard of in a children’s book and perfectly fitting the character, the setting, the character’s age and the age of the audience.

I was pleasantly surprised, it was a fun book – and I hope more of my mistaken selections end so well. I was all prepared to judge this book on whether I thought a child would enjoy it (and I definitely think they would) and never realised how much fun I’d find it!