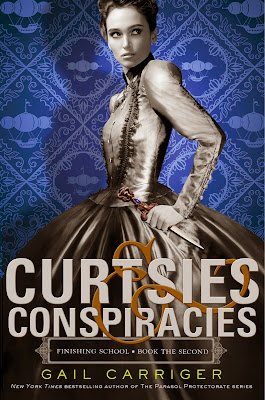 And there are definitely plots afoot, the airship school is moving to London to examine a new technology which seems surprising – and suspicious. There is definitely something covert going on – something that Sophronia would investigate anyway, but has all the more reason to do so when her best friend seems to be threatened by it. She has a full array of skills given to her by the spy school and she’s more than willing to put them to the test.

With sequels, it’s always hard not to seem repetitive in a review, especially if everything a book got right in the first book, it continues to get right in this book. We still have that wonderful contrast between the elaborate, stifling trappings of idealised Victorian femininity with the deadly, artful skill of the espionage agent. We still have them USING the trappings of idealised femininity as espionage tools – and this is even further emphasised with the boys from Bunson being so very clueless and incapable because they have not been trained. The blending of these seemingly completely alien elements is such massive fun while, at the same time, continuing that refreshing challenge to the idea that a woman cannot be both stereotypically feminine AND powerful (even dangerous) at the same time.

The world is the same as the Parasol Protectorate Series but doesn’t just rest on it but expands it. We don’t just have the collection of werewolves and vampires in Victorian England with a fun dash of steampunk elements – there’s much more emphasis on the devices and gizmos that so epitomise steampunk and these in turn are interwoven with the supernatural elements. What does it mean to travel at great distances with advancing technology when vampires are bound to their territories? What will they do to escape their tethers? How does it disadvantage them when technology evolves to make humans more and more mobile while their Queens cannot leave the Hive house? It sets up a whole new angle on the world for more fascinating discovery and exploration.

This book did a good job of developing beyond its original excellent (and hilarious) premise and putting some meat on the bones. Firstly we have an extended storyline, the beginning of a meta-plot, with the rivalry between the Picklemen and the Supernaturals; and even between the werewolves and the vampires. This plot promises for lots of ongoing hooks for Sophronia to be involved in more than just random school hijinks. What particularly makes these plotlines – and the world and concepts revealed through them – so fascinating is having read the Parasol Protectorate Series, this book brings a different angle. There was never any real question of Alexia’s position on the pro/anti supernatural side with both her love interest and her own abilities so the whole question never really arose and her loyalties were obvious from a very early juncture. Seeing the same world through Sophronia’s eyes adds more levels because Sophronia isn’t inherently affiliated with any faction – and has members of the different factions all with some influence on her.

There’s also the beginnings of some development of Sophronia’s own viewpoint of her profession which adds more layers both to the world and to Sophronia herself. She’s always fiercely curious (to the point of taking steps to know everything even if it isn’t her business, even if it involves risks) and genuinely enjoys her lessons as well as being quietly proud of her extreme competence. But she’s also asking why – providing a moral and human centre to all that fierce competence and capability. She’s learning the arts of espionage, but who will she be working for? Which faction? Is she happy with that – there’s some forward thinking happening. She’s also confronted with the consequences of her actions – that the people she manipulates and uses are real people and what she does to them isn’t always going to be as simple as Mean Girl Monique being embarrassed or humiliated.

As we mentioned in the last review, there issues with Soap’s name and the history behind it – though it’s not mentioned so much in this book. We do see Soap as much more of a viable love interest for Sophronia which is interesting to see and if there’s any barrier between them it’s more one of class than race. He’s actively involved though mainly on Sophronia’s projects again, though he is established as the leader of the Sooties and he now has more of a reason to be invested in Sophronia. He’s a decent character.

is not a nice character or a major character – but nor is she not-nice in a way that is stereotypical. Minorities don’t have to saints, it’s when we mix tropes and stereotypes or cast all minorities as evil that we enter shaky ground.

We have one heavily implied GBLT portrayal (assuming we don’t take knowledge from the Parasol Protectorate and apply it to characters in this series – we have characters here who are overtly presented and portrayed as GBLT in the Parasol Protectorate but haven’t been in this book or series) and it’s Lord Akeldama. Which we’ve already spoken on at length and nothing here really changed anything.

This series is immense fun – but it’s not just fun. There’s a lot of fun and fluff there, a lot of humour and more than a little of the ridiculous – but under that there’s a deep, broad and very well developed, fascinating world, an excellently executed story and a writing style that perfectly brings us a wonderful sense of time and place that few Steampunks truly achieve. And to bring all of that together takes considerable skill – it’s an excellent read.