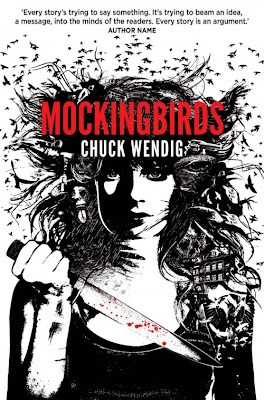 Miriam’s life is turning around. She has a home, after a fashion, a job and a long term relationship with Louis.

Unable to live in this little box she hits the road again, only to be derailed by the seemingly infinitely patient Louis who has a job for her – a friend who thinks she’s dying and needs it confirming. Seems simple enough for Miriam, albeit odd, but when visiting a reform school for troubled teenaged girls to see this woman she touches one of the students – and sees her horrific death at the hands of a serial killer.

This is a death that Miriam has to stop – and there’s only one way to cheat death; to balance the scales with another death.

Grim and dark and grim and dark. Am I sounding like a broken record? That’s right it’s the problem with reviewing sequels again! How do you review a second book in a series that has many of the same strengths as the previous book without sounding repetitive?

The answer is, of course, that you do sound repetitive – but if it’s repeating the same comments that still apply, then is that a bad thing? This book continues the darkness that the first book established. Miriam lives in a very dark, gritty, unpleasant world only exacerbated by her own self-destructive impulses. Her outlook is bleak, she has no time or patience for sugar coating everything – she knows she’s odd, she knows everything around her is pretty awful and she won’t pretend it is otherwise. She has little time for hope and largely dismisses it – things are bleak, when she has a good thing she screws it up and, due to her extremely broken self-esteem, if things were good then she wouldn’t deserve them. And probably drive them off.

But, despite those same opinions being prevalent, we still see a glimmer of Miriam’s hope. The fatalism that so characterised Blackbirds isn’t gone – but it’s reduced because she does have a way to change things – fate isn’t written. But that method of change involves killing people which means it’s not something she can use casually – but also flows into her own self-loathing and moral crisis. Her spending most of the book trying to save the victims of a serial killer means she has embraced the power of change – she doesn’t accept the inevitable fatalism of the deaths she sees – but she has to balance the cost of stopping those deaths. But this, in turn, leads to her moral crisis and further self-loathing: she is a killer. She may be a killer with the purest possible motives, but she remains a killer which is something else to beat herself up over. Especially when she realises that the killer themselves are actually approaching their kills from exactly the same viewpoint – they’re killing for what is, in their eyes, a pure motive. We’re left with the very difficult question of what separates Miriam from the killer? Where is Miriam’s moral high ground – and does she actually have any at all?

Miriam’s self-hatred is really well done and clearly presented without lots of monologues and info-dumps. Just her constant actions, her open acknowledgement of her self-destructive behaviour – her embracing of those self-destructive urges makes it clear. She not only doesn’t fit in because she doesn’t want to, but equally because she doesn’t seem to think she deserves to; and, after all, she was suicidal in the last book and those urges don’t just magically disappear.

Miriam’s relationship with Louis reflects partly on that. While most books I often expect there to be a degree of utopian sappiness in relationships, there’s no way Chuck Wendig is going to produce sappiness of any kind (unless there’s some small animal trapped in the sap and dying tragically). This relationship is difficult. Louis tries to put Miriam in a box, into a life, that clearly doesn’t remotely suit her – and even if it did she’d probably reject it because it’s close enough to “normality” for her not to think she deserves it. Which leads onto the next element – Miriam resents Louis for trying to turn her into something she’s not, for expecting her to meet standards she refuses to reach – but in turn Miriam hates herself and her loathing is only increased by her not meeting those standards. Louis’s general goodness – his generosity, his gentleness – only further increase Miriam’s self-loathing and firm belief that she doesn’t deserve him and fears she is corrupting him.

This is further added to by Katey, another figure who is almost saintly in her compassion and dedication to helping others who Miriam again contrasts harshly against. Louis and Katey seem, in some ways, less like good characters, but more idealised figures against which Miriam is supposed to measure herself and find herself wanting.

I am torn with some elements of how Miriam speaks. It’s not just that she’s rough and foul mouthed –it’s that she’s sex obsessed. She doesn’t just swear, or have no sense of the appropriate, it’s that nearly her entire dialogue revolves around sex or crotches in graphic terms. It feels like a caricature, an image of a “bad girl”. But then I consider her history. Miriam was brought up by an ultra-religious mother, very strict, very judgemental who constantly pummelled Miriam with shame – especially over sex. And then she had sex and it ended in utter, complete ruinous tragedy. I can see Miriam’s excessively sexual talk as a reaction to that – she has thoroughly embraced that “bad girl” mentality, almost worked to become everything her mother cautioned against and sex, as her ultimate undoing, is very much part of that. She crudely sexual in a way that links with her upbringing of sex=shame and her own ruinous self-worth; she is making herself into a caricature of the worst person possible in the mould of her mother’s shameful scorn.

Or I could be grasping and she could just be a poorly written foul mouthed bad-girl.

In terms of other women – we have the almost saintly pedestalled Katey, some of the bad guys and a whole lot of victims who suffer extreme, graphic – and totally unnecessary violence. It’s one thing to have a serial killer, quite another for the graphic depiction of torture and death we get. We also have 2 interesting outlooks of women one that nicely shows the need for the other: the serial killer targets women because they consider women to be the corruptors of the world – and has a long graphic spiel about it. But Katey expressly works at a school to help girls turn their lives around BECAUSE women are targeted, because women are blamed for their own victimisation and has an equally long and powerful speech the other way – the words of the serial killer emphasise and underline the words of Katey. There are some powerful messages there – including on the damage of slut-shaming and Miriam is practically a walking avatar of what such treatment can do to a girl’s sense of self – but there’s also a lot of slut-shaming, a lot of gratuitous violence and the rest that seems so damn necessary in a gritty world. It’s also worth noting that being sexual is presented as a reason behind both the female bad guy’s victimisation and turning evil – AND Miriam’s own life going off the rails. That’s a lot of punishment for female sexuality there.

There are no GBLT characters in the book – though when Miriam is suspected of creeping on a girl she is called a “gash-licker.” There are POC in the school for “troubled” teenagers which is never going to be a positive role. A Black man is a guard on the school gates but isn’t really a notable enough figure to say more about him than that.

We have the world expanding in this book and the Trespasser (as Miriam calls the hallucination/vision/dream figure) becoming more concrete as an actual force rather than imaginary friend. But it's all very vague and quite unsatisfying – more questions without answers or development.

So where does that leave me? It leaves me respecting the powerful writing of this book, being impressed by the heavy topics and themes tackled by this book, appreciating the moral complexities of this book and also not enjoying this book very much. It’s just so grim and dark and gritty and some of it feels so very forced. And while I think I see a glimmering of understanding as to why Miriam is the way she is, it doesn’t help me actually identify with her or like her story.