Written in Red (The Others #1) by Anne Bishop 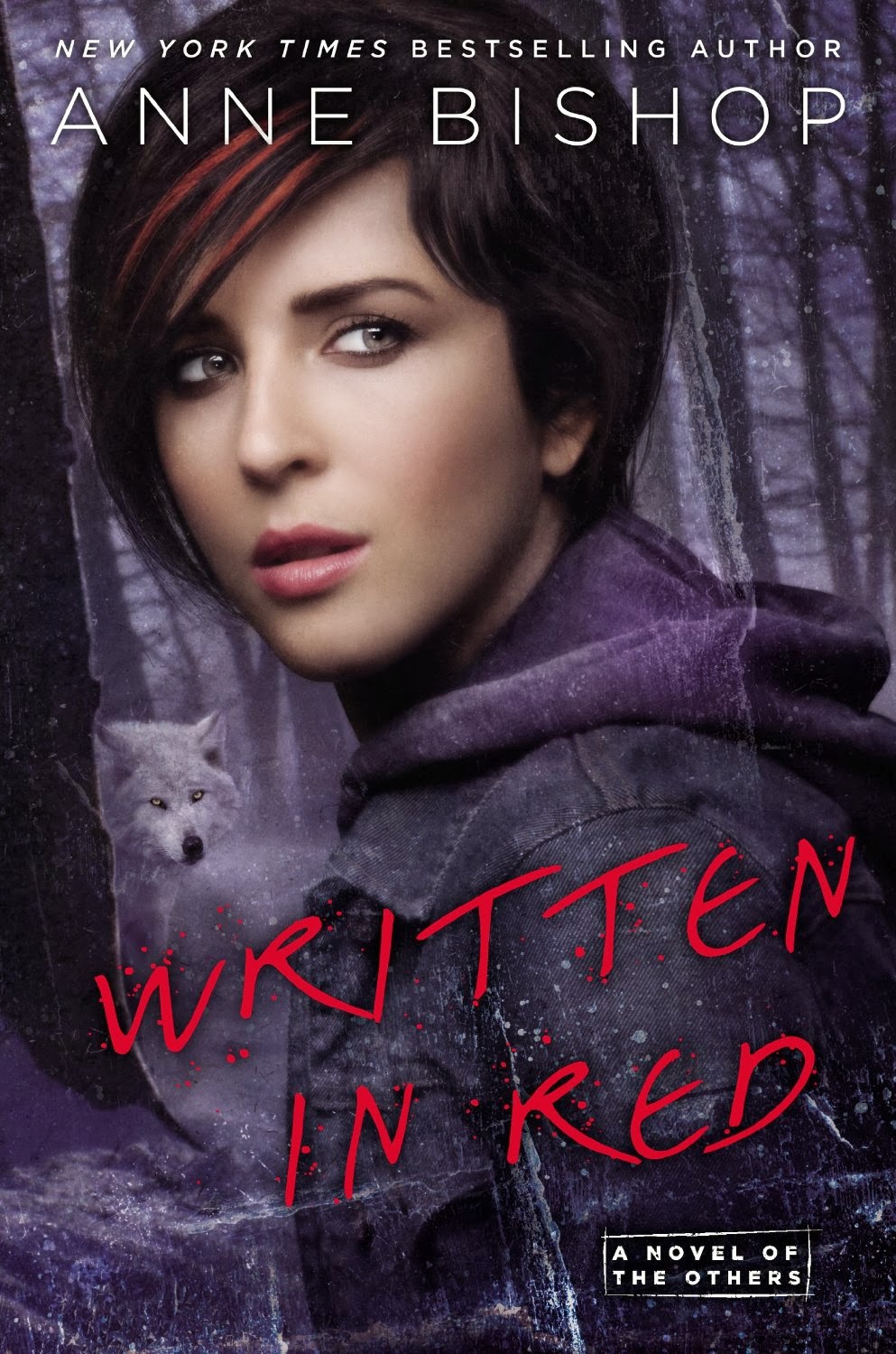 The Others rule the world; werewolves, vampires and more police the humans – and if the humans break the rules, the Elementals let rip. Entire cities have been wiped off the map when the Others have felt humans have stepped over the line. Humanity lives in a precious balance, maintained only by placating the Others

Meg is human and a fugitive. Hunted for her unique abilities she finds refuge in the one place humans have to tread carefully – a Courtyard, an Other’s community. Settling into the role as human Liaison she has a lot to learn from her sheltered life while she and Simon, the community leader, try to work together and she learns how to live with the savage and strange Others

This is going to be one of those reviews where I keep having to come back to it to describe something else that is awesome, like a kind of highly excited monkey with attention deficit disorder – all the while smiling that very silly wide grin I get when a book turned out to be unexpectedly awesome

And it was, awesome – in so many ways.

This creates a fascinatingly unique world with appeasement as a constant worry for humanity. It’s reflected in the Others as well – humans are meat to them. Food. An irritant. Several times it seems they’re looking for an excuse and they definitely have little to no compassion for humanity and no tolerance or mercy for any who break their rules. They’re ruthless, they’re lethal, they’re terrifying – and the idea of them being romantic is pretty laughable. The whole world is dark, always on the edge of massive destruction with a constant pall of fear cast over everything.

Over this excellent new world we have some truly awesome characters – including making savage monsters thoroughly likeable, immensely relatable and great fun. While at the same time never losing sight of the fact they ARE savage monsters who are happy to wipe out entire cities if they are suitably provoked.

Into that comes Meg, another awesome concept: a blood prophet. Imprisoned, enslaved, exploited with a really well depicted sheltered mentality. The way she was raised gives her a very different viewpoint with a lot of interesting ignorance’s that really play out in her character. That difference also gives her an edge with the Others – but without making her super special or perfect. She’s still afraid, but she works through that fear because of her lack of real context and experience as well as the looming alternative.

Which leads us to another awesome element of this book: growth. The characters grow – and by grow I mean learn and develop naturally rather than suddenly mutating. The end result flows naturally from the experiences and developments of the story, leaving the character highly evolved but still, ultimately, recogniseable as the same person – it’s really well done. Through that it carries the whole story as Meg becomes more confident, fills her role among the Others, and through a series of highly natural and well written encounters, she creates friendships and relationships. I really can’t praise her enough – how she learns, how she adapts, how she faces her fear without becoming foolish or reckless, how she finds friendship with the others and even adorable scenes where she plays with them (and then works on how to set her own boundaries with the Others herself). She, in turn, shifts the stance and growth on the Others around her as they find their attitudes shifting in growing respect for Meg. And all of this is done without woo-woo; oh, Meg’s woo-woo status certainly opens the door, she’d never have reached where she did without it, but the relationships are built on experience and interaction as much as special powers.

Even outside the Others, relatively smaller side characters like Lieutenant Monty are really nicely developed, with their own stories, their own goals and aims and motivations. They don’t play a huge role in the story but they add an excellent extra lens both for seeing the world and tracking the changes as the story progresses. Even the main antagonist of the book has a lot of story in her, a lot of characterisation to give her a motivation beyond simple greed. She’s textured and even, somewhat, relatable because we know where she’s coming from and what drives her. It’s one of the few times I’ve ever felt sympathetic to a character while, at the same time, hoping someone eats them while they’re still alive.

This all combines with superb writing that conveys so much of the world and characters through constant little reminders – like there being a paper ration because the Others control the natural resources and how much humans can consume – or rationing in general, or everyone’s fear of Winter’s anger.

Every scene just works throughout the book. Whether it’s Monty worrying about his family and his dangerous task of keeping the Other’s placated, or Meg playing with the Others and odd bits of silliness related to it (Nathan and Simon’s interaction over the wolf bed may be my favourite), through to the epic and terrifying action that packs the end of the book with lots of blood-fizzing-I-can’t-put-it-down-ness!

I can’t stress enough how well written this book is, how engaging the plot is, how exciting and tense, yet fun and silly it can be, nor how truly wonderful the characters are.

Of course, there are negative elements – and the glaring one is this alternate world being a very blatant Earth Parallel, because it presents the continent of Thaisia (North America) as uninhabited before Europeans arrived. Removing Native Americans from history to make your fantasy world work is beyond problematic, utterly disrespectful and unacceptably racist – which is exacerbated by the simple pointlessness of it.

You cannot remove a population because they are inconvenient.

In terms of minority characters, there are no GBLT people. Monty described as a dark skinned man and, if he’s not one of the main characters, he’s certainly a major one and a brave and wise one at that. I like his character and hope to see more of him in future books, especially since it has been hinted that he has his own story to tell as well. Vlad is described as “more olive skinned than fair” which is ambiguous at best.

It’s a shame we have this major issue with colonial re-writing in an otherwise superlative book. Because it truly is one of the best books of the year so far (yes, It’s only January, but it would have been one of the best books of last year as well). It’s a truly excellent read and it as an effort of will, when I finished it, not to flick right back to the beginning and start it all over again

I now have to wait until March for the sequel. That’s MONTHS.