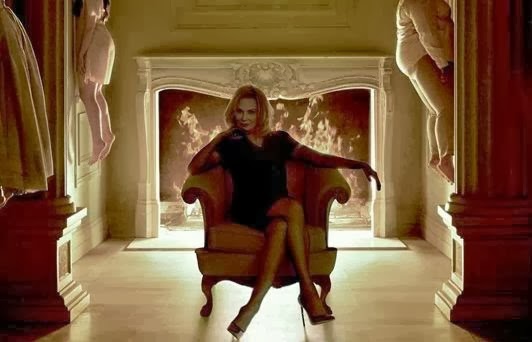 Sex sells. It’s a guaranteed ratings booster because of the titillation and few stop to question what and whom is being sold. American Horror Story Coven didn’t sell sex explicitly as we have seen in other shows but sex was at the forefront for large majority of the season. The problem is that though we saw women being sexual it was complicated by common tropes meant to specifically to “other” or slutshame. Women were divided easily into the predictable roles of: The Madonna (Zoe’s man killing vagina), The Whore (Madison who refused to be chaste) and, of course, The Aging Jezebel (Fiona who despite all of her magical power resorted to using her sexuality as a weapon). None of these representations can be said to be the least bit affirming and though they were wrapped in horror they swerved far too closely to the misogynistic roles women have historically been slotted in.


Madison is the Bad Girl of the group. Of the 5 student witches at the Academy, she is coded as the bad one. She is the meanest, she is the cruellest, she is the one who lashes out at Queenie, Zoe, Nan and Misty, often completely unprovoked. She is the quintessential Mean Girl stereotype, a girl who views all other girls as competition who need to be torn down and mocked; and more - she actively tries to kill Misty and refuses to resurrect Zoe. She takes the Mean Girl to the extreme - she is willing to kill in cold blood.


Madison is not a good girl - and just as Queenie is constantly attacked for her weight, whenever someone lashes out at Madison, it is through her sexuality. Not just from her fellow students, but even Myrtle mocks her as a “bobble head in crotchless panties.” By making her sexuality the way others attack Madison (in defending themselves against her attacks) it further cements Madison’s sexuality as part of her Mean Girl persona.


These attacks on Madison reach the most extreme level; Madison is gratuitously gang raped almost as soon as she’s introduced (and for no story reason at all), an experience she rapidly recovers from (can’t have the Whore be too traumatised by rape). And Madison is finally killed off at the hands of the man whose affections she was competing for.


Madison is the epitome of the much derided Whore persona: the evil sexual woman who is then punished and ultimately meets her end because of her unrestrained sexuality.


The flip side of the Whore is, of course, the Madonna. Zoe - Zoe who quite literally cannot have sex without killing her partner - something that has deeply saddened her. Zoe is magically required to be chaste and of the five students, she is the good one. She saves Kyle’s life and tries to cure him, she plays peacemaker among the group even as Queenie and Madison attack each other, she even tries to stop Nan killing Luke’s murderous mother.


Zoe is also Madison’s direct competition - represented in their general conversation, reinforced with their mutual competition for Kyle’s affections (Madison is far more willing to share than Zoe - but of course Zoe and Kyle share true pure love which doesn’t involve the sexual Madison. Madonna Zoe’s affections are pure and loving - her very idea of hell is breaking up with Kyle and Kyle not loving her) and epitomised in the final competition to see who would become Supreme. The whole season has had this constant battle between the Madonna and Whore raging from the very first episode and inevitably ends with the victorious Madonna and her true, pure love - and the dead Whore, reviled and dead at the hands of the man she tried to seduce.


Yet, even cast as the Madonna, it’s worth noting that even the Good One Zoe’s sexuality is presented as deadly - quite literally in her case. Even the Madonna’s female sexuality is dangerous.


And to the Aging Jezebel. Fiona is the Supreme, which means that she is the leader and most powerful witch in the coven. When we meet Fiona, we don’t meet a woman who is in control but one who is spiraling downward desperate to hold onto her youth because youth means life, power and, most importantly, vitality. Fiona teaches us that even though women will desperately strive to reach a pinnacle of beauty and glowing sexuality that it is pyrrhic victory because they cannot hope to maintain it and that it is always and forever destined to end badly. What American Horror Story: Coven does not explore is the fact that this is a mission given to all women from birth because we live in a patriarchal society. Beauty, girls are told, is the only power that women can even hope to wield.


As the supreme, Fiona has a host of impressive powers, yet what does she miss the most? Her youth, her beauty, her ability to use her sexuality to manipulate men. Fiona longs for the days when she would walk into a bar and the men would compete to command her attention. Fiona never saw her interactions with men as love based but as a means to an end - an expression of her power. Though Fiona is clearly dying what keeps her up at night is the decay of her body and not the loss of her magical power.


What completes the loss for Fiona is Cordelia’s ascension to the throne.  Not only did this remind us of the ongoing battle between mother and daughter, it solidified an ongoing theme of beauty, or more accurately youth as the pinnacle of power.  Fiona clearly states that from the moment she gave birth to Cordelia, she could feel Cordelia sucking the life out of her, thus making her a threat.  Fiona could never love her daughter simply because Cordelia only existed to be her replacement and that ultimately is the tension between mother and daughter which comes to signify their very failed relationship. Women in this situation cannot love each other and they certainly cannot nurture each other because their specific roles in the relationship forces them to be enemies. Women as adversaries is a very old trope and serves the purpose ruining the ability to form relationships and create mutual goals.  If women are kept busy fighting amongst themselves, they most certainly don’t have the time fixate on the issues that really work to oppress. To be in a relationship like this is to dance to the master’s song, twirling like a marionette without even the semblance of control.


Fiona’s fading youth and beauty is, even as the mighty Supreme, a major loss of power for it is through that fading sexuality that Fiona expresses her power. With all her mighty magic, all her strength, she still relies on sex to be a weapon and a tool. When the Axeman offers her his love she doesn’t return it (she’s not even sure she’s capable), but she does use it - and him - to be her weapon, first against the Hunters and later as her tool in manipulating the coven to thinking she were dead. All the power at her disposal and she resorted to use her sexuality as a weapon and tool - and like Madison and Zoe, that sexuality is dangerous, even deadly


And like Madison, her younger counterpart, Fiona’s sexuality is her ultimate punishment: spending eternity in a Hell trapped in domestic misery with the man she used who she doesn’t love.


This is not the first time that American Horror Story has shown some damaging tropes on female sexuality as well as their over-use of gratuitous rape. Coven, even with its large cast of powerful women, has continued the trend and even with women with vast magical power we still see that power and these characters reduced to these tropes: the Madonna, the Whore and the Aging Jezebel.
Posted by Sparky at 9:00 AM