From Dusk Till Dawn: Season 1, Episode 1 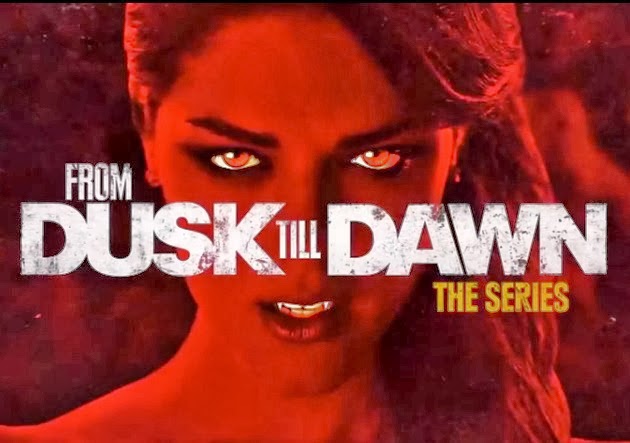 Beautiful creepy opening, a woman talks about “rising again” as we pan over a beautiful golden Aztec carving.

From which we cut to a woman running at night, during a storm, through a heavily forested, tropical place wearing very inappropriate clothes for doing so. She is chased by men in loin clothes until she runs into a man in an elaborate ceremonial costumes. I’m going to assume this is the past and these are Aztecs. He makes another reference to “dusk till dawn” because they’re really hammering the title and his two men drag the woman to a pit filled with snakes. They throw her in and she is bitten repeatedly – until one snake slithers into her open mouth and down her throat.

Cut to a more modern scene with two police (rangers apparently) in a car, the younger, Freddie, looking through crime scene photos of a series of dead women, all of which have had their eyes removed and at least one has had their eye placed in a wound  in the palm of her hand. Nasty. I think the Freddie has invited the older man, Earl to a Christening but it could just as easily be an excuse to explain how holy water works (which I’m sure will be relevant later, given the givens).

They stop at a shop in the middle of nowhere where they’re regulars for Earl to buy some booze and to ask after the Gecko brothers who just robbed a bank, killing a lot of police and taking a bank teller hostage. A bank robbery? How very retro of them. Earl pockets a nifty knife from the bathroom and goes back into the shop where he is shot, presumably by one of the Gecko brothers. Damn, the character was beginning to grow on me. But we have confirmation this show is not afraid of gore (which should shock no-one).

Either we go back in time or the man heals well – because we cut to Earl waking up in a morning going out, meeting Freddie and talking about how his dedication to the job left with him hardly any time to spend with his daughter before she went to boarding school. He’s not a very positive person and he says no when Freddie asks him to baptise his child (time travel backwards. Have I mentioned how much I hate shows that like to mix up the chronology?) and continues to be really kind of depressing – but also giving sage, fatherly advice to Jessie about making sure he spends lots of time with his family.

All this talk about not having much time just before he was shot. Poetic – lacking in any kind of subtlety, but poetic. As they get in the car the radio announces the Gecko’s bank robbery and kidnapping.

Cut to said brothers bickering, they’re heading to Mexico and Seth is not impressed by brother Richie’s itchy trigger finger. Seth keeps the peace and they go into the shop in the middle of nowhere, Seth reviewing the crime in his mind in the bathroom (apparently bothered at least somewhat).

In the shop Richie flirts awkwardly with another customer, Jessie, and hallucinates her coming on to him. As he gets creepier she calls him crazy which he is very very touchie about. She and her friend Libby try to leave – but Richie is blocking the door and holding a gun. While Seth, in the bathroom, tries to convince himself his brother is totally ok. He goes out, leaving his fancy knife behind.

To find Richie holding the store hostage and claiming they recognised him and threatened to kill him. Seth doesn’t believe him and is very not amused. Seth starts to talk things down when the cops arrive – he and Richie take the girls hostage to the back of the store, taking the time to threaten the clerk while Earl is in the bathroom and Richie has another moment resulting in the dead Earl

And Freddie, outside, hearing the gunshot. Seth barricades and fires at Freddie to get him in cover while Richie shoots the clerk as well. Just because. Firefight while Seth reminds Freddie that they have nothing to lose

Earl is a tough old guy and isn’t dead – still gasping threats at Seth and wise mentor advise to Freddie. I think I might like this guy.

Unfortunately, Richie is still having “moments” seeing the women they’ve taken prisoner turn into monsters. Seth is on edge worrying about what Richie will do next including randomly killing the hostages (Richie doesn’t understand why Seth cares).

Seth calls their contact/backer/helper Carlos (a big organised crime blokey) who they agreed to pay 30% of their loot to, to explain the little problem that has prevented them crossing into Mexico. Seth agrees to up Carlos’s cut if he helps – Carlos agrees. Carlos also advises Seth to trust his hallucinating brother because he “sees things you don’t.”

Seth tries to threaten Freddie with becoming the “Lone Ranger” again and, to save Earl, Freddie gives up (Earl does Not Approve).

Flashback to Freddie and his wife and child and his wife doesn’t want Earl to be a godfather – he’s too old and can’t raise the kid if both Freddie and she dies (I didn’t realise there were people who still took that aspect seriously) which Freddie thinks is a great idea since Earl is already his father figure. She agrees on the basis of the relationship between Freddie and Earl

With that “he’s-almost-my-father” back story, Freddie giving up makes more sense and he’s now trying to staunch Earl’s wound. Earl is not amused by him giving up nor is he happy with prioritising saving his life over catching the Geckos. Freddie tries to talk to Seth to get medical attention (and distract him from Pete, the clerk getting something from his safe)

Richie is still tormenting the young women hostages and becoming ever more delusional and paranoid. And Seth’s stress becomes so much worse when Carlos tells him he can’t rescue him – he needs to meet them at the border at a bar.

While Freddie and Crusty Earl make their touching goodbyes (and Earl demanding Freddie hunt down and kill the Geckos no matter what), Seth tries to figure a way out and stop his brother killing everything that moves for shits and giggles. Earl apparently dies. Richie goes to kill the hostages, Freddie ducks into cover and Seth shoots him, injuring him.

And Pete the clerk takes out his hidden, illegal gun and throws it to Earl who gets up oozing badass all over the damn place and shoots Richie in the hand.

Bullets fly, there’s a lot of dramatic slow motion. Seth shoots Freddie twice more… and Earl runs out of bullets. Earl puts on his hat, because he’s a badass, and informs them he will be waiting for them in Hell. Richie shoots him then hears one of his hostages tell him she’s the only thing that can protect him. Then we hear something growl – and Richie falls to the floor cowering away from 2 monsters

Seth goes to investigate – Pete also seems to have died from his wounds – and finds the two hostages giving his brother a good kicking. Seth is rather nice about getting them to stop and one hostage tells him that there’s something really wrong with his brother. I think Seth is very very aware. The two hostages glare at him and leave (I actually kind of love this, they just up and leave glaring at him. Screw this hostage crap, they’re out of there).

Seth sets the place on fire and gets Richie out. And reminds him about what low profile means. Seth does an excellent acting job of looking very worried and torn about his brother. They drive off

And Freddie gets up – he’s wearing a bullet proof vest (he wears that all the time? In Texas? In that heat? Good gods man do you have an air conditioner stuffed in your back pocket?) He checks on Earl but he looks really dead this time – and remembers Earl’s dying wish – kill the Geckos no matter what.

Earl is a crusty bundle of badass joy. It’s a shame he’s dead (assuming he is, at this point I wouldn’t put it past him pulling a Rasputin). His relationship with Freddie was really well done and the show actually made flashbacks work – which is something, I hate flashbacks and shredded chronology.

I usually wait before commenting on inclusion since you can’t tell anything from the pilot, but this show does have several Latino characters and the producer (and network) has made a point of emphasising that so I doubt we’re going to see anything like Pilot Diversity.

The show has some bad tropes – but then, the film it is based on does. If anything there seems to be some interesting subversion of the tropes that were in the film. In the film Richie constantly hallucinated sexual things from women hostages – and then killed and tortured them. Changing the sexualisation to monsters is a nice step up and steps away from him being a rapist which the show really doesn’t need.

We still have the trope of the extremely dangerous mentally ill person which is tried and stigmatising and really needs to stop – mentally ill people are considerably less dangerous than non-mentally ill people; usually far more a threat to self than others but we have this “crazy psycho” meme that will not die. However, in a possible subversion, Carlos’s words suggest that Richie isn’t actually mentally ill – he’s psychic. So either this is the “psychic powers look like mental illness trope” or “mental illness let’s you see beyond” trope. Both are tired tropes, but the former is definitely better than the “crazy psycho” meme.

The only women in this episode are victims and hostages – but even they end with a pretty awesome moment, getting some measure of revenge, freeing themselves and staring down Seth which I kind of loved.

It feels like writers were handed this show, shown the problem areas and told to keep them – but spin them, twist them into something better and try to pull away from them.