The Walking Dead Volume 20: All Out War Part One 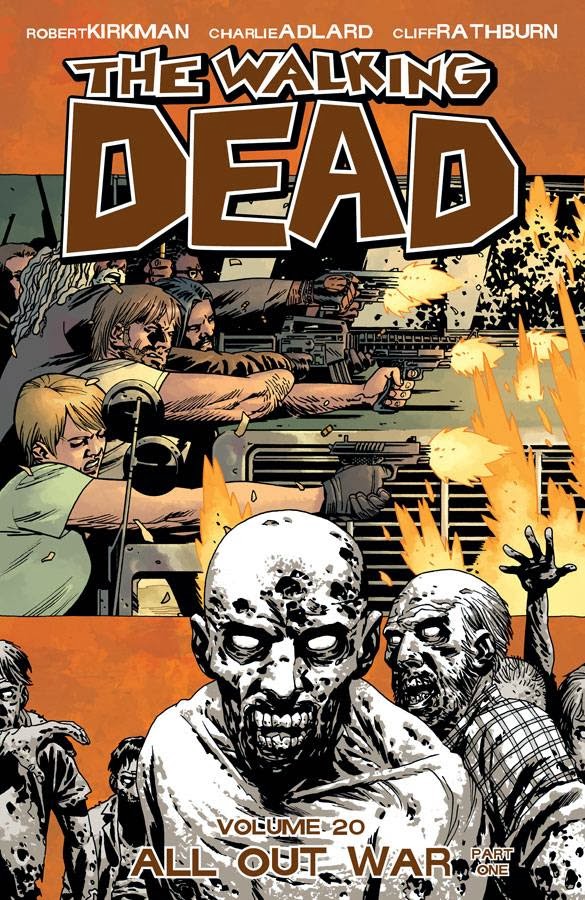 This Volume Rick finally leads the forces of Alexandria, Hilltop and the Kingdom against Negan and his Saviours

The battle is epic and the casualties high.


Alternate title for this volume:

Seriously, that was the overwhelming theme of this volume - Rick as the saviour, Rick as the hope, Rick as someone deserving of awe and near worship. Especially after last volume when Rick epicly screwed up - and was still praised by Paul as being the supreme leader.

This volume opens with Rick lamenting the pressure of being everyone’s saviour - oh heavy is the head that wears the crown! Andrea is, of course, there to tell him what a wonderful, amazing awesome person he is. Which is something we see repeated over and over - how super special Rick is, especially compared to the other leaders.

Look at Gregory - he’s not just a bad leader of Hilltop, he is a comically bad leader. In fact, I outright don’t believe Gregory could have become a leader of Hilltop - especially since they have competent members (like Paul/Jesus). Gregory is there simply to contrast with Rick and make Rick look good.

The same with Ezekiel - even though not a bad leader, his whole leadership is based on play acting, on faking and on extreme eccentricity. Again, his almost comic style of leadership makes Rick look extremely good in comparison.

If that weren’t enough, both of these leaders fail in this book. Gregory is obvious in his weakness - but he is deposed by Maggie who doesn’t take over for herself or because of her own competence, she takes over in the name of the Precious Rick! She is his disciple bringing the word of Rick to Hilltop, the whole scene is about how much a better leader Rick is than Gregory - not Maggie.
And Ezekiel - like Gregory he also fails in his attack. An attack against an easier target than Rick’s group, but Rick had not just success, but overwhelming success with few casualties, while Ezekiel’s people are slaughtered including his beloved Shiva. In his defeat, Ezekiel openly says how much of a superior leader Rick is, how much better Rick is than him, how much more experience Rick has than him and then he Takes to His Bed rather than face the aftermath.

In some ways, it’s understandable - when looked through this prism of experience - that Rick would be the better leader. But that is only because every other leader has been created to be so deeply flawed - even impossibly flawed. Rick was set up from the beginning to be not just a leader but a Chosen One, a Saviour - the way people speak of him in this book is almost religious. It’s ironic (and I wonder if it’s planned?) that Negan’s group are called the Saviours but it is Rick that is cast in that role.

Which goes back to being a rather extreme of what we have complained about before - the leadership of cis, straight white men in Dystopian fiction. All competition is cast as inferior and his closest confidants - both women, one Black, are never even considered for leadership. If Rick turned water into wine next volume, I don’t think anyone would be surprised.

Negan is a curious character - I can see some attempts to make him different from the Governor but it isn’t great. The main difference is more implication that Negan is mentally unstable: he refused to allow the rape of Holly because that was too barbaric for him and he still maintained the idea that he could still be the good guy to Rick’s people - even though he then went on to send Holly’s zombiefied remains to them. if the Governor is a sociopath then Negan is the next level up because he cannot even intellectually grasp morality - it’s completely alien to him.

The refusal to rape Holly has good and bad points - good because it is always good to reduce the amount of gratuitous rape in a story, especially when it is so often used as a shortcut to show us who the bad guys are - even Negan with his shattered morality recognises rape is wrong. But Negan also keeps a whole stable of women at his beck and call. He calls them wives and says they volunteer, but he has the power of life and death over all of them and brutally tortures their loved ones - this is every bit as much rape as tying Holly up and raping her would be. Rape does not require physical force for it to be rape.

On to some other marginalised  - Michonne’s reaction to Ezekiel’s collapse. In many ways I can understand this - Michonne has been through worse experiences than anyone else in the comics - and she brushed herself off and moved on and did what had to be done. In that context, seeing Ezekiel fold would very much look selfish and self-indulgent: she has no time, patience or pity for that. Ezekiel has a job to do, he should get up and do it - just like she did.

Despite understanding her here, It is hard to see Michonne be so tough and hard all the time and it is perfect Sapphire stereoptype. At very least it would be nice to see her confide in and open up to someone she trusts (Andrea would be ideal since they’ve been friends for so long and they’re very similar).

On the positive, Michonne deciding that sleeping with Ezekiel has the potential to be a relationship - but isn’t automatically one is refreshing. Also deeply subversive is Dr. Cloyd, a White woman, willing to sacrifice herself to save Heath a Black man - it’s a complete reversal of a trope, which usually a good thing.

Less good is the death of Eric. Yes this the Walking Dead. Yes, ALMOST anyone can die. But Eric and Aaron are two of the very very VERY few GBLT characters the comics have had - and the only 2 non-ambiguous ones at that. The Walking Dead even lampshades the erasure by having Aaron talk about being “the only 2 gay men in the world”. The number of characters in these comics there should have been a damn site more than 2. Sorry, 1. Especially since neither have been especially well developed.

I appreciate the action and these comics certainly had some of the highest death toll we’ve seen for a while.

A load of Ezekiel’s people as well! Lots of living people!

Dead: Eric, Holly, Richard and a whole lot of people in Alexandria, the Kingdom and the Saviours.