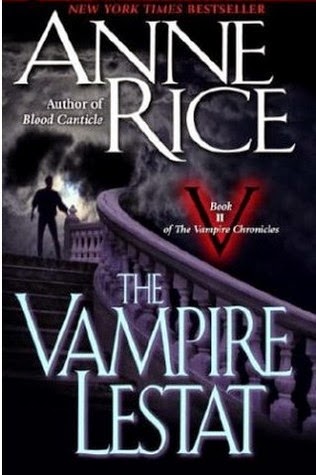 Lestat awakens after many decades under the earth. He’s greeted with a new world, a world of music and freedom and excitement and infinite possibilities

And a world where Louis has had a book written. One that could use some… corrections. Or elaborations

But far more important than that is to seek the opportunity this new world presents and produce a grand spectacle – one that breaks all the rules and will shake vampire society to its core. The presentation of Lestat’s history. All of it – to a world stage

The Vampire Lestat is definitely an improvement to Interview With a Vampire, bringing far more action, far more exploration of the world and far more revelation of the nature of vampires than ever Louis’ interminable naval gazing and angst ever brought us. This was definitely a step up.

But first let’s hit some problems I had.

Firstly, wordiness. This book was over 500 pages long and could easily be half that. These books are painfully, horrendously over-written, repetitive, prone to long monologues and incapable of leaving anything to inference. No matter what the good points are with this book, I ultimately still struggle because of this morass of excess verbiage I have to struggle through to actually reach the story. Yes, it’s wonderful to be transported to the scene with excellent, evocative language use – but that is done and then some. And then it is repeated. And no-one can feel emotion without it being described in incredible length – nothing is left to inference. There are times when it is clear Lestat is happy or angry or sad and we don’t really need several paragraphs of elaborate text telling us it.

I also didn’t particularly like the endless philosophy leveraged in – not because it couldn’t have been interesting but because, again, it’s long winded and repetitive with the same tired points repeated over and over again without any real depth or development beyond further repetition. This only gets worse if you’ve read Interview with a Vampire because it’s the same points, the same philosophy that was already repeated ad nauseum there.

Now, let’s hit some good. One of the main things I loved was the presentation of Louis as an unreliable narrator. So often books are presented as showing what was in a story, despite the fact they are often narrated from a very skewed point of view. I loved the idea that, for all we’ve read in the first book, there was a decent chance that Louis was lying about some of it. And if not lying, he was clearly misinterpreting or misunderstanding a great deal. And through that lens of misunderstanding we learned far more about Louis than we did from his own words alone.

Reading this, we can see Louis’s arrogance, the snap assumptions he makes. Someone isn’t interested in what he is? They must be ignorant, or uneducated or shallow. Someone isn’t finding rapture in what he is – it’s their limited viewpoint, not because they may have already experienced it. Someone isn’t interested in the questions? Such shallow thinking! It couldn’t be because they already have the answers. Louis, previously the deep and meaningful vampire in a sea of shallow misunderstanding is exposed as being isolated by his own arrogant assumptions and self-centredness – his own ignorance and refusal to consider that he could be ignorant.

Almost as dramatic is the transformation of Armand. Far from the enlightened trailblazer, we see the consummate follower, the man – the eternal child – always looking for someone to show him the way. Even his seeking Louis for a connection to the modern world isn’t his own thinking – it’s the last advice Gabrielle gave him

It also, obviously, gives a very new slant on Lestat – of course he couldn’t answer Louis’s questions, he’d already promised he wouldn’t. But not only that, he’d also been advised to live at least one mortal life, to experience a mortal life before embracing vampire existence; not just for him but for Louis as well. When you look back at Louis with his vaunted humanity, it’s also clear that he pretty much shunned a mortal life, becoming reclusive and ascetic even when he was alive and certainly as a vampire. If it weren’t for Claudia drawing him out, would he even have experienced humanity? While he condemns Lestat for his excess, we miss that Lestat is doing exactly what Armand would later seek Louis for – embracing the mortal world, connecting with its art, its culture and its experiences. While he condemns Lestat for not caring about the big questions of vampire origins, Lestat is focusing, again, on that mortal life – and already has the answers to those questions anyway. More, he has answers to the questions which Louis, with his rather dogmatic assumptions, would find deeply unsatisfactory.

Lestat was much misunderstood and had depths beyond what Louis guessed – he knew far more than was probably comfortable and, unlike so many vampires, didn’t actually have to seek meaning for his existence because seeking and experiencing was meaning. Which is probably why, in part, this educated, inquisitive vampire is also the eternal rebel. Every piece of advice Lestat has been given, every rule that has been imposed upon him – he has broken. Often to his own cost but always for an exciting new chapter in his story. As Armand warned, his children turned on him. As Marius warned, making a vampire too young was a mistake. But the brat prince doesn’t learn from being told – he has to experience, he has to take it to extremes. Louis writes a book for the curious to find vampires? Bah, Lestat will make a whole performance – he will make plays about it, music videos, live performances! Lestat blazes as the most compelling character out of a vast cast for his reckless wisdom, his deep knowledge coupled with an almost suicidal need to push all the buttons to see what it does – or even if he knows it will explode, to push the buttons anyway and revel in the flames. He has no preconceptions, but his own strong moral code (that, in the end, far eclipses Louis’ moralising) and endless questions he will seek the answers too – even if he shouldn’t.

I also think we need to have a word on Gabrielle showing a whole different side to vampirehood – a vampirehood that has nothing to do with humanity at all. Something primal and pure and, in some ways, scarier than any of the other vampires.

Inclusionwise, I’m sure our bright burning Lestat is bisexual. Well, 99.999999% sure, what with his relationship with Nicholas

So why do I withhold that teeny tiny percentage? Because I hate how these books write any kind of affection! It’s not that the affection isn’t clear – it is, in every long winded, overblown, melodramatic sentence. It’s that there is no differentiating between types of affection. The love felt for a brother, the love felt for a friend, the love felt for a parent and the love felt for a romantic lover are all written exactly the same way, with roughly the same amount and type of physical expression of that love and the same language use.  Now, I consider the possibility that Lestat is also shagging or all-but-shagging his own mother and has been for a long time. And then I go and find a big drink to try and purge the consideration especially since I’ve read The Witching Hour which also rather enraptured with incest.

There are POC, but they’re in extremely minor roles, or antagonist roles like the Elder told through a past recollection of an entirely different character. It’s particularly annoying that we had some ancient vampires, Asharra and Enkil, who you would think would be POC, who should be POC, but still have alabaster white skin. Which means either we have ancient Babylonian Caucasians – or becoming a vampire will make you super-duper white regardless of your previous race (even the Elder, with his “Nubian” blackness only seemed like a Nubian and it’s possible the black skin described could have been from being burned). Delving back and forth in history, the only POC we regularly see are slaves and servants.

But then I cringe and recoil from the writing that, despite the awesome characters, several times made me want to put this book down and never come back. Finding Lestat’s story is like mining for gold – only the gold is embedded in radioactive granite that you have to chip away, burning your brain, to get those beautiful nuggets out. It’s work, it’s not pleasant and it’s not fun and though the rewards are awesome… I just don’t know if it’s worth it.