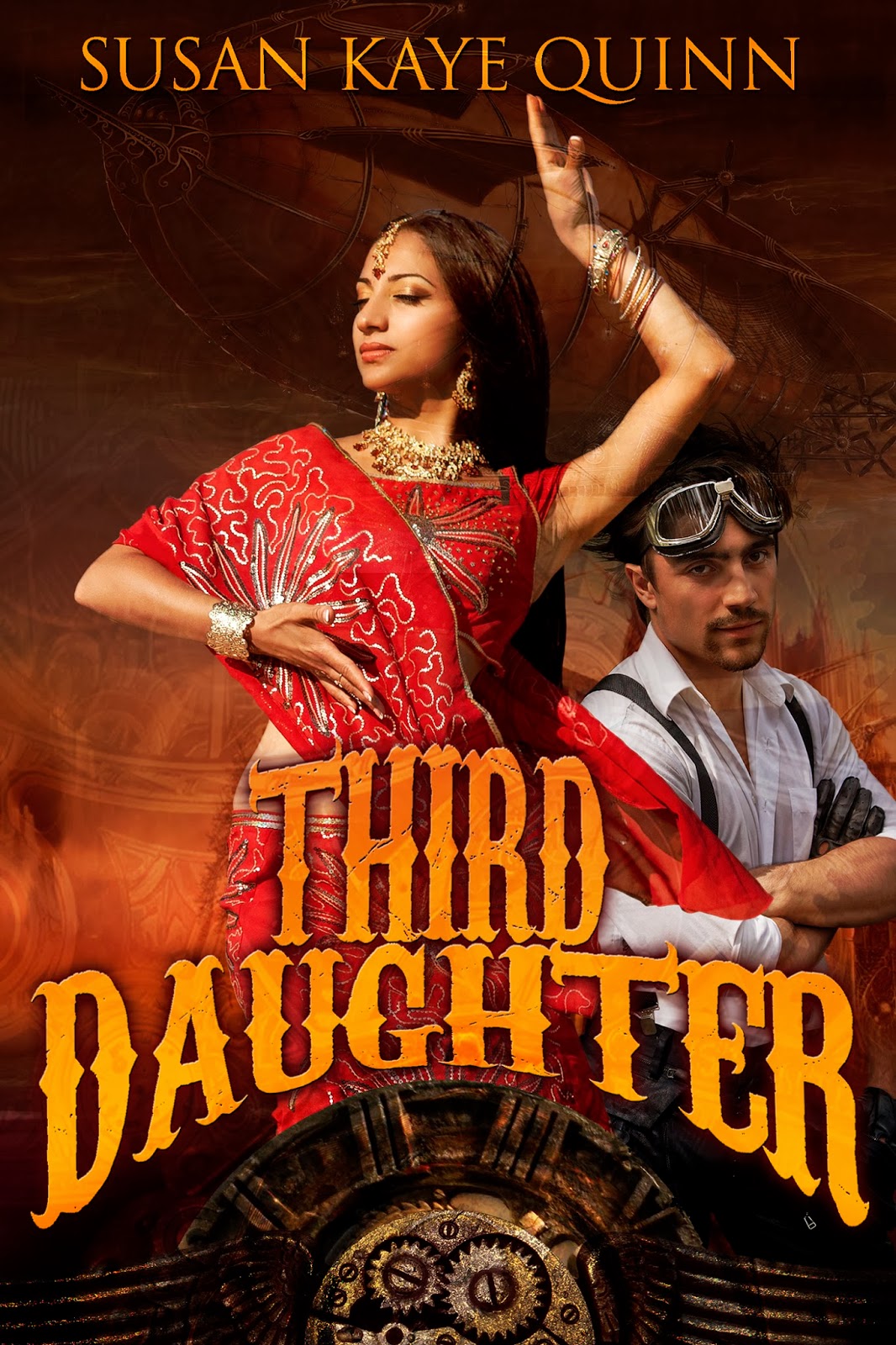 Aniri is the third daughter of the queen and awaiting her eighteenth birthday so that she can marry for love, unlike her to older sisters.  She has a drive to live life and experience the world outside of the confining walls of the palace. Aniri is forced to put her plans on hold when the Queen asks her to consider an arranged political marriage to Prince to a barbarian prince because intelligence has revealed that his realm has developed a new flying ship which would the Jungali a great military advantage.  Aniri is caught can she put the needs of her country over her personal wants and desires?

I have to say that the minute I saw this book, I was absolutely compelled to read it.  A Bollywood style steampunk, how could I resist.  I am happy to say that The Third Daughter most certainly didn't disappoint. While the basis for this story is a romance, there is so much more at play. Quinn includes political intrigue and technological advancement (as all good steampunks should).  I love reading a steampunk that moved away from a Eurocentric setting and featured solely people of colour.

Aniri at times I must admit is irritating.  She is spoiled, reckless and is fairly rippling with spunky agency. I would have found this far more problematic had she been older than 17 when this novel started. For instance, Aniri sees the Jugali as barbarians because they eat with their hands.  Having never traveled outside of a limited circle, her views are informed by others.  It's not until she begins to interact with the people and learn about their culture that she learns that different isn't backward or savage. She doesn't even realise that having the ability to ignore the intrigue at court is a sign of her privilege and youth.   To Quinn's credit, we do see Aniri evolve over the book and it is made clear that as this series evolves, Aniri will continue to mature. This is the necessary path for a YA protagonist.


All of the female characters in this novel are extremely strong.  The Queen constantly puts the need of her people over and above herself.  Further, though she does not remarry after the death of her children's father, the Queen liberally takes lovers of her choosing.  Yes, her people are important to her but she also wants her needs fulfilled.. I love that Dharian society is matriarchal and that this never becomes an issue.  The Queen rules because she has the right to rule and though her leadership is questioned by her allies, it's never because of her gender.

I suppose we should talk about the world setting.  As aforementioned, Third Daughter is set in India and there isn't a single White character in the novel. It is so rare to find a book with one good character of colour, let alone one based on the society of a culture of colour and this is particularly true of the steampunk genre.  Quinn's writing is vivid and gives the reader a great sense of time and place. While reading, I could picture the beautiful clothing and vivid scenery of the mountains in particular. In short, I became lost in the world Quinn created and ended up reading Third Daughter in one sitting.  I simply had to know how it would end..

Unfortunately, I do have to report that there were no GLBT characters in this novel.  I simply don't understand the exclusion.  If Quinn could break so many tropes with the world she created for The Dharian Affairs, I don't see why she had to enforce heterosexism though erasure.  There were several characters who could have been GLBT and that simply would have enriched the story and made it that much more subversive.  When I say subversive, to be clear, I am not applying that GLBT are the issue but that including them in this story would have been progressive given the genre's tendency to exclude them.

I think it's plain from this review that I simply loved Third Daughter.  It was full of swashbuckling goodness, strong female protagnists, and people of colour.  The writing was vivid and engaging and I found myself rooting for Aniri despite her bouts of spunky agency and youth. I want to know where this story is going and am absolutely invested in this world.