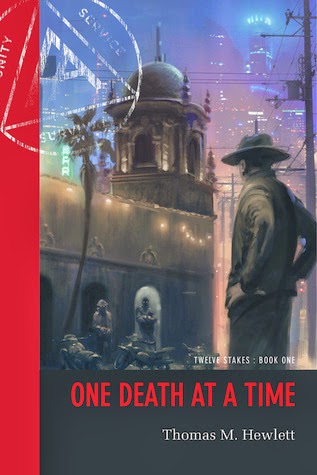 Jack was a cop in life – a dirty cop up to his eyes in corruption and booze. Until he became a vampire and started to fight a new addiction.

He’s back in LA, his hometown, no working as a detective and a damn good one with his enhanced sense of smell. But even that almost fails him when trying to find the killer of a popular Councilman and a prostitute.

Driven by a promise from the poor girl’s parents, Jack investigates – and uncovers a drug plot full of betrayal, death, fae and werewolves… and an ancient order of vampires who are interested in him

This books is a supernatural detective story set in LA and it’s positively dripping in Film Noir feel. Film Noir – the hard boiled detective, the glorious monologues, the gritty, dark city – is usually something I adore completely or hate beyond reason. It all depends on whether the author can pull it off

And I didn’t hate this one.

It works. It really works. It works even more with the vampire – world weary detective who has seen it all, been there and has very little to hope for while drinking too much and trying to conceal the last shred of hope within his cynical, harsh mask? It’s done perfectly with extra impact of this detective being a vampire who has seen it all for decades – and not always been on the side of right and good. His cynicism is mixed with a lot of guilt and a lot of regret all delivered in those excellent Film Noir monologues which should be long winded but manage not to be.

Or maybe I just have a sneaking love of Film Noir.

The character doesn’t just fit the setting, but Jack is an excellent character all round. He has history, he has depth, he has development, he has weaknesses and problems all of which are written into the story. He has strength but isn’t massively overpowered and plays a difficult game often with forces that are greater than him – but he’s still a vampire and has the power that comes with that.

The book also looks unflinchingly at a lot of things – like police and government corruption – and notes that the victims of that corruption are so often POC; there’s a few references to how racial dynamic shapes the city and interactions. As well as some excellent, sharp, lampooning of faux liberals and gesture politics. We have an entire family of Latino fae (they’re also involved in crime – but so is everyone in this. It’s Film Noir, Gritty with capital GRIT) in high office which is very unusual. The ME who is more than what she seems and definitely smart enough to put together the clues and discover the supernatural bodies on her slab is a Black woman.

Unfortunately, while there are some excellent female characters who are strong, smart, savvy and up to their necks in the action (and just a little corrupt – did I mention Gritty Film Noir?) there’s also that old thread of female victimhood that permeates the book. I don’t think anyone who resembles a major female character has a good ending in this book. There are also no LGBT people, but there are some anti-gay slurs; I’ve said it before – if you’re going to erase GBLT people at least have the decency to remove the homophobia as well.

Vampires need blood to survive, but they’re also driven to take far more than they need. A vampire who drinks too much blood or who kills when he feeds does not just kill a person, but they risk losing themselves, blacking out, becoming a feral monster who quickly needs to be put down. Addiction is shown as destructive for its victims (which is good) but also portrays addicts as monstrous and murderous, which is less so. There’s also some really extreme appropriation of Alcoholics Anonymous going on, which I can’t approve of. But there’s also some really excellent depictions of the struggle with addiction, how it affects someone, how the craving feels, having to fight that fight every day. The depiction of how they fight that addiction, of their support networks and the troubles they have are all excellently depicted as is making the addiction and the struggle an integral part of the character – something that informs and influences everything he does.

So it has some elements I don’t like, but it has excellent elements threading through there as well.

The world setting is huge and complex and dynamic – the gritty world, the vampires, werewolves and fae and no doubt more. The way they work, without any of the glamourisation or tweeness that is always tempting, even the lack of any kind of urge to make them all beautiful makes for a powerful, engaging world. I think some of the information used here was rather unnecessary and a little dumped in – but I suspect it will become relevant in later books.

In all, this book works for me. It has some problems but I love the style of the book, I love the richness of the world and the atmosphere that is conveyed with every page. I love the darkness of it, the corruption skewered by it, the self-depreciating awareness of it. And it helps to have an exciting, compelling story and some truly excellent characters whose story I really want to explore. This was a good one, bring on book 2!