Intruders, Season 1, Episode 1: She Was Provisional 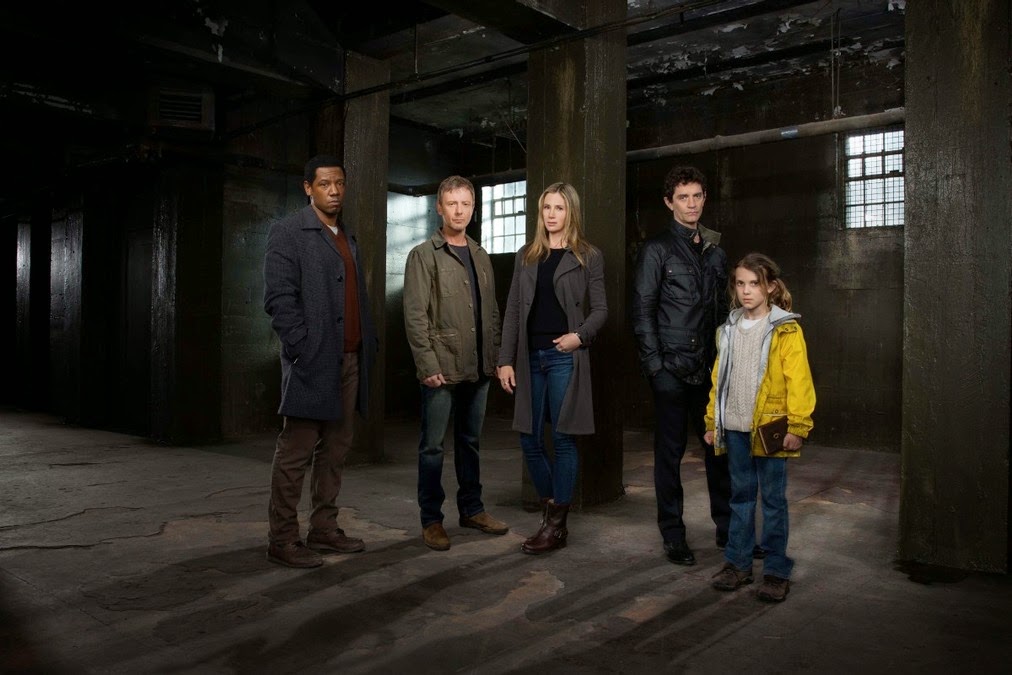 This brand new show starts in California in 1990 – so I’m going with opening flashback prologue. It’s a birthday party and the director has pulled out the most ominous music he could find. Either the director really hates birthdays or she’s just blown typhoid-leprosy all over the cake.

Ominous music continues after the party when the birthday girl is going to bed, so I’m assuming it’s not just the director’s terror over grey hairs. Ominous men approach the house. They enter the house (ominously). They enter her room and grab her –one of the men tells her they’re returning a secret to her, one she gave to them years ago (no I’ve written that sentence 4 times and it still doesn’t make sense). He holds up an odd looking medallion of some kind. We then seem to have an exorcism – she’s sick, she writhes and seizes on the bed and she chants in a language I don’t recognise. The two men leave, leaving behind a bus ticket to Seattle and a black card with number 9 on it (or an upside down 6 I guess).

The next day she wakes up lying on the lawn of her front garden. This doesn’t seem to upset her. She calmly goes inside and studies the card and ticket until her pupils expand massively (ominous music is still going so I guess they expand ominously) and she drops both pieces of paper. Moving robotically, she writes an ominous note (and this isn’t me snarking the over the top music since it includes lines like “in the beginning there was death” and “I am not Donna”). She gets in the bath, fully clothed, and slits her wrists (I assume by the bloody water), her suicide note left by the tub.

After that ominous beginning we have the opening credits that are pretty damn awesomely ominous.

After which it’s to the present day and Seattle where it is raining (I’ve given to understand this isn’t a surprising state of affairs). It’s the middle of the night and FBI Agent Shepherd knocks on a woman’s door looking for (he could also sell her some decent doors, because they’re not even raising their voices to be heard through the door in the middle of a thunder storm). He’s looking for a William Anderson. She opens the door – and the Agent (one of the two men from 10 years ago) throws her to the floor by her neck; she panics and he shoots her apparently for being noisy – and the teenaged boy in the house as well. He sets the place on fire as he leaves. He’s not a good house guest.

Move over to Birch Crossings, a town in Washington and Ominous music is replaced with sad, introspective music playing while we meet Jack an author (and ex-cop) and his partner Amy whose birthday it is. I suspect birthdays may be significant. She gets kind of odd about Jazz music for some reason. Off jazzness aside, we have a birthday cake, blowing out of the candles (in ominous close up) and apparent plans to go to Paris. They seem a nice couple but they also have sex on the kitchen cabinet and there’s just not enough bleach in the WORLD guys. And do any guys really have sex by just unzipping their flies? Because… no. While they have sex, Amy’s pupils expand just like Donna’s did back in the prologue.

Jack remarks that she’s been acting oddly and the next day that seems to continue as she goes to work. While he stays at home to write he gets a visit from an old friend and colleague, Gary Fisher.  He’s a lawyer now and he and Jack haven’t seen each other for a while – he’s come to Washington from Illinois. Jack is suspicious because he realises Gary has deliberate picked a time to talk to him when Amy wasn’t around – Gary wants to talk to him privately and not in his house. That would be the ominous coming back

They take a walk in the woods and Gary tells Jack about the Anderson murders (and how Bill can’t be the killer), claiming it’s tangentially related to an estate case he’s working on. Despite being all cloak and dagger he tries to downplay the whole thing as wanting Jack to include it in his next book if he’s interested (we also get allusions to Jack having left the force due to Ominous Events).  Jack dismisses the case, he assumes the murderer’s the husband nothing special. He goes home to angst about his wife who is at work in Seattle, she’s missed his last 5 calls.

He finally gets a call from a taxi driver who found the phone in his taxi. The cutting back and forth was confusing but it seems Amy has been missing and out of touch for two days. Relieved he has an explanation for why she’s not picking up the phone, he calls her hotel – only to find out she never checked in. He checks her excruciatingly well planned calendar which is all full – until after her Birthday when it ends with “Seattle, work”. When he keeps searching, his computer goes dark.

He goes to Seattle and gets his wife’s phone and finds the number for a Kerry, Crane and Hardy – he calls them looking for his wife but the receptionist is rather odd, continuing to tell him that Mr. Crane is in a meeting despite Jack not asking for him. He also finds some odd texts from an unknown one saying “never thought it possible” and the other “a good man is hard to find”.

He goes to a bar and charges the phone so he can read the rest of the messages which include such reassuring missives as “we have to wait until he’s dead.” Jack finally decides to call the number – and gets jazz music down the phone.

Getting whiplash yet? Because now we’re in Reno, Nevada with a conspiracy theorist, on what I assume is underground or pirate radio talking about Bill Anderson and the death of his family. His broadcast is heard by Agent Ominous who doesn’t look too thrilled about it.

He gets an unknown radio call for an Oz Turner – which would be him, though he tries to deny it. The caller wants to talk about Bill Anderson. OMINOUS MUSIC TIME. He goes to a diner and meets with Shepherd under assumed names. Shepherd wants to know where Oz got his little theory from – apparently from Bill Anderson who also has a conspiracy about organs producing sounds humans can’t hear that are doing things to people. And if you can learn how to hear them you can learn how to never die. He also mentions an ominous “them” – either Shepherd is curious or does a good impression of it to find out what Oz knows. For extra ominous, in the diner window are two neon dice, showing 9 pips.

Oz goes home to where he has many TVs set to various conspiracy news (including something called the Billberg group) and there’s a knock at his door. Shepherd has come to visit with some important news about Anderson, honest. The bait is too good and Oz unlocks his ridiculously over-secure door (he lives in a rickety trailer, I imagine you can get through the wall more easily than through that door). Oz points a shotgun and Shepherd and he confirms Oz is right, they do exist and they don’t die (or “we” as Shepherd puts it) then he takes Oz’s gun and shoots him in the head. Bye Oz.

Whiplash again – Finley Beach, Oregon and 9 year old Madison’s birthday. She doesn’t look thrilled and it sounds like her mother is arguing over the phone with Madison’s father. The girl runs to the beach where Ominous killer, Shepherd is waiting looking all Ominous with his Ominous coat flapping in the wind. He places a white disc on the beach (is that a communion wafer?) and then walks off – Madison seems to recognise it. She then goes to bed and does her level best to win the award for Creepiest Child Ever

She returns to the beach the next day – and so does Ominous Shepherd, much to her terror. He gives her a black card with the number 9 on it and calls her Marcus – then pulls his gun. She stumbles as she tries to run then begs him not to kill her, saying her name isn’t Marcus. It seems assassin Shepherd has trouble killing small children. She runs away when he can’t shoot her.

Another night and Madison struggles to breathe again, dreaming of a young man covered in blood, struggling to breathe. She wakes up and reaches for the disc Shepherd gave her, she starts panic breathing again – and her pupils dilate. She says “no” them calms down… and smiles. Creepily. She pulls out the 9 card, on the back is a number. She practices her evil smile while examining herself in the mirror, after a disdainful snort.

She goes to draw herself a bath, writing a note (ominous) and then seems to be a normal girl, petting her cat… then the next second she drowns that cat in the bath. She staggers back – a horrified and shocked normal girl again, crying for her dead cat.

Freaky Madison calls Shepherd – calling herself Marcus and saying that Shepherd brought her back too early. Very very ominously she says “what goes around, comes around.” And there’s not a lot of 9 year olds who can sound that menacing. She leaves the house.

Ok, first episode so a lot of judgement is reserved, as ever; you never know what a show will manage a few episodes in.

Still, that said, I give the show very high marks for atmosphere and feel – there is a lot of tension, some excellent mood and a real sense of the ominous about the whole thing. Yes, I snarked it – but it really did come across well.

I give it very low marks for making anything resembling sense. This show is trying to play with its cards far too close to its chest. On top of that we cut from character to character to character and it all feels a little confused. I meshed their storylines back together again simply because the cuts were not fun to follow. I’m getting the idea that we have people who don’t die by possessing others

Frankly, I’m just a little tired of shows that open (or continue) by throwing lots of random while yelling “ISN’T IT ALL MYSTERIOUS?!” because it’s hardly ever done well. So consider me… curious but wary and with moderate expectations. I’m just left with an overwhelming feeling of oddness, of strange, but nothing else on top of that. It hasn’t even particularly intrigued me because I think it’s trying too hard to be cryptic.