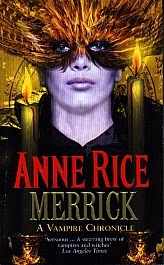 At Louis’ request David gets back in touch with Merrick Mayfair, a powerful witch and member of the Talamasca. He has known her since she joined the order as a child and knows her long, powerful and often frightening history.

But that history may be why she can do what Louis needs and call on Claudia’s ghost to confirm for him whether the child vampire has reached a peaceful afterlife or suffers as a ghost. And David’s connection to Merrick may be why she’d want to do it.

Though Merrick may be playing her own game

So, Louis wants to get in touch with Claudia’s ghost because the angst monster needs fuel for his eternal mope. To do this he contacts David who in turn calls on a contact he has in the Talamasca, Merrick.

And then tells us her life story in excruciating detail

I think it’s a good thing vampires don’t eat, because every time they ordered a pizza they’d have to pause to have an epic monologue on the delivery boy’s history. I’d actually be wary of working with these vampires simply because if you do anything for them they demand a full biography – which they then apparently put into print and share with the world. It’s one of the unknown vampire afflictions – can’t go out in the sunlight, blood diet and compulsive biography writing. Honestly, I do not even remotely understand the need to tell extremely long, irrelevant back stories to characters that we know nothing about and have little, or no, reason to care about.

I need an aside on the Talamasca – since I’ve previously called them the Talastalkers. Their motto is “We watch and we’re always there.” I presume this is because “We Know Where you Live and Where Your Children Go to School” and “We’re In The House!” were both already taken.

When I first saw that David was the narrator of this I celebrated. For a brief, deeply frightening moment, I thought Louis was going to be the POV and we would have lots of whining. At least David doesn’t whine… oh how wrong I was. No, because now David has thrown his hat in the ring – he too will compete for the title of whiniest one of all!

Between the moping, excessive descriptions and unnecessary art references (honestly, I do not understand authors who try to shoe-horn in these references to show us how knowledgeable they are) there was a surprising lack of philosophising to a degree.  But it does seem that everything Lestat learned and we endured during Memnoch the Devil has been forgotten. There was even one interesting philosophical point of Louis refusing to upgrade his power level, even if he would then not have to kill so often, because that way he is capable of suicide, capable of dying which inherently makes him more human than, say, Lestat or David who wouldn’t know how to kill themselves even if they tried.

I do think the central reason for what Louis was doing was kind of lost – we ended up with Merrick’s back story for 90% of the book and then we finally get to Louis’s aim of seeing if Claudia’s ghost exists or not it all gets cut off and dealt with rather quickly. Louis has his dramatic moment, he gets over it, business as normal. I think it would have been more impactful if every character in this series wasn’t capable of having massive melodramatic moments every 5 seconds then Louis’s actual emotional outpouring could have actually meant something. But like the boy who cried wolf, the vampire who moped angstily isn’t listened to.

I don’t mind Merrick as a character. There’s an element of the conniving, deceitful manipulator about her but at very least she is a powerful, strong woman who knows what she wants and seeks it out. I actually celebrate that we finally have someone in this series who pursued their power, their destiny, without any shame or hesitation or endless philosophising. I assume this will come in later books

Thrown in to this are a few male bisexual = sexually preys on the young references. Yes, yet AGAIN and it was really hammered home this time with David (David makes references several times that he’s only attracted to men but he’s also very very attracted to Merrick) being the predator.

“Now let’s talk about you and that boy, Joshua. Seems he was mighty young”

“You can do women, if they’re young enough,”

“David? She’s just young enough for you. She’s got some of the little boy left in her, don’t she?”

These are just a few excerpts. We also have a reference to Julien Mayfair, incestuous paedophile bisexual from the Mayfair Witches series. I said it last book and it’s just continued – bisexual men sexually preying on the young appears in almost – if not every – book by Anne Rice I’ve read. That is a problem and, frankly, I’m not just tired of it, I’m angered and disgusted by it. I deal with enough hate groups calling LGBT people sex predators without reading an entire series of books that pushes the meme.

We have a number of POC in this book including Merrick and her relatives. And there are some attempts to address some major issues like passing, losing culture and family history, conflict over light or dark skin and a whole lot of complexities that are addressed there. There was also a strong element of their White relatives carefully keeping them at a distance, some of them outright destroying family history and family artefacts to try and deny any kind of connection between them and Merrick’s family; even the white Mayfair witches (relatives of Marrick) only give a brief gesture of connection – and this is after we’ve seen how much the Mayfair name and family means to them.

But there’s also a vast amount of fetishisation and exoticification of skin colour and a really really romanticised view of slavery and post-slavery New Orleans.

My ending complaint is the same complaint I have for the whole series – it’s just boring. It’s dull. It’s very overwritten, we have far too many irrelevant details packed in, stories of the distant past are told with more irrelevant minutiae than even current experience. It’s clogged with ridiculously melodramatic emotional outbursts (can everyone stop whining and can everyone stop falling in love with every passing stranger after 2 seconds of acquaintance). We have vast backstories of characters before we’ve been given any reason to care about them or invest in their stories. There’s just so much here, so many words, and I’ve been given so little reason to care about any of them. For all the creepiness in the story and all the angsty drama and other problems I have, ultimately what really makes this book a chore is its dullness.