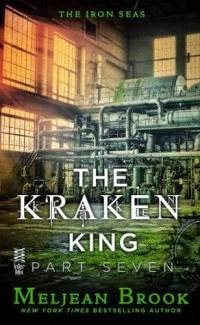 Zenobia and Ariq continue to campaign for the Empress to withdraw her fleet from Krakentown – but as the delay stretched, Ariq worries what could be happening to Krakentown in the meantime – especially since there’s an ominous silence from his home.

There is little hope when they finally get to speak to anyone in power – because the plot reveals the existence of the Skybreaker, the devastating war machine the conspirators wish to force Ariq to give up; the Empress is not going to allow it to be in threatening hands

Or any hands but her’s.

The Kraken King has now done what I never thought it would do – it has taken an established romance and run over it with that so pervasive romance trope – the convoluted misunderstanding. Zenobia and Ariq both fundamentally misunderstand what the other has said and what the other meant and it shakes a lot of what they thought about the relationship – leaving them both hurt and unhappy.

Perhaps more surprisingly, it actually did this most tiresome of tropes is done in a way that doesn’t make me hate it (even if I don’t love it) since it’s moderately reasonable (though, like every time this trope arises, a simple conversation could address a great deal – but unlike most of the times this trope arises, not all) and the rift doesn’t come from making massive negative assumptions of the other but from reasonable mistakes and personality crashes

Zenobia has trust issues – and reasonably so given her background and history. She also is an extremely practical woman who ensures she is secure and has contingency plans. Ariq has, throughout these books, worked to “breach Zenobia’s defences” and get through her habitual mistrust – and he thought he had, he thought that certain actions she took and certain risks she took (spoiler dodging!) ensured she finally trusted him. And she did, kind of – but she also took precautions and had a Plan B and, basically, still had a “how to escape from Ariq” plan ready. Ariq is not just hurt by this but hurt because it never occurred to him to make a “if Zenobia leaves me” reservation plan.

Then this is compounded by Zenobia’s abandonment issues – again, stemming from her past and the frequency of her being kidnapped/threatened in order to coerce others (her brother or Ariq). Frankly, people have very logical, sensible reasons to abandon Zenobia to her kidnappers rather than give in to their demands/risk a rescue. And she’s a practical woman, she knows this – but still fears it – which all runs aground on Ariq deciding to tell Zenobia what he thinks she wants to hear rather than what he feels; taking her trust issues to mean she wants space he offers to let her go where the abandonment flares

It’s actually a really reasonable conflict that is very much attuned to the characters of the people involved. I don’t hate it, as I said. But at the same time I don’t particularly want it in the middle of this battle to save Ariq’s town and people and all the political intrigue that’s going on and around. Not because this romance trope is bad, but because the rest of the story is so good that I didn’t want the focus to shift away from it for even a minute. But the focus was generally good – I especially liked that Archimedes and Yasmeen joined the story in this book but didn’t take over – a dangerous risk when bringing more established characters from previous stories into a current story.

The plot continues to be swashbucklingly awesome with excellent, tight fast paced writing, a lot of humour which so makes this series – all with that deep element of emotional, pain, loss and fear that hits just the perfect note. We don’t have vast scenes of angst or monologue, we don’t have the pain skipped over – it hits the sweet spot in the middle

We even get a bit of Zenobia’s wonderful battling as a writer, scrapping her manuscript so dramatically as well as the evolution of her characters as she herself evolves which I think is a nice touch. And we expand with Zenobia’s mother’s history as well as their own with her abusive family and the utter condemnation for how she was treated while it is laid out in stark, spare terms. I like how this enters into the conflict Zenobia has with Helene since it both highlights the wrongness of false equivalencies with such terrible circumstances as well as showing how Helene is Zenobia’s friend, valued as such – and continues to be Zenobia’s friend even when Zenobia is so hurt and outraged by her that she needs a break from her; there’s no suggestion that a friend cannot hurt you like that or that Zenobia should forgive her – but nor that it’s an automatic break in their friendship.

Everything I’ve said about diversity in the previous books continues through this one. A decent selection of female characters, a variety of strength an excellent, diverse array of POC with new slants on colonialism, imperialism and cultural clashes and ignorances but with a complete lack of LGBT characters.

This whole mini-series has been a treat, I can’t wait for the last installment