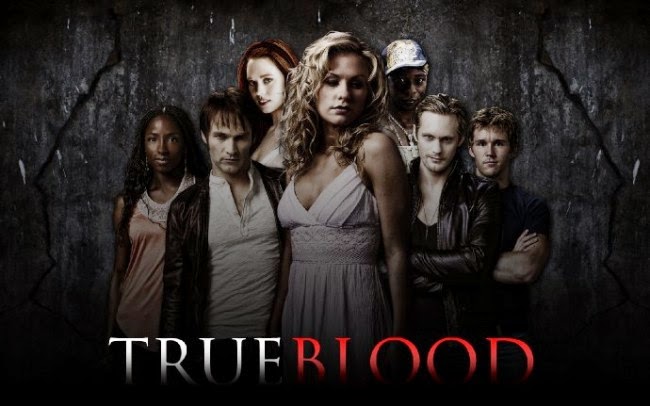 Sarah/Noomi is stll hallucinating away and has been found by Eric, Pam and the Corporate Yakuza Texan (only recapping True Blood would I ever type such a phrase). Sarah embraces death and goes to Eric because… well, very little Sarah did made sense before so she’s hardly going to start any time soon, especially since she now has a messiah complex. Eric would much rather kill Sarah than live and save vampire kind while Pam holds a gun to her chest and is willing to kill herself if Eric kills Sarah.

Everyone here just wants to die.

They go to Fangtasia and Gus reveals his full dastardly plan. Sure they can (and have) created cure blood from Sarah which they could sell – but instead he’d rather produce New Blood that doesn’t cure the disease… but treats it. So vampires would have to keep on buying it – as he tells Sam and Eric to make them agree not to tell anyone about the cure.

To Bill and Sookeh who are all post-sexy glowy and talking about how Queen Sophie-Anne (remember her?) wanted to use Sookie to breed a legion of tasty tasty fae snacks and that was why she sent Bill to go get her. He didn’t because Sookie was so special and lots of love and gooeyness and how unworthy Bill is of her.

As he abuses and beats Lettie Mae, young Tara finds her father’s gun – she considers shooting her dad  before deciding to bury it in the garden – just because her dad comes out and leaves with Lettie Mae begging him not to. When he’s gone she despairs of continuing alone.

In the present, Reverend Daniels finds the gun Tara buried. Tara, now coherent, tells Lettie Mae how she’s sorry that she couldn’t pull the trigger, that she should have; while Lettie Mae says it wasn’t Tara’s job to save her. Tara praises her as a good mother and she wasn’t weak – bad stuff happened to her. She tells Lettie Mae to forgive herself – and let her go. After a hug goodbye, she disappears.

For some bizarre reason (even by True Blood standards) Bridget, Hoyt and Jason decide to hit Hoyt’s baby photo albums which has Hoyt having an angry, grieving rant at Bridget over the idea of having kids. Jason is distracted from the Awkward by a text from Violet of Adilyn all tied up and kidnapped and Jessica. Jason leaves to run to the rescue and Bridget decides to join him because the way to storm out of an argument with your boyfriend is totally to join a policeman on a kidnapping case, right? Then refuse to get out of his car.

They arrive at Violet’s house and Jason gives Bridget a gun (Bridget has just realised following a police officer into a dangerous situation is actually, well, dangerous). Jason enters the house full of elaborate decor and taxidermy (why was Violet living with Jason again?) Violet easily ambushes Jason, has a rant about how she’s the most perfect, irresistible woman in history and how no-one leaves her, before taking him to where all the prisoners are bound. She chains him to a St. Andrew’s cross. She then performs her bad guy epic monologue on torture and rape and torture and how Jason should have just worshipped her before Hoyt shoots her in the back and kills her

Well, that was anti-climactic. I guess vampire ears turn off during ranting

Jason unchains Jessica but she only has eyes for Hoyt then gets all sad eyed when Bridget appears. Nope, I forbid another love triangle/square/dodecahedron! I forbid it! Andy arrives and there’s lots of hugging and reunion. Jessica and Hoyt have a moment. Jason and Bridget have a moment. I have a drink.

Jason and Jessica have a moment outside Jessica’s house – and yes, I have another drink. The next day at Bellefleurs Hoyt talks to Jason about how compelling Jessica is to him because, really, why wouldn’t you have this conversation with a near stranger? Hoyt decides to visit with a care package of a pint of his own blood (since he’s uninfected) awww, isn’t that nice? More people should visit with unrefrigerated bodily fluids! Do you have to write a thank you note for that? Jessica is awake (despite, y’know, that being virtually impossible for a vampire during the day –pfft, who needs canon?)  Yada yada romance romance romance.

To the Sookie household and Eric visits to show Sookie his uninfected healedness. She tells him that Bill is super sick. Eric tries to make excuses and eventually uses the sun rising to leave promising to come back

Sookie responds to this by running out into the evil vampire-haunted darkness barefoot while wearing a dressing gown. Because she’s Sookie. Any other character would have been eaten a dozen times over. I’m having another drink

She makes her way to Fangtasia (finding the time to get dressed on the way). Gus isn’t happy. Pam’s look speaks volumes. Eric dismisses her as just a “fangbanger” and when Gus considers killing her he brings up her brother in the sheriff’s department as reason not to. He offers to glamour her instead – Sookie pretends to be glamoured (yes she caught on, challenging 7 seasons of my opinion on her intelligence. But then there’s still the whole running through the vampire haunted night in a dressing gown thing).

Because of what she heard in Gus’s mind, she decides to investigate Fangtasia’s basement and finds Sarah Newlin. After listening to her babble, even Sookie realises that Sarah is far more bearable with the gag on but reads the cure out of Sarah’s mind. Even seeing the cure, Sookie is still hella pissed with Sarah and turns and leaves her locked up

She goes home and tells Jessica and Bill (pause for freaky Bill vision with Sookie holding a shadowy building).

Gus, conveniently, has to leave town leaving Eric and Pam to go down into the basement (Pam snarking away awesomely) to meet Bill, Jessica and Sookie already sneaking in. Jessica reminds Sarah how much she hates her as well.

Bill refuses to drink. Y’know, I’d ask why but I really don’t care, it will doubtlessly be a ridiculous angsty reason and it won’t matter because he will live ANYWAY and True Blood shouldn’t taunt us with musty death if they won’t deliver.

Ok, to unpack the episode.

Tara and Lettie Mae. Ok, do I like the reconciliation? Yes. Do I like that Tara and Lettie Mae have had their backstories analysed? Yes. I also like having lettie Mae developed into something more than a pitiable addict or comic relief. I also like that, if Tara’s ghost was going to hang around and comfort people, it would be Lettie Mae and not Sookie. But we have even further demonization of Tara’s home life and family and this whole thing comes with mega-epic tonnes of too little, too late. After 7 seasons, we explore Tara’s background only after she’s dead? After she dies off screen? After she dies with barely any acknowledgement and for no reason at all? After 7 seasons we finally decide to get to this and Tara’s relationship with her mother? Too little. Too late.

Violet –will anyone miss her? This character has been awful since the very beginning. The show had no idea what to do with her, no idea how to develop her and no will to do either. They could have done something and had an older female vampire who was powerful and dangerous and not dead and not obsessed with a man. Instead she was obsessed with a man and now dead – and in her brief presence on the show she was a cringe worthy cartoon of ridiculousness who has just thrown out ridiculous or problematic or both bullshit week after week. If this nonsense was the best they could do with her, why have her hang around at all? Why not have her leave after being freed rather than cluttering up the place?

Sarah – I actually quite liked Sookie leaving her to rot and Jessica getting in her face. Sarah Newlin is the cure – but that doesn’t change the terrible things she did , the fact she is responsible for the plague in  the first place and the fact that these characters have every reason to want to feed her slowly through a woodchipper feet first. All too often in fiction we have this idea that forgiveness is an ideal that all good people should aspire too. Someone who doesn’t forgive is a bad person. Someone who doesn’t forgive is flawed. Forgiveness is a duty, a requirement. Yeah, I don’t follow that – some people do not deserve forgiveness. The pressure of mandatory forgiveness shames victims and forbids them their anger and pain. Your forgiveness – if any – comes when (and IF) your victims are willing, able and ready to extend it, not before (or ever).