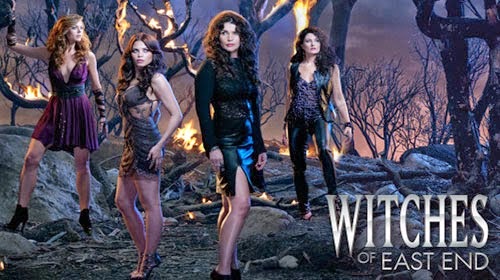 Joanna casts a spell which doesn’t seem to end well – she looks at the remains and says “Mandragora” and seems quite surprised and unhappy with this result.

What we need now is Freya dreaming up a whole dated dance scene with Dash and Killian. Its’ really really really really long and Freya badly needs the 21st century to fall on her – and Dash looks awful in a moustache. But hey, everyone would look awful in that moustache. Actually Freya needs some serious help with her sex dreams – they need 1) less pre-amble, 2) less clothes, 3) less dance scenes, 4) better music and 5) better cocaine.

Ingrid wakes her up before she gets past the preliminaries with Dream!Killian (see Freya? Less time on the dancing, more time on the sex next time). Apparetly Freya’s vivid dream is due to her using a past-life spell she took from Ingrid. This means a) Frya decided to return to the 70s BY CHOICE WITH NO-ONE FORCING HER and b) she really did have a choreographer and extras plan her sex with Killian. Ingrid thinks this is a bad idea (because it ended badly when Ingrid tried this – not because her sister is clearly a twisted soul for her wilful 70s visit) but Freya is super happy because she’s known Past-life-Killian in every past life (sometimes Dash, though not always. I assume he disappears for a generation in shame after the moustache).  Anyway this is all angst fodder for her not having hot monkey sex with Killian in the present.

Admittedly, being in the position to sleep with a) Dash or b) Killian or c) (with skill) both to having neither is worthy of a little angst. Brief cut to Dash to remind us that he’s actually a good looking man when he isn’t ravaged by a moustache.

To the plot (Freya isn’t present. Freya is the destroyer of plot), Joanna, Wendy and Frederick have a Mandragora info-dump for us – they’re feral creatures that do kill people (Joanna assumes its behind the killings). Frederick adds that evil granddaddy-who-is-probably-Odin-but-no-one-says-that trained the Mandragora into armies and sent one to hunt him; though Wendy still doubts this oh-so-convenient explanation for the serial killing which so conveniently gets the highly suspicious Frederick off the hook. Frederick continues to practice his wounded sad pathos eyes. He does have very good wounded sad pathos eyes. Kind of like a sad puppy. He also adds that Mandragora are big and dangerous and unkillable.

Alas Freya returns so the plot cringes away from the all consuming love triangle. Killian is now working in the bar again rather than live off his vast inheritance or card sharking or even going back to live wherever he was but isn’t apparently going home. This is so we can clumsily turn the clock back to Killian and Freya working together – except now that Killian knows about the whole witch thing. Killian’s all pouty because she didn’t manage to work being magical into the conversation at some point. In the name of honesty, Freya gets ready to tell Killian how much she still loves him – when Killian’s wife, Eva, enters the room and greets Killian with a kiss. Oh Freya, don’t pout, we all know something’s going to eat Eva soon – or she’ll be evil.


She stays with Dash, afraid of him, and continues to supercharge his cocaine though she has a moral quandary over what she’s doing now Killian has spread doubt and she wants to stop. He throws her across the room in magical rage that she wants to be with Killian. She does the same back and storms off.

Dash, in hospital, saves the life of a patient with magic after he dies after surgery for cancer. When he checks on Ingrid later, she notices his fingers going black – spell side effect. Dash’s shoddy latin means he’s moved his patient, Sam’s death into himself. Which isn’t healthy. She mentions her own bad experiences with trying to bring back the dead back to life.

So Dash has to go back to the hospital and “give Sam back his death” uh-huh, he runs into Sam’s mother and gets a treble load of the guilts. Luckily for Dash, at the point an injured armed robber is brought in who will live, one of the staff even comments “the wrong ones always survive” because they run a real professional hospital here.

Dash transfers Sam’s death into the armed robber – and he dies.

And Joana leads Wendy to the one person she’s known kill a Mandragora – a woman called Alex. Alex is not a fan of Joana and is kind of outraged that Joana would even think to ask her for help – which she refuses. So they go home with Joanna being cagey about why Alex hates her so much and Puppy-Frederick looking sad eyed and worried. Of course Alex arrives because she’s changed her mind in the name of the poor innocents

First bit of knowledge Alex has – Mandragora have a mate which they feed on during sex (hey there Ingrid). And if you kill the mate you kill the Mandragora – something Alex considers “collateral damage” which is somehow different from killing innocents. They prepare a trap and while doing that, because everyone on this show has such an excellent sense of priorities, Alex, a seer, decides to magically divine Wendy’s love life. This is interrupted by Joanna insisting Wendy doesn’t want to know the future and Joanna and Alex going out Mandragora hunting.

Time to go back to Freya’s flashback – she goes home to Joanna in the 70s and Alex, Joanna’s then good friend, is there. She does her love-life sight and sees that Freya has seen Killian through many lives and it always ends in disaster because they’re star-crossed. She storms back to the club to pick Killian and leave – and Dash shoots Killian. Freya wakes up from her flashbacks. She seems to have finally accepted the whole star-crossed thing and she wants Killian to be happy with Eva. Ha, too late, she’s already doing evil things to drinks (we can hear evil sounds so evil!) which she gives to Killian.

To the present and Ingrid has her own trance – the Mandragora has summoned her. She wakes up in the woods all confused and half-dressed. She goes to Dash and sees he’s transferred away the death. He dodges the whole question and tells her there’s nothing physically wrong with her to be causing blackouts. She finally asks Dash to watch her sleep.

In his room, Puppy-Frederick collapses, foaming and seizing. Wendy rushes in and magically stops it. Frederick seems pretty blasé about the whole thing; apparently it’s been happening moderately often since coming through the portal

On the Mandragora hunt, it’s revealed that Joanna pushed Alex away because she was upset and scared over what Alex read in Freya’s future  then Alex kisses Joanna declaring “passion was never an issue for us.”

They find the Mandragora’s lair – and several of Ingrid’s possessions. When Joanna realises this, she stops Alex shooting the Mandragora when it appears – she misses a killing shot and hits it in the arm. At Dash’s house, the same wound appears on Ingrid’s arm. The Mandragora runs. At Dash’s, Dash suggests that maybe Ingrid should talk to her family. At the very suggestion she attacks Dash – and the Mandragora appears behind him, injecting his head with the evil toxin

Can someone explain to me the whole past life Killian/Dash thing? Because Freya and Ingrid get past lives because they’re cursed to be constantly reborn. Ok, maybe everyone is reborn and we’re doing a “the same souls hang around through lives” thing (which Charmed already did and this show has ripped off mightily) but if past Dash/Killian are witches then wouldn’t they be immortal – or long lived – like every other witch we’ve ever seen? Or are they cursed to be reborn with Freya/Ingrid? If so, why? In fact, unless they regularly died a young, even if they lived a human lifespan one of their lives would be 2 or 3 of Freya/Ingrid’s repeated lives. But Freya says Killian was in every single one of her past lives – but she dies in her early 20s every time, that’s her curse. Even her time line is dubious – she knew Killian in the 20s, in the 50s, in the 70s. But a Killian who was a young man in the 20s has a decent chance of being alive in the 50s. Similarly, a young Killian in the 50s has a good chance of being around in the 70s. Are they multiple Killians or is he dying off at convenient moments parallel to Freya?

Also the maths feels dubious. Freya and Ingrid have now lived longer than they ever have. They're in their early-mid 20s in 2014. Clearly, in the 70s Freya cannot be far off her inevitable death. That means in the mid-to-late 70s she dies, Joanna becomes pregnant and gives birth. Either it's a long pregnancy, Ingrid/Joanna died in childhood that incarnation or Ingrid/Freya are both well into their 30s.

And how can Freya even think going missing for an entire day of work while she indulges her fantasies is ok?

Oh hey, did everyone remember Victor? He died, remember, last episode? Is anyone sad about this?

The Mandragora is Ingrid’s mate. What a shame they can’t kill Ingrid and have her resurrect because… uh. Because.

And on some problems: firstly Ingrid and gratuitous rape. Tell me that this couldn’t be changed to the Mandragora psychically syphoning energy from Ingrid, even with tentacles, without her being his “mate” and having sex. Tell me how this would not have worked just as well in the plot and not have involved Ingrid getting raped. Tell me why this rape had to be there.

Sam and his family was used as a tool for Dash angst and I think we have confirmation that Eva is EVIL. I was surprised at the appearance of Alex, a Black lesbian or bisexual woman, I am waiting before I get excited. Firstly, I’m not impressed that Joanna decided to end their relationship over a vague – and accurate – prophecy. But mainly because my cynical brain suspects that Alex will probably, at worst, die in the next few episodes or, at best, disappear again. And Joanna will never reference a relationship with a woman again (shades of Sanctuary because this kind of inclusion has been done before). So let us see with a due sense of wariness and being careful about the hope.