POC as Other: The Foreigner, The Savage, The Non-Human 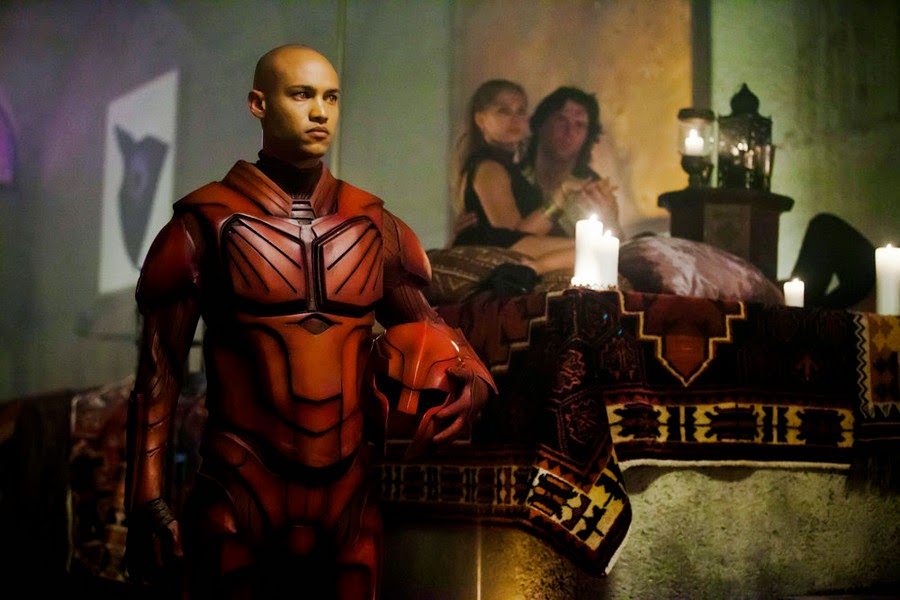 We’ve said repeatedly on Fangs for the Fantasy is that not all inclusion is good inclusion - something that is often forgotten since so many shows and books completely erase minorities or, at best, present hollow tokens that are blatantly there to tick boxes. It’s tempting to celebrate even limited inclusion - but we should be wary of given uncritical praise to problematic tropes raising their ugly heads over and over and over again
One of the most pervasive of which, for POC, is the Other. Not Like Us. The Alien. The different - repeatedly we will see something that separated POC from the “local” people (or, in extreme cases “normal” people). This isn’t the same as presenting POC with cultural markers - in fact we’ve spoken before about the removal of identity with POC characters - but as expressly Othering POC as external to the setting

A common example of this is by making all POC foreign. When POC are included they are often not local to the setting - they come from elsewhere, some foreign land, they’re immigrants or visitors or passing through or, in some cases, outright alien or non-human. This isn’t inherently a bad thing, obviously there is no problem with having POC from foreign countries to the setting nor even in having non-human POC - the problem comes when these are the only or the overwhelmingly predominant representations especially when the setting of the book/show is much more diverse.

Take The Dresden Files. Harry lives in Chicago - a city that is 55% non-White, yet the vast majority of the very few POC who appear in the city are not native Chicagoans. We have members of the High Council (emphasising how global and diverse the High Council is, which isn’t a bad thing), visiting wizards (Ramirez), foreign knights of the cross from Japan (Shiro) and Russia (Sanya); but very few actual Chicagoans are POC. This allows the (very limited) presentation of a few POC in the book while still implying that Chicago is an all White city. We also have Uriel, a Black angel - non-human POC who is by definition alien, which leads me nicely to Dominion.

Dominion is set in Vega, a post-dystopian Las Vegas. In the here and now, Las Vegas is only 48% non-Hispanic White - fast forward to Vega and we do have a fair number of POC in the city; but when you looked at actual people from Vega it is all white. All of the POC were either foreigners - natives of Helena (Arika) with it’s often emphasised different culture (nearly every time Arika or her fellow Hellenites appeared it was to emphasise her sexual nature or their foreignness and alienness to Vega) - or, tellingly, not human at all. Noma, Michael and Furiad, perhaps even Gabriel, are all POC and all angels. Again we have a setting that has presented several POC to the cameras (albeit not always for very long or in much depth), but they’re all Other, they’re all foreign or alien or inhuman. They’re all “not from round here.” We have an attempted display of diversity while still implying that the “home” location is all White.

Even in the future we get this same sense - look at Almost Human with Dorian the Black android. Again, there is no problem with Dorian being a Black man - nor is there a problem with a number of the other androids being POC (both the police bots and the sex bots). There is a problem that very few of the other human cast, both background extras and main characters combined, are actually POC. Again, we have diversity presented on the screen, even a co-protagonist presented as a POC, but we still have a trope that renders the POC as Other.

When it comes to shows set in the past this is even more pronounced as we repeatedly ignore how racially diverse history was - maintaining this bizarre idea that Europe was a sea of whiteness until, what, the 1960s? Later?

Penny Dreadful set in Victorian London at the heart of a centuries-old global empire has one POC - Sembene who, in the few times he opens his mouth to speak, is defined entirely by his foreign, Otherness. For what limited extent this servant is characterised at all, it is as the foreigner, the alien, the Other. Dracula continued the theme, though the excellent Renfield was western (and awesome) he was also foreign. Yes, so was Grayson, but Renfield stands out as the only representative of POC in London - again, implying London as an all-white city and POC as other. The only other hint of diversity are the seers - which bring us to two other “Othering” tropes - the Savage and the Mystic. Often both together - possessing strange and alien powers that are so different from the “civilised” west: something we’ve seen before in protagonists in the genre.

Da Vinci’s Demons pretty much epitomises this - despite being in extremely cosmopolitan Italy for the era. Zoroaster is a POC - but even that is inferred from the insults heaped on him as much as anything else. We have POC slaves on a ship (from foreign parts, of course), Riario’s slave Zita (from foreign parts of course), we have POC in the Ottoman empire (yes, more foreign parts) we have Quon Shan randomly dropping in to throw around some martial arts and be properly inscrutable - and also clearly from a distant land. The most numerous POC on the show are, of course, the Incas who quite literally involve travelling beyond the known world to find. Most glaringly, we have “the Abyssinian” and Al Rahim who are both foreign (the Abyssinian literally labelled as such every time he’s mentioned - his whole identity is his foreigness) and purveyors of fine woo-woo; because what sensible product of the civilised west can manage without a mystical POC “Other” to guide them in the ways of the woo-woo? Even Carlo has been away for a long time in his travels and is revealed to be part of a sinister mystical organisation; there needs to be an Othering!

This need to present POC as separate, distant, other even extends into entirely fictional worlds without the slightest basis on our own: can there be a clearer example than Game of Thrones? Completely fictional world - yet Westeros is a sea of whiteness, any POC comes from AWAY. From across the sea, from the Drothraki (who are, of course, “savages”), from the Qarthians (foreign, alien and mystics to boot) to the people of slavers bay (either pitiful souls waiting for the benevolent White saviour hand of Daenerys or the brutal, savage slave owners) we have a continued message of POC as foreign, savage, mystic and, generally, Other. The only Westerosi people who are ambiguously POC are the Dornish - but, again, Dorne is presented as a very different culture to the rest of Westeros. It is, again, the Other. Before you rush to the comments, I say again that this doesn’t mean that there can’t also be White characters who are Other/Foreign/Savage - because there can be and definitely are - but for every savage Hilltribe or scarred Wildling or woo-woo crannogman, there are Starks and Lannisters and Tyrells and Riverlands and people of the Eyrie and the Stormlands etc who present the unity of Westeros: the “home” setting - and they’re all White.

It’s not an uncommon trope and it comes with heavy “othering”; by continually presenting POC as the outsider there’s alway the sense that they do not belong or do not belong as strongly as the White people. They are always an intruder or guest in someone else’s story.