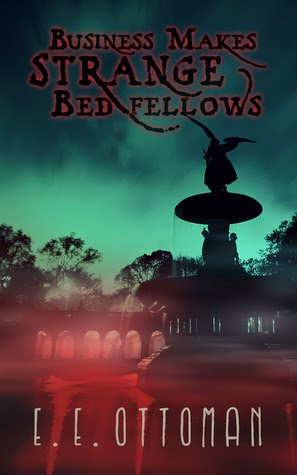 Dr. Gertrude Bowers is a scientist – studying the quasi arcane art of resurrection. She’s definitely making progress and she is even facing a conflict not of whether she can raise the dead – or whether she should

And in the middle of all that she pulls a terrifying tentacled monstrosity out of one of the bodies she’s experimenting on. That rather interrupts her work

When she hears of a series of brutal murders, she realises the monster is killing and she feels responsible. Her only choice is to make a deal with Vi, mysterious, capable, dangerous – and a vampire. And she doesn’t want money to pay for her services.

I find myself slightly frustrated by this book

I’m frustrated because there’s a lot about this book that is utterly fascinating. Dr. Gert Bower is a fascinating character. She is the heiress of a dead, wealthy family trying to pursue her career as a doctor in a deeply sexist period. She’s also exploring a quasi-forbidden and certainly highly controversial scientific/occult field of study. She is discovering the occult, discovering far more is real than she had previously expected and having whole new vistas opening up to her. But she’s strong willed, indomitable and determined to face any challenge. In fact, she’s outright intrigued by any challenge – including a vampire who wants to share her bed and blood

This character is awesome. This character is amazing. This character could do so much. This character’s story will be fascinating. Her daily life, battling her peers, her powerful curiosity discovering more about the world, her passion for her work – all of this adds up to a character that is amazing and I want to read a whole series about her. Just what has been hinted here suggests so much more to her series. She also have some interesting complexities of ethics – figuring out not just what she can do – but what she should do.

All of this hints to a much deeper world – different kinds of vampires, Lovecraftian monsters, a Frankenstein’s monster plot developing…

But these hints are what we get and, as far as I can see, this isn’t the first book in an ongoing series – it’s a stand alone. Aaaaargh – so much potential, so much that could have been done! So much I wanted to see, so much that could have been developed – it’s like watching an awesome film through pin-hole lens! There is so much potential here, such excellent characters and such an excellent world…

The dominant plot is the romance between Vi and Gert. It’s a decent romance – we’ve got a lot of very well written sexual tension between them. While it starts with a rather dubiously beginning, the book makes a major effort to establish consent and mutual pleasure – any question of coercion is removed not just from us but also from the characters. A lot of romance in books tells us (because we read from the character’s POV) that the characters are very hot for each other and wants sex – but they fail to communicate that consent to the partners (In fact, a character gasping “no” while thinking “oh yes” is, sadly, not uncommon).

I did feel that there was some rather clumsy conflict inserted into the middle of the book. Vi and Gert seemed to lose patience with each other and have a moment where Gert wondered whether she was going to continue seeing Vi. It felt odd, I didn’t quite understand where the level of anger had come from. Some irritation I could understand – actually considering not going forward seemed a bit out of the blue.

The romance is generally good – and it’s definitely nice to see these romance tropes done with more nuance and much less annoyance – and even more so to see it between two women and two women who do not present in a traditionally feminine manner, especially for the time and place.

But it felt like the whole book was just a backlot to getting these two women in bed. Even the monster they were hunting seemed to slip their minds at times (especially when Gert was considering calling the whole thing off). All of that wonderful development, potential and backstory – it’s wallpaper for the boudoir. And that’s the sense I got all through reading the book – well paced story, fascinating characters, excellent concept – and the whole thing is positively rushing towards the bedroom and is almost… impatient with the prologue.